Ágnes Keleti (born Ágnes Klein, 9 January 1921) is a Hungarian-Israeli retired Olympic and world champion artistic gymnast and coach. While representing Hungary in the Summer Olympics, she won 10 Olympic medals including five gold medals, three silver medals, and two bronze medals, and is considered to be one of the most successful Jewish Olympic athletes of all time. [3] Keleti holds more Olympic medals than any other individual with Israeli citizenship, and more Olympic medals than any other Jew, except Mark Spitz. [4] [5] She was the most successful athlete at the 1956 Summer Olympics. In 1957, Keleti immigrated to Israel, where she currently resides. [6]

Keleti is Jewish, [7] and was born in Budapest, Hungary. She began gymnastics at the age of 4, and by 16 was the Hungarian National Champion in gymnastics. Over the course of her career, between 1937 and 1956, she won the Championships title ten times. [5] [8] [9]

Keleti was considered a top prospect for the Hungarian team at the 1940 Olympics, but the escalation of World War II canceled both the 1940 and the 1944 Games. She was expelled from her gymnastics club in 1941 for being a non-Aryan. [10] Keleti was forced to go into hiding to survive the war. Because she had heard a rumor that married women were not taken to labor camps, she hastily married Istvan Sarkany in 1944. [1] Sarkany was a Hungarian gymnast of the 1930s who achieved national titles and took part in the 1936 Berlin Olympics. They divorced in 1950. Keleti survived the war by purchasing and using identity papers of a Christian girl and working as a maid in a small village. Her mother and sister went into hiding and were saved by Swedish diplomat Raoul Wallenberg. Her father and other relatives were killed by gassing in Auschwitz concentration camp by the Nazis. [4] [5] [8] [9] [11] [10] She managed to survive the Holocaust by hiding in the Hungarian countryside. [12] In the winter of 1944-45, during the Siege of Budapest by Soviet forces near the end of World War II, Keleti would in the mornings collect bodies of those who had died and place them in a mass grave. [1]

After the war, Keleti played the cello professionally and resumed training. [11] In 1946, she won her first Hungarian championship. [11] In 1947, she won the Central European gymnastics title. [13] She qualified for the 1948 Summer Olympics, but missed the competition due to tearing a ligament in her ankle. [10] She is listed on the Official List of Gymnastic Participants as Agnes Sarkany. At the World University Games of 1949 she won four gold, one silver, and one bronze medal. [14]

She continued training and competed at the Olympics for the first time at the age of 31 at the 1952 Games. She earned four medals: gold in the floor exercise, silver in the team competition, and bronze in the team portable apparatus event and the uneven bars. Keleti continued on to the 1954 World Championships, where she won on the uneven bars, becoming world champion. [4] [8] [11] At the 1956 Summer Olympics in Melbourne, Keleti won six medals including gold medals in three of the four individual event finals: floor, bars, and balance beam, and placed second in the all-around. [11] The Hungarian team placed first in the portable apparatus event and second in the team competition. At the age of 35, Keleti became the oldest female gymnast ever to win gold. The Soviet Union invaded Hungary during the 1956 Olympics. Keleti, along with 44 other athletes from the Hungarian delegation, decided to remain in Australia and received political asylum.

Keleti emigrated to Israel in 1957, competing in the 1957 Maccabiah Games, and was able to send for her mother and sister. [4] [5] [8] [9] [15] In 1959, she married Hungarian physical education teacher Robert Biro whom she met in Israel, and they had two sons, Daniel and Rafael. [16] [1] Following her retirement from competition, Keleti worked as a physical education instructor at Tel Aviv University, and for 34 years at the Wingate Institute for Sports in Netanya. [1] She also coached and worked with Israel's national gymnastics team well into the 1990s. [4] [9] As of 2005, she lives in Herzliya Pituah, Israel. [1] Keleti has been the oldest Hungarian Olympic champion since Sándor Tarics died on 21 May 2016. [17] [18] She became the oldest living Olympic champion when Lydia Wideman died on 13 April 2019. [19]

Maria Kondratyevna Gorokhovskaya was a Soviet gymnast of Jewish descent. At the 1952 Summer Olympics, she won seven medals, the most medals won by any woman in a single Olympics. 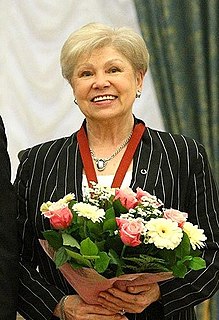 Larisa Semyonovna Latynina is a former Soviet artistic gymnast from southern Ukraine. Between 1956 and 1964 she won 14 individual Olympic medals and four team medals. She holds the record for the most Olympic gold medals by a gymnast, male or female, with 9. Her total of 18 Olympic medals was a record for 48 years. She held the record for individual event medals with 14 for 52 years. She is credited with helping to establish the Soviet Union as a dominant force in gymnastics. 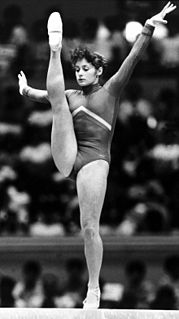 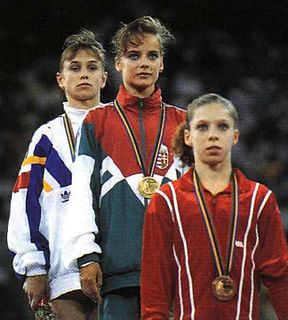 Henrietta Ónodi is a Hungarian artistic gymnast. She competed at the 1992 and 1996 Olympics and won a gold and a silver medal in 1992. After retiring from gymnastics in 1997 she moved to the United States, married American Olympic pentathlete Jimbo Haley, and became a naturalized U.S. citizen. In 2010, she was inducted into the International Gymnastics Hall of Fame.

Abie Grossfeld is an [America] former gymnast and current gymnastics coach. Grossfeld has represented the United States as a gymnastics competitor or coach in seven Olympic Games, seven World Championships, six Maccabiah Games, and five Pan American Games — in addition to many other major gymnastics events.

Diane Simpson is an American athlete, an Olympian and an eight-time Rhythmic gymnastics national team member, and was inducted into the USA Gymnastics Hall of Fame, Class of 2004. She writes, produces and manages talent and events for clients and sponsors.

István Sárkány was a Hungarian Olympic gymnast, Olympic judge, gymnastics coach and official. Sárkány represented Hungary at the 1936 Berlin Summer Olympics at the age of 22. He participated in all men's gymnastic events with highs of 29th in the Rings and 31st in the Vault competitions. He placed 64th in the Men's All-around competition.

Valerie Le Zimring-Schneiderman is a former Olympic rhythmic gymnast. She represented the United States at the 1984 Summer Olympics, and finished 11th in the individual all-around.