Regional airlines are airlines that operate regional aircraft to provide passenger air service to communities without sufficient demand to attract mainline service. There are two main ways for a regional airline to do business:

Málaga is a municipality, capital of the Province of Málaga, in the Autonomous Community of Andalusia, Spain. With a population of 571,026 in 2018, it is the second-most populous city of Andalusia and the sixth-largest in Spain. The southernmost large city in Europe, it lies on the Costa del Sol of the Mediterranean, about 100 kilometres east of the Strait of Gibraltar and about 130 km (80.78 mi) north of Africa.

On February 27, 2009 the airline started its first passenger flights. Its founders were executives of the airline Air Madrid, which ceased operation in December 2006. Initially, its fleet comprises an Embraer 145, but this was expected to increase to offer B767 flights to the Caribbean and Latin America, but this never happened.

On April 29 it commenced flights on the Gibraltar to Madrid route previously abandoned by GB Airways and Iberia. [1] Daily weekday flights to Madrid with an additional Sunday night service were operating. Thrice weekly flights to Barcelona has commenced from the start of July 2009. The routes would be flown by Embraer 145. This is the first time that Gibraltar airport has had flights to both Madrid and Barcelona.

On 13 August 2010, the airline ceased operations because the local aviation authorities withdrew their licence.

European Air Express was a regional airline based in Mönchengladbach, Germany.

The Ándalus Líneas Aéreas fleet consisted of the following aircraft as of 8 July 2010: [2]

Gibraltar has a limited public transport system, due to the compact size of the territory.

Líneas Aéreas Privadas Argentinas, more commonly known by the acronym LAPA, was an airline based in Buenos Aires, Argentina. At its heyday, the carrier operated international services to the United States and Uruguay, as well as an extensive domestic network within Argentina. Additionally, the company also operated charter services. Domestic and regional flights were operated from downtown's Aeroparque Jorge Newbery, whereas an international service to Atlanta was operated from Ministro Pistarini International Airport. LAPA was the first carrier to break a monopolistic market controlled by Aerolíneas Argentinas and its sister company Austral Líneas Aéreas, offering competitive prices. It ceased operations in April 2003.

Ibertrans Aérea is an airline based in Madrid, Spain. It was established in 1991 and operates passenger and cargo services, including charters and wet leases for other airlines. Its main base is Madrid Barajas International Airport. 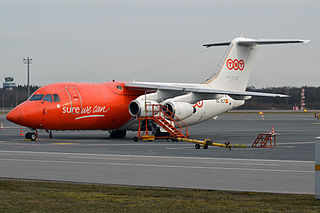 TAF Linhas Aéreas was an airline based in Fortaleza, Brazil. It operated regional passenger and cargo services. Today, the owner continues to do Services with a TAF Taxi Aéreo or Taf Air Taxi, using some Cessna 208 Caravan to sporadic flights in interior of Northeast of Brazil. 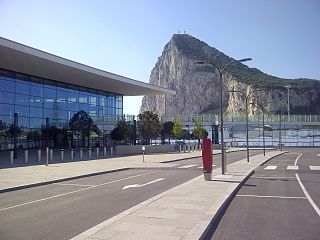 Gibraltar International Airport or North Front Airport is the civilian airport that serves the British overseas territory of Gibraltar. The runway is owned by the Ministry of Defence for use by the Royal Air Force as RAF Gibraltar. Civilian operators use the civilian-operated terminal. National Air Traffic Services hold the contract for provision of air navigation services at the airport.

Clickair was a low-cost airline that was based in the Parc de Negocis Mas Blau in El Prat de Llobregat, near Barcelona, Spain. Clickair flew to nearly 40 destinations in Europe. The airline's main base was Barcelona–El Prat Airport with further bases at Málaga, Seville and Valencia. Clickair merged into Vueling on 15 July 2009.

Flybmi, styled as flybmi, legally British Midland Regional Limited and formerly branded as BMI Regional, was a British regional airline that operated scheduled passenger services across the UK and Europe. The head office of the airline was at East Midlands Airport in North West Leicestershire, and it had operating bases at Aberdeen, Brussels, Bristol, East Midlands, Newcastle and Munich.

Helitt Líneas Aéreas was a Spanish charter airline based in Málaga with its main base at Málaga Airport. 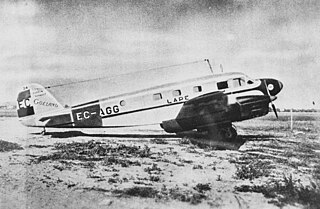