Åtvidabergs Fotbollförening, also known simply as Åtvidabergs FF, Åtvidaberg, Åtvid or (especially locally) ÅFF, is a Swedish professional football club based in Åtvidaberg. The club is affiliated with Östergötlands Fotbollförbund and plays their home games at Kopparvallen. [1] The club colours, reflected in their crest and kit, are blue and white. Formed on 1 July 1907 as Åtvidabergs IF, the club was most successful during the 1970s when they won two national championship titles and two national cup titles. [2] With a population of around 7,000, Åtvidaberg is the smallest town ever to bring home a Swedish league title. They currently play in Division 2, where the season lasts from April to November.

Initial rise through the divisions

During the 1920s, the small town club Åtvidabergs IF played in the fifth tier of Swedish football. However, local businessman Elof Ericsson was determined to change this. He became chairman of the board and took the initiative of separating the different sections of the multisport club, thus forming a new club, Åtvidabergs FF, out of the football section. Through his company Facit, which employed a large portion of the small Åtvidaberg population, he was also able to increase the funding for the team.

Åtvidaberg became early forerunners with their strategy to scout players nationally instead of just locally. Since all players in Sweden at the time were amateurs, their ability to offer new signings a good job at the Facit factory made them an attractive club to play for. This, together with the hiring of foreign coaches like Kálmán Konrád, helped the club move up through the divisions, establishing them in the second tier and playing one year in Allsvenskan. [3]

The peak of Åtvidaberg's success

The years that followed would prove to be Åtvidabergs FF's most successful ever. During this period, they recruited players like Ralf Edström, Roland Sandberg and Conny Torstensson.

In 1967, they were promoted to Allsvenskan and five years later they won the league for the first time ever and repeated the year after in 1973. Ironically, this golden age came at exactly the same time as the Facit company, which had enabled the success, struggled greatly and eventually was sold off to Electrolux. [3]

After struggling greatly in the 1990s and falling as low as the fourth tier with attendance numbers in the hundreds, [4] Åtvidaberg had managed to climb back up to the second tier again by the start of the new millennium. In an effort to further strengthen their organization and finances, the club started a cooperation with reigning champions Djurgårdens IF in 2003. [5] The deal also included a loan of several Djurgården players to Åtvidaberg. In 2005, the Djurgården chairman said that the team should move to the nearby city of Linköping, that did not have a club in the higher divisions. The proposal was met by a negative reaction from the Åtvidaberg supporters. The cooperation finally collapsed in 2006 when Åtvidaberg Municipality refused to cover any potential economic losses for Djurgården. [6]

In the following years, Åtvidaberg finished in the top half of the Superettan table and finally in 2009 they were promoted back to Allsvenskan for the first time since 1982. They were relegated again but bounced back immediately and achieved an eighth-place finish in the 2012 Allsvenskan. During the upcoming seasons, Åtvidaberg finished mid-table in the top tier with the help of the three key players that long had stayed faithful with the club: goalkeeper Henrik Gustavsson (that made 487 league appearances between 1997 and 2015), central defender Daniel Hallingström (350 appearances and 29 goals between 1999–2000 and 2002–2015) and midfielder Kristian Bergström (489 appearances and 118 goals between 1992–1997 and 2004–2015). All three players retired after the 2015 season, as Åtvidaberg finished 16th and last in Allsvenskan and got relegated back to Superettan.

Two years later, in 2017, the club got relegated from Superettan to the third tier, Division 1.

Idrottsklubben Sleipner is a sports club in Norrköping, Sweden; the main sports are football and ten-pin bowling. It was founded in 1903, and named after the deity Odin's horse Sleipnir from Norse mythology. Currently, the club's senior men's team plays football in Division 2. They are mostly known for winning Allsvenskan in 1938, but have since been overshadowed by local rivals IFK Norrköping both locally and nationally. The club is affiliated to the Östergötlands Fotbollförbund. In the early 20th Century, the club also played bandy. also the record holders of most goalscorers in one game against Cuba in 1938 with 7 goals.

Ängelholms FF is a football club based in Ängelholm, Sweden. The club is affiliated to Skånes Fotbollförbund and play their home games at Ängelholms IP. The club was formed in 1976 as a merger between Ängelholms IF and Skörpinge GIF. The club plays in Division 1, the third highest tier of Swedish football.

The 2011 Allsvenskan, part of the 2011 Swedish football season, was the 87th season of Allsvenskan since its establishment in 1924. The preliminary 2011 fixtures were released on 15 December 2010. The season began on 2 April 2011 and ended on 23 October 2011. Malmö FF were the defending champions, having won their 16th Swedish championship and their 19th Allsvenskan title the previous season.

Haris Radetinac is a Serbian-born Bosniak footballer who plays Djurgårdens IF in Allsvenskan as a midfielder. 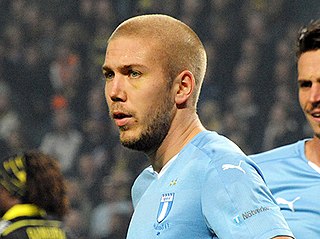 Anton Tinnerholm is a Swedish footballer who plays for New York City as a defender.