An École des Beaux-Arts (French pronunciation: ​ [ekɔl de boz‿aʁ] ; "School of Fine Arts") is one of a number of influential art schools in France. It is the cradle of Beaux-Arts style in architecture and city planning that thrived in France and the United States during the end of the nineteenth century and the first quarter of the twentieth century. [1] The most famous and oldest École des Beaux-Arts is the École nationale supérieure des Beaux-Arts, now located on the left bank in Paris, across the Seine from the Louvre, at 14 rue Bonaparte (in the 6th arrondissement). The school has a history spanning more than 350 years, training many of the great artists in Europe. Beaux Arts style was modeled on classical "antiquities", preserving these idealized forms and passing the style on to future generations. [2]

The origins of the Paris school go back to 1648 when the Académie des Beaux-Arts was founded by Cardinal Mazarin to educate the most talented students in drawing, painting, sculpture, engraving, architecture and other media. Louis XIV was known to select graduates from the school to decorate the royal apartments at Versailles, and in 1863 Napoleon III granted the school independence from the government, changing the name to "L'École des Beaux-Arts". Women were admitted beginning in 1897.

The curriculum was divided into the "Academy of Painting and Sculpture" and the "Academy of Architecture". Both programs focused on classical arts and architecture from Ancient Greek and Roman culture. All students were required to prove their skills with basic drawing tasks before advancing to figure drawing and painting. This culminated in a competition for the Grand Prix de Rome, awarding a full scholarship to study in Rome. The three trials to obtain the prize lasted for nearly three months. Many of the most famous artists in Europe were trained here, including Géricault, Degas, Delacroix, Fragonard, Ingres, Moreau, Renoir, Seurat, Cassandre, and Sisley. Rodin however, applied on three occasions but was refused entry. [3] Paul Cézanne applied twice but was turned down. [4] Bernard was suspended for stylistic "errors". [5]

The buildings of the school are largely the creation of French architect Félix Duban, who was commissioned for the main building in 1830. His work realigned the campus, and continued through 1861, completing an architectural program out towards the Quai Malaquais.

The Paris school is the namesake and founding location of the Beaux Arts architectural movement in the early twentieth century. Known for demanding classwork and setting the highest standards for education, the École attracted students from around the world—including the United States, where students returned to design buildings that would influence the history of architecture in America, including the Boston Public Library, 1888–1895 (McKim, Mead & White) and the New York Public Library, 1897–1911 (Carrère and Hastings). Architectural graduates, especially in France, are granted the title élève.

The architecture department was separated from the École after the May 1968 student strikes at the Sorbonne. The name was changed to École nationale supérieure des Beaux-Arts. Today, over 500 students make use of an extensive collection of classical art coupled with modern additions to the curriculum, including photography and hypermedia. [6]

Nancy is the prefecture of the northeastern French department of Meurthe-et-Moselle. It was the capital of the Duchy of Lorraine which was annexed by France under King Louis XV in 1766 and replaced by a province with Nancy maintained as capital. Following its rise to prominence in the Age of Enlightenment, it was nicknamed the "capital of Eastern France" in the late 19th century. The metropolitan area of Nancy had a population of 511,257 inhabitants at the 2018 census, making it the 16th-largest urban area in France and Lorraine's largest. The population of the city of Nancy proper is 104,885. 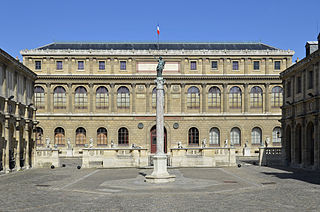 Léon Cogniet was a French history and portrait painter. He is probably best remembered as a teacher, with more than one hundred notable students.

The Société des Artistes Français is the association of French painters and sculptors established in 1881. Its annual exhibition is called the "Salon des artistes français". 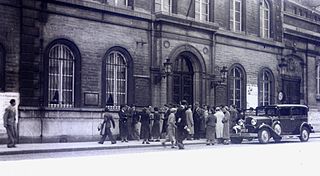 The Académie Royale des Beaux-Arts - École supérieure des Arts de la Ville de Bruxelles (ARBA-ESA), in Dutch Koninklijke Academie voor Schone Kunsten van Brussel, is the Belgian art school, established in Brussels in the Kingdom of Belgium. It was founded in 1711. At the beginning housed in a single room in the city hall, in 1876 the school moved to a former convent and orphanage in the Rue du Midi / Zuidstraat, rehabilitated by the architect Pierre-Victor Jamaer, where the school still operates. 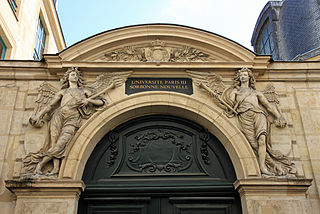 The École nationale supérieure des Arts Décoratifs is a public grande école of art and design of PSL Research University. The school is located in the Rue d'Ulm in Paris.

The École nationale supérieure des Beaux-Arts de Lyon is a school of art and design in Lyon, located in Les Subsistances, in the 1st arrondissement of Lyon, in the Rhône-Alpes region of France. It is part of the École des Beaux-Arts tradition, that established the Beaux-Arts architecture style. 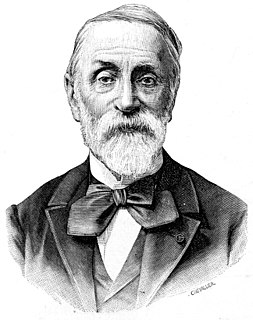 Jean-Nicholas Huyot was a French architect, best known for his 1833 continuation of work on the Arc de Triomphe from the plans of Jean Chalgrin. 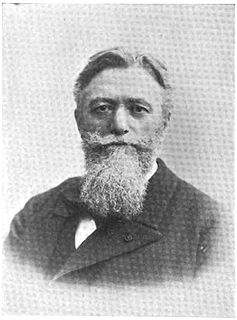 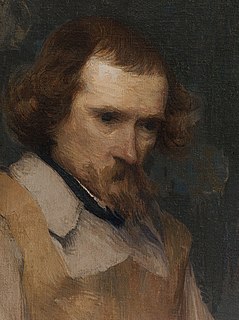 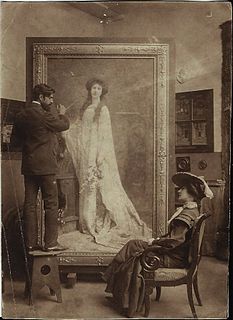 Louis Bernard Bonnier was a French architect known for his work as an urban planner for the city of Paris. He was instrumental in loosening the restrictions on the appearance of buildings in Paris, which resulted in the blossoming of Art Nouveau buildings. He designed many significant buildings himself, including private villas, public housing and railway buildings. In all his work he was true to the rationalist principles of Art Nouveau.

Auguste Allongé was a French painter, illustrator and engraver.

Louis-Théodore Devilly was a French painter who specialized in military and Orientalist scenes; associated with the École de Metz.