Born in Paris, Édouard de Rothschild was the only son of Baron Alphonse James de Rothschild (1827–1905). His mother was Leonora de Rothschild (1837–1911), the daughter of Lionel de Rothschild of the English branch of the family. [1] He was raised in a Paris mansion at 2 rue Saint-Florentin that is now home to the United States Embassy as well as at Château de Ferrières in the country.

Only a few months after Édouard's marriage, his father died and he formally took over the running of de Rothschild Frères bank. His grandfather and the French bank founder, James Mayer de Rothschild, had stipulated "that the three branches of the family descended from him always be represented." As such, Édouard would be joined by the sons of two different uncles: cousin Robert Philippe de Rothschild (1880–1946) and cousin Maurice de Rothschild (1881–1957). Édouard was cautious by nature and often old-fashioned in his ideas, an attitude which extended to his personal dress and office décor. Like his father, Édouard too was appointed a director of the Banque de France. In 1911, he negotiated a deal with Henri Deterding for his Royal Dutch Shell company to purchase the Rothschilds' Azerbaijan oil fields.

In 1937, the government of France nationalized the country's railways including a major Rothschild railway asset owned in partnership with the English branch of the family. They had owned the Chemin de Fer du Nord rail transport company for almost 100 years and had an interest in the Chemins de fer de Paris à Lyon et à la Méditerranée railway which Robert represented for the family on its board of directors.

Because of cousin Maurice's perceived flamboyant playboy image and his conduct in political and business activities, Édouard considered him to be something of a black sheep. They tolerated each other for the sake of the business but by the middle of the 1930s their differences reached a point where Édouard and cousin Robert decided to force Maurice out of de Rothschild Frères bank. After extensive and bitter negotiations, a buyout was reached through an arbitrator.

Édouard de Rothschild inherited a share of the Château Lafite Rothschild vineyard in Bordeaux plus he also came into a valuable art collection from his father which he expanded through a number of important purchases. His large collection included pieces by prominent sculptors such as Jean-Louis Lemoyne and paintings from Vigée-Lebrun, Rembrandt and The Astronomer by Vermeer, amongst others.

Like his father, Édouard de Rothschild invested in thoroughbred horse racing. [1] A horse enthusiast who also liked to ride, he was a good polo player and a member of a team that competed in Polo at the 1900 Summer Olympics.

He inherited Haras de Meautry, a thoroughbred horse breeding farm in Touques, Calvados about 130 miles north of Paris. His sister Béatrice married Maurice Ephrussi whose family owned an estate at the village of Reux about eight miles away. In 1868, Édouard acquired the property and the Château de Reux remains in family hands to this day.

Édouard de Rothschild kept a stable of thoroughbreds at the Chantilly Racecourse in Chantilly, Oise and raced horses at racecourses throughout France with great success. Among the major races his horses won were:

During the German occupation of France in World War II, the Nazis seized some of the best racehorses in the country, shipping more than six hundred of them to Germany for racing and/or breeding. Among the horses stolen was Édouard de Rothschild's champion Brantôme who was sent to the German National Stud. The horse was repatriated at the end of the war in 1945 and became a leading sire.

The rise to power of Adolf Hitler's National Socialist party in Germany and the subsequent Anschluss of Austria to Germany saw a wave of Jews, and others the Nazis labeled as "undesirables," seek refuge in France. Most of these people escaped with little more than a suitcase of clothes. In March 1939, Édouard's wife Germaine converted an old house near the Château de Ferrières into a hostel for some 150 of these displaced persons. However, with the onset of World War II and the subsequent German occupation of France in 1940, Édouard de Rothschild and his family themselves chose to flee the country. In 1939, Édouard's son Guy joined the French Army and his daughter Jacqueline escaped with her husband Gregor Piatigorsky to the United States. Before leaving, Édouard de Rothschild tried to hide as much of his valuable art collection as possible, on the grounds of the Haras de Meautry farm and at his Château de Reux. The Nazis confiscated his collection. [2]

With his wife and second daughter Bethsabée, he safely left France and they made their way to Lisbon, Portugal from where they were able to go by plane to New York City. With the Allied liberation of France in 1944, Édouard de Rothschild and his wife returned home, [1] where he died in Paris in 1949 at the age of eighty-one. His son Guy took over as head of the family bank.

On 1 March 1905, Edouard de Rothschild married Germaine Alice Halphen (1884–1975). [1] They had four children, but according to his daughter Jacqueline, neither parent paid much attention to them. [3] Their children were:

Baroness Bethsabée de Rothschild was a philanthropist, a patron of dance, and member of the Rothschild banking family.

Brantôme (1931–1952) was a French Thoroughbred racehorse and prominent sire. He was unbeaten at ages 2 and 3 and is ranked among the best French horses ever.

Haras de Meautry in Touques, Calvados, Normandy, France, is a thoroughbred horse breeding farm. It was acquired in the 19th century by horse-racing enthusiast Alphonse James de Rothschild (1827–1905) who passed it down to his offspring so that today it is in the hands of Édouard de Rothschild.

Jacqueline Piatigorsky was an American chess player, author, sculptor, philanthropist, and arts patron. She was a member of the Rothschild banking family of France. 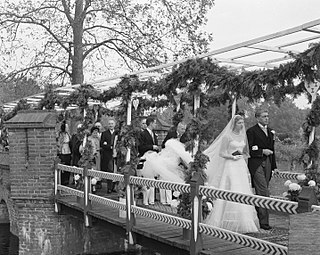 Marie-Hélène Naila Stephanie Josina de Rothschild was a French socialite who became a doyenne of Parisian high-society and was a member of the prominent Rothschild banking family of France.

The Prix du Prince d'Orange is a Group 3 flat horse race in France open to three-year-old thoroughbreds. It is run at Longchamp over a distance of 2,000 metres, and it is scheduled to take place each year in September. 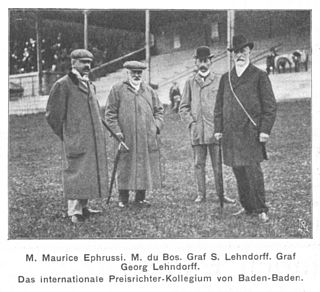 Maurice Ephrussi was a French banker and horsebreeder.

Vieux Manoir (1947–1981) was a French Thoroughbred racehorse and Champion sire.

La Farina (1911–1935) was a French Thoroughbred racehorse and sire who was noted for his rivalry with his contemporary Sardanapale and has been regarded as one of the best French horses of the 20th century. In 1913 he showed promise as a juvenile, winning the Prix La Rochette. In the following year he defeated Sardanapale in the Prix Daru and the Prix Lupin before being narrowly beaten by his rival in the Grand Prix de Paris. La Farina's racing career was curtailed by the outbreak of the First World War but he went on to become a successful sire of winners. He died in 1935.

Eclair au Chocolat was a French Thoroughbred racehorse and sire. As a three-year-old he won the Grand Prix de la Ville de Vichy and then established himself as one of the best of a strong generation of European horses with wins in the Prix Royal Oak and the Prix de l'Arc de Triomphe. After retiring to stud in 1939 he was taken to Germany during the Occupation of France. His final fate is unknown.

The Château de Reux is a castle in Reux, Calvados, Normandy, France.