In 2006 she directed her first feature, a post-porn and feminist pro-gender queer lesbian and transgender film, One Night Stand . [1]

In 2009 she assembled an ephemeral troupe of performers, consisting of Wendy Delorme, Judy Minx, DJ Metzgerei, Mad Kate, Sadie Lune and Madison Young, for a European tour during the shooting of her film Too Much Pussy! Feminist Sluts, A Queer X Show. This feminist sex-positive, documentary road movie came out in French cinemas in 2010. [2]

Her first monograph of photographs, 'Émilie Jouvet The Book', was published by Womart editions in 2014.

Annie M. Sprinkle is an American certified sexologist and advocate for sex work and healthcare. Sprinkle works as a sex educator, feminist stripper, pornographic actress, sex film producer and sex positive feminist, and she identifies as ecosexual. Her education includes a BFA in photography from the School of Visual Arts (1986) and, in 1996, she became the first porn star to get a doctorate degree (PhD), which she received in Human Sexuality from the Institute for Advanced Study of Human Sexuality in San Francisco (1996). Sprinkle is best known for her self-help style of pornographic content teaching individuals about pleasure and for her conventional pornographic film Deep Inside Annie Sprinkle (1981). Through the production of content Sprinkle has contributed to feminist pornography and the larger social movement of feminism; she is also known for contributing to the rise of the post-porn movement and lesbian pornography. Sprinkle is a member of the LGBTQ+ community, and she married her long-time partner, Beth Stephens, in Canada on January 14, 2007.

Queercore is a cultural/social movement that began in the mid-1980s as an offshoot of the punk subculture and a music genre that comes from punk rock. It is distinguished by its discontent with society in general, and specifically society's disapproval of the LGBT community. Queercore expresses itself in a DIY style through magazines, music, writing and film.

Carol Leigh, a.k.a.The Scarlot Harlot is an American artist, author, film maker, and sex workers' rights activist. She is credited with coining the term "sex worker" and currently chairs the Sex Worker Film and Arts Festival and is the director of BAYSWAN, the Bay Area Sex Worker Advocacy Network.

Manuela Kay is a German journalist, author and publisher.

FACE à FACE is a gay and lesbian film festival that is held annually in St Etienne, France, for four days in November. The mission of the festival is to promote positive attitudes towards homosexuality through art and culture. In the common cause of standing up against discrimination. The festival creates an open platform on LGBT and organizes events that highlights the best of Gay and Lesbian Cinema. Its first event was held from September 30 to October 2, 2005.

In&Out, originally called Rencontres Cinématographiques, is a queer film festival of Nice organized by the association Les Ouvreurs. The event takes place each year in April.

Judy Minx is a French pornographic actress. She identifies as a sex worker, queer and as a feminist activist. 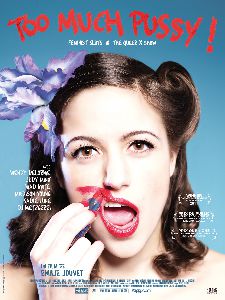 Antony Hickling is an English Independent film maker, actor and writer. He became a French citizen in 2018.

La Fête du Slip is an annual alternative-porn film festival held in Lausanne, Switzerland. It is Romandy's first and biggest multidisciplinary festival whose sole purpose is to focus on body, gender, and sexuality in art. It takes places during the first week-end of March since 2012.

The Paris Feminist and Lesbian Film Festival is a women-only film festival founded in Paris, France, in 1989. The festival is organized by Cineffable, an association dedicated to promoting lesbian cinema, and encouraging lesbian creativity.