Much of Senancour's childhood was spent in a state of ill-health. He began his education with a curé in the vicinity of Ermenonville before being sent to the Collège de la Marche. His father, Claude-Laurent Pivert, a Contrôleur des Rentes and Conseil du Roi, wanted him to enter the seminary of Saint-Sulpice to become a priest. To avoid a profession for which he had no vocation, Senancour, with the help of his mother, fled to Switzerland in 1789. On 11 September 1790, he married Marie-Françoise Daguet with whom he had two children: a daughter Eulalie (1791) who would later follow in her father's footsteps and become a writer, and a son, Florian-Julien (1793), who went on to pursue a career in the military.[ citation needed ] The marriage was not a happy one; his wife refused to accompany him to the Alpine solitude he desired, and they settled in Fribourg. [1]

His absence from France at the outbreak of the Revolution was interpreted as hostility to the new government, and his name was included in the list of émigrés. He visited France from time to time by stealth, but he only succeeded in saving the remnants of a considerable fortune. In 1799 he published in Paris his Rêveries sur la nature primitive de l'homme , a book containing impassioned descriptive passages which mark him out as a precursor of the romantic movement. His parents and his wife died before the close of the century, and Senancour was in Paris in 1801 when he began Obermann, which was finished in Switzerland two years later, and printed in 1804. This singular book, which has never lost its popularity with a limited class of readers, was followed in the next year by a treatise De l'amour , in which he attacked the accepted social conventions. [1] During this period, he worked at the magazine Mercure de France where he made the acquaintance of Louis-Sébastien Mercier and Charles Nodier.

Senancour might have spent his life writing in complete obscurity were it not for a charge leveled against him by a public prosecutor for slandering religion in the second edition of his Résumé de l'histoire des traditions morales et religieuses (1827) wherein he described Jesus as a "youthful sage." He was initially found guilty and sentenced to nine months in prison and fined 300 francs, but the penalties were dropped on appeal. Attention to the case from the liberal press increased Senancour's standing, and many of his works were rediscovered and republished. The author revised and expanded Obermann for the 1833 edition.

Obermann, which is to a great extent inspired by Rousseau, was edited and praised successively by Sainte-Beuve and by George Sand, and had a considerable influence both in France and England. It is a series of letters supposed to be written by a solitary and melancholy person, whose headquarters are placed in a lonely valley of the Jura. The idiosyncrasy of the book in the large class of Wertherian-Byronic literature consists in the fact that the hero, instead of feeling the vanity of things, recognizes his own inability to be and do what he wishes. Danish literary critic Georg Brandes has pointed out that while Chateaubriand's novella René was appreciated by some of the ruling spirits of the century, Obermann was understood only by the highly gifted, sensitive temperaments, usually strangers to success. [1]

Senancour was tinged to some extent with the older philosophe form of free-thinking, and had no sympathy with the Catholic reaction. Having no resources but his pen, Senancour was driven to hack-work during the period which elapsed between his return to France (1803) and his death at Saint-Cloud; but some of the charm of Obermann is to be found in the Libres Méditations d'un solitaire inconnu . Thiers and Villemain successively obtained for Senancour from Louis Philippe pensions which enabled him to pass his last days in comfort. Senancour also authored the comedic drama Valombré (1807), and late in life wrote a second novel in letters entitled Isabelle (1833). He composed his own epitaph, "Eternité, sois mon asile". [1]

Senancour is immortalized for English readers in two poems by Matthew Arnold entitled Stanzas in Memory of the Author of Obermann and Obermann Once More.

Between 1848 and 1854, Franz Liszt composed Vallée d'Obermann, one of the pieces for piano of the suite Première année: Suisse, from the œuvre Années de pèlerinage , inspired by Senancour's most famous novel.

François-René, vicomte de Chateaubriand (1768–1848) was a French writer, politician, diplomat and historian who founded Romanticism in French literature. Descended from an old aristocratic family from Brittany, Chateaubriand was a royalist by political disposition. In an age when a number of intellectuals turned against the Church, he authored the Génie du christianisme in defense of the Catholic faith. His works include the autobiography Mémoires d'Outre-Tombe, published posthumously in 1849–1850. 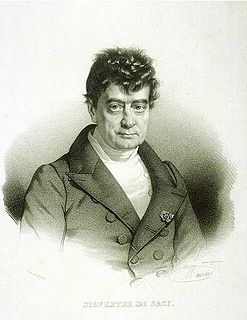 Alexandre Rodolphe Vinet, was a Swiss critic and theologian. 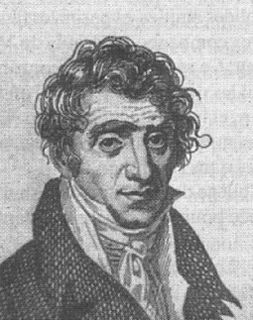 Joseph François Michaud was a French historian and publicist.

Jean-Baptiste Geneviève Marcellin Bory de Saint-Vincent was a French naturalist, officer and politician. He was born on July 6, 1778 in Agen (Lot-et-Garonne) and died on December 22, 1846 in Paris. Biologist and geographer, he was particularly interested in volcanology, systematics and botany. The standard author abbreviation Bory is used to indicate this person as the author when citing a botanical name.

Louis Claude de Saint-Martin was a French philosopher, known as le philosophe inconnu, the name under which his works were published; he was an influential of the mystic and human mind evolution and became the inspiration for the founding of the Martinist Order. 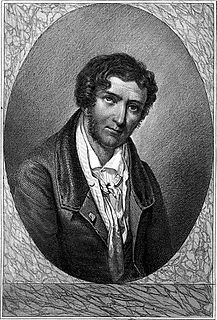 Henri Brémond was a French literary scholar, sometime Jesuit, and Catholic philosopher, one of the theological modernists.

Alexandre-Étienne Choron was a French musicologist. For a short time he directed the Paris Opera. He made a distinction between sacred and secular music and was one of the originators of French interest in musicology.

Virginie Pivert de Senancour (1791–1876), the daughter of essayist Étienne Pivert de Senancour, was a French novelist and journalist. She served as her father's secretary and also wrote stories for children. Her work La Conquêtomanie is a satire against Napoleon. In Réplique à un mal avisé she responds to certain attacks levelled against her father by Eugène de Mirecourt. Nearly all the biographical information that exists about her father originates from her. One such biographical episode involves the novelist George Sand, who was influenced by Obermann. Eulalie writes that Sand, who tended to be tongue-tied with people she didn't know, sat facing the 63-year-old Senancour for 10 minutes without uttering a word before getting up and silently leaving the room. 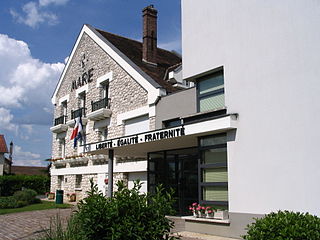 Samoreau is a commune in the Seine-et-Marne department in the Île-de-France region in north-central France.

Joseph Hajjar, a Melkite Catholic priest of Syrian origin, is particularly known for historical works covering the fortunes of Christians in the Levant concentrating on the nineteenth century. Hajjar's interests cover wider spheres however including the permanent synod in the patriarchate of Constantinople down to the eleventh century, church history in modern times also involving the European territories of the Ottoman Empire and the question of Christian ecclesiastical tribunals in the Muslim world including their suppression in Egypt.

René Basset was a French orientalist, specialist of Arabic and Berber languages.