Stade Rennais Football Club, commonly referred to as Stade Rennais FC, Stade Rennais, Rennes, or simply SRFC, is a French professional association football club based in Rennes in Brittany. They compete in Ligue 1, the top tier of Football in France, the club plays its home matches at the Roazhon Park, located within the city. The team is managed by Julien Stéphan. The team's president is Jacques Delanoë (interim) and its owner is Artémis, the holding company of businessman François Pinault.

Stade Malherbe Caen is a French professional football team, playing in the city of Caen in Normandy. The club was founded on 17 November 1913 by the merger of Club Malherbe Caennais and Club Sportif Caennais. The team takes its name from François de Malherbe, a 17th century poet from Caen.

Red Star Football Club, also known simply as Red Star, is a French association football club founded in Paris in 1897, and is the second oldest French football club, after Le Havre AC. In the 2019–20 season the club plays in the Championnat National, the French third tier, after being relegated from Ligue 2 at the end of the 2018–19 season. It plays matches at Stade Bauer now it is back in the third tier. The team is managed by Vincent Bordot and is currently captained by Formose Mendy.

Football Club Lorient-Bretagne Sud is a French association football club based in Lorient, Brittany. The club was founded in 1926 and will play in Ligue 1 in the 2020–21 season after promotion from Ligue 2 in the 2019–20 season. Lorient plays its home matches at the Stade Yves Allainmat, named after the former mayor of Lorient. The stadium is surnamed Stade du Moustoir because of its location within the city. The team is managed by Christophe Pélissier.

Union Sportive Créteil-Lusitanos is a French football club based in Créteil, a southeastern suburb of Paris. The club was founded in 1936 and currently play in the Championnat National 2, the fourth division of French football. The football club forms part of an omnisports club that is also known for its handball team.

Amiens Sporting Club is a French association football club based in the northern city of Amiens in the Hauts-de-France region. The club was formed in 1901 and play in Ligue 2, the second division of French football. The club plays its home matches at the Stade de la Licorne located within the city. The 2017–18 Ligue 1 season was the first in the club's 116-year history, where they finished in 13th place to secure a position in Ligue 1 for the following year. Amiens have never won a major trophy.

Football Club de Rouen 1899 is a French association football club based in Rouen. The club was formed in 1899 and currently plays in Championnat National 2, the fourth level of French football. Rouen played its home matches at the Stade Robert Diochon; named after Robert Diochon, a historic player who was influential during the club's infancy. The team is managed by former football player Éric Garcin and captained by defender Pierre Vignaud. Rouen is known as Les Diables Rouges and have been since 1903.

Athlétic Club Arles-Avignon was a French association football club originally based in Arles. The club was founded in 1912 as a result of a merger and was formerly known as Athlétic Club Arles, but in 2010, moved to the nearby commune of Avignon and adopted its current name. Arles-Avignon last played in the Championnat de France Amateur, the fourth division in French football; it previously gained four promotions in five seasons to reach Ligue 1 in 2010.

Guy David was a French football player and coach.

The 2009–10 Championnat de France Amateurs season was the 12th edition of the competition since its establishment. The competition officially began on 8 August 2009 and ended in May 2010. The competition consisted of 73 clubs spread into 4 parallel groups of 18 with one of the groups containing 19 clubs. It is open to reserve teams in France and amateur clubs in France, although only the amateur clubs are eligible for promotion to the Championnat National. The highest-placed amateur team in each pool are promoted, replaced by the 4 lowest-placed in the Championnat.

Anatole Cédric Roméo Ngamukol is a footballer who plays as a forward for Étoile Fréjus Saint-Raphaël in the Championnat National 2. Born in France, he is a youth international for Equatorial Guinea.

Football Club Chambly Oise is a French football club based in Chambly in the Hauts-de-France region. Their home stadium is Stade des Marais in the town, but due to regulations they are playing their Ligue 2 matches in the 2019–20 season elsewhere. 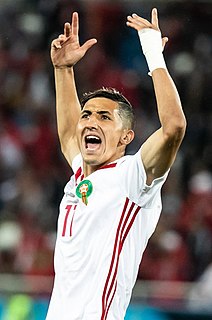 Fayçal Fajr is a French-born Moroccan professional footballer who plays as an attacking midfielder for La Liga club Getafe.

The 2016–17 Coupe de France was the 100th season of the most prestigious football cup competition of France. The competition was organised by the French Football Federation (FFF) and was opened to all clubs in French football, as well as clubs from the overseas departments and territories.

US Tourcoing Football Club is a French football club founded in 1902 and based in Tourcoing. The club played in the Championnat National 3 for five seasons since 2014–2015 after finishing first in the Division Honneur of Nord-Pas-de-Calais during the 2013–2014 season, but were relegated back to the sixth level in 2019.