Last updated May 07, 2021
This article is about the town. "Ísafjörður" may also refer to the innermost fjord of Ísafjarðardjúp.
Town in Northwest Constituency, Iceland

Ísafjörður (pronounced [ˈiːsaˌfjœrðʏr̥] , meaning ice fjord or fjord of ice, ice in plural genitive) is a town in the northwest of Iceland.

The oldest part of Ísafjörður with the town centre is located on a spit of sand, or eyri, in Skutulsfjörður, a fjord which meets the waters of the larger fjord Ísafjarðardjúp. With a population of about 2,600, Ísafjörður is the largest settlement in the peninsula of Vestfirðir (Westfjords) and the administration centre of the Ísafjarðarbær municipality, which includes – besides Ísafjörður – the nearby villages of Hnífsdalur, Flateyri, Suðureyri, and Þingeyri.

According to the Landnámabók (the book of settlement), Skutulsfjördur was first settled by Helgi Magri Hrólfsson in the 9th century. In the 16th century, the town grew as it became a trading post for foreign merchants. Witch trials were common around the same time throughout the Westfjords, and many people were banished to the nearby peninsula of Hornstrandir, now a national nature reserve. The town of Ísafjörður was granted municipal status in 1786.

As the rest of Iceland, Ísafjörður experiences high winds and very few clear days throughout all the year.

The town is connected by road and a 5.4 kilometres (3.4 miles) road tunnel to Bolungarvík which lies 15 km (9 mi) to the northwest, and to the village of Súðavík to the east. The partly one-lane Vestfjarðagöng (Vestfirðir Tunnel), completed in 1996, leads to the towns of Flateyri and Suðureyri, and to the western parts of the Westfjords. Ísafjörður has an airport with regular flights to Reykjavík.

Fishing has been the main industry in Ísafjörður, and the town has one of the largest fisheries in Iceland. A severe decline in the fishing industry for a variety of reasons, such as fishing restrictions in the early 1980s, and a decline in the fish population, has led the inhabitants to seek work elsewhere, leading to a decline in the town's population. The harbor also serves ferries to nearby settlements as well as larger cruise ships for tourists visiting the area. The tourist industry is growing; it is a major access point to the nature reserve on the Hornstrandir Peninsula, an uninhabited wilderness area to which ferries run weekly during summer.

Despite its size, small population, and historical isolation from the rest of the country, the town has a relatively urban atmosphere. Ísafjörður has a school of music, as well as a hospital. The older former hospital building now accommodates a cultural center with a library and showrooms. Recently, the small town has become known in the country as a center for alternative music outside of Iceland. A yearly festival, Aldrei fór ég suður, provides a platform for local musicians and bands from around Iceland and even from overseas. A university center, Háskólasetur Vestfjarða, which acts as a distance learning center for the 7000 residents of the Westfjords, was established in March 2005.

The only gymnasium located in the Westfjords, Menntaskólinn á Ísafirði, is in Ísafjörður. The students range from 16 to 20 years of age, as is traditional in Icelandic gymnasium.

Major employers in the region include Arctic Fish, Hraðfrystihúsið-Gunnvör, [6] 3X technology, Klofningur, and Íslandssaga. Ísafjörður is also the base of several noteworthy start-up companies including Fossadalur and Kerecis.

The town hosts varied and widely popular events, in the realms of both culture and outdoor recreation. These events include, but are not limited to:

In 2002, Ísafjörður's own Mugison (a.k.a. Örn Elías Guðmundsson) and his father organized the first Aldrei fór ég suður Music Festival as a free concert to support the burgeoning music community in Ísafjörður. The event has been established as an annual festival in mid April. The name Aldrei fór ég suður (I never went south) is taken from a Bubbi Morthens song of the same name, and may refer to a movement among young Icelanders to establish cultural events outside Reykjavík, and draw attention back to the nation's roots in the countryside. The festival's subtitle is "rokkhátið alþýðunnar" or "rock festival for the people."

From 2001 through 2014, the Við Djúpið Music Festival offered master classes and concerts with nationwide and worldwide known artists, such as Erling Blöndal Bengtsson, cellist and Vovka Ashkenazy, pianist as well as the Pacifica Quartet, Evan Ziporyn, clarinetist, composer, and a member of the band Bang on a Can gave a master class and concert in Ísafjörður during Við Djúpið 2007 and among performers at the 2008 festival where Pekka Kuusisto, violinist with Simon Crawford-Phillips, pianist and Håkon Austbø, pianist.

Ísafjörður is the home of Íþróttafélagið Vestri and Knattspyrnufélagið Hörður multi-sports clubs. Vestri fields departments in basketball, football, volleyball and bicycling. Its men's and women's basketball teams have played in the top-tier basketball leagues in the country while its men's volleyball team was promoted to the top-tier division in 2019. [7]

Knattspyrnufélagið Hörður was originally a football club but has fielded other departments, most prominently in handball, track & field, skiing and Icelandic wrestling. [8] [9] [10]

Ásatrúarfélagið is an Icelandic religious organisation of heathenry. It was founded on the First Day of Summer 1972, and granted recognition as a registered religious organization in 1973, allowing it to conduct legally binding ceremonies and collect a share of the church tax. The Allsherjargoði is the chief religious official.

Mugison is an Icelandic musician.

Maus is a rock band from Iceland, formed in 1993. The band consists of Birgir Örn "Biggi" Steinarsson on vocals and guitar, Daníel "Danni" Þorsteinsson on drums, Eggert Gíslason on bass, and Páll Ragnar "Palli" Pálsson on guitar. Most of their songs are sung in Icelandic, though English versions of some songs have been released, as well as some original songs in English. The band was active releasewise from 1994 to 2004 but still continue to play live. They released five studio albums, a number of singles and a compilation that also featured one new song and an bonus cd featuring unreleased demo's and remixes. The band was very active with live performances in and outside their native country. Abroad their most noticeable gigs where at the CMJ, Summerstage and touring Denmark. While active the band appeared at every Iceland Airwaves music festival including the first one. They were a popular supporting band for foreign bands who would visit Iceland. Those included bands/artists as Coldplay, Blonde Redhead, Ash, Ian Brown, Keane, Modest Mouse, and Placebo. Furthermore, Roger O'Donnell from The Cure has appeared as a guest keyboardist on their album Lof mér að falla að þínu eyra. 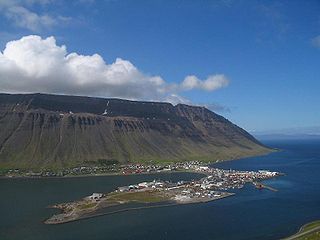 Við Djúpið was an annual music festival and a series of summer courses held in the Westfjords of Iceland around summer solstice. The event offered a series of concerts and master classes.

The Keflavík men's basketball team, commonly known as Keflavík, is the men's professional basketball department of Keflavík ÍF, based in the town of Reykjanesbær in Iceland. They currently play in Úrvalsdeild karla.

Ungmennafélag Bolungarvíkur, also known as simply UMFB or Bolungarvík, is a multi-sport club based in Bolungarvík, Iceland. It was founded on 1 April 1907 and its first chairman was Jóhann Jónsson. During its history it has had departments in basketball, chess, Esports, football, skiing and swimming amongst others.

Íþróttarhúsið á Torfnesi, known colloquially as Jakinn[ˈjaːcɪn̥n̥] or Ísjakinn[ˈiːsˌjaːcɪn̥n̥], is a multi-purpose indoor arena in Ísafjörður, Iceland. It is the homecourt to Íþróttafélagið Vestri and Knattspyrnufélagið Hörður but also hosts several other events every year.

Ungmennafélag Álftaness, also known as Álftanes, is a multi-sports club in Álftanes, Iceland. It has active departments in basketball, football, golf, track and field and volleyball.

The 4th Edda Awards were held on 10 November 2002 in the National Theater of Iceland in Reykjavik. The awards were hosted by TV presenters Valgerður Matthíasdóttir and the previous year's Best Television Personality Logi Bergmann Eiðsson. 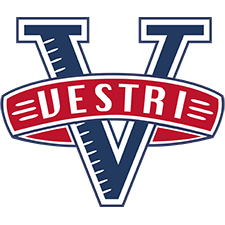 Knattspyrnudeild Vestra, also known as Vestri, is the football department of the Íþróttafélagið Vestri multi-sport club and is based in Ísafjarðarbær, Iceland.

The following is a list of notable events and releases of the year 2017 in Icelandic music.

Aldrei fór ég suður is an annual music festival held in Ísafjörður, Iceland, every Easter weekend since 2004. It is the brainchild of Mugison and his father, Guðmundur Kristjánsson, who came up with the idea after playing on a music festival in London in 2003, and is named after Bubbi Morthens song of the same name. Since its establishment, there has never been an entry fee to the festival and the bands do not get paid.

Einar Valur Kristjánsson was an Icelandic alpine skier. He competed in two events at the 1956 Winter Olympics. He also played football for ÍBÍ and Víkingur Reykjavík.

Knattspyrnufélagið Hörður, commonly known as Hörður or Hörður Ísafjörður, is an Icelandic multi-sport club from the town of Ísafjörður. It was founded in 1919 as a football club but since 1933 it has fielded other departments, most prominently in handball, track & field, skiing and Icelandic wrestling.

The 1995 Súðavík avalanche was an avalanche that struck the small fishing village of Súðavík in Iceland’s Westfjords on 16 January 1995, killing 14 people, including eight children, and injuring twelve. The disaster, along with the avalanche that killed 20 in Flateyri later in the year, had a profound effect on the nation and sparked a massive buildup of avalanche dams to protect towns in danger zones.

Magni Fannberg Magnússon is an Icelandic football coach. He is currently the Development manager of AIK.