Øravík (also spelled Ørðavík, Danish : Ørdevig) is a village on the east coast of the island of Suðuroy in the Faroe Islands. 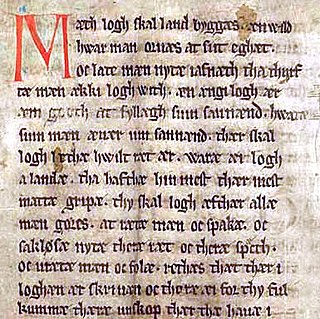 The Faroe Islands, or the Faeroe Islands—a North Atlantic archipelago located 200 miles (320 km) north-northwest of the United Kingdom and about halfway between Norway and Iceland—are an autonomous country of the Kingdom of Denmark. Total area is about 1,400 square kilometres (540 sq mi) with a population of 50,322 in October 2017.

The village is located in the center of the island on a crossroad where the road to Fámjin goes towards west over the mountains to the west coast. One part of the village is located in the bay of Øravík, the other part is 3 km further north near the ferry port Krambatangi. The northern part of Øravík and the southern part of Trongisvágur have grown together. Øravík is one of the few places in Suðuroy which still has cattle. Besides from that there are other domestic animals like sheep and geese. There is a small harbour in Øravík and some boat houses. 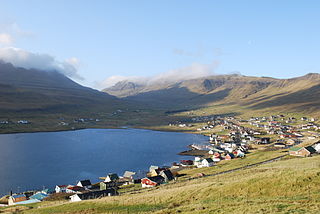 Just south of Øravík up in the mountains is a place called Mannaskarð, where the old walking paths from five villages meet, these paths are called varðagøtur in Faroese, named after "varðar", which means cairn. These are all around the island between the villages and other places, so people could find their way in the old days, before the roads for cars were made. On Mannaskarð the paths from Øravík, Fámjin, Hov, Porkeri and Vágur meet. Sometimes hiking trips are arranged along these old paths. [1]

Porkeri is a village in the Faroe Islands, situated northeast of Vágur on Suðuroy's east coast.

Vágur meaning Bay is a town on the island of Suðuroy, part of the Faroe Islands

Øravík is mentioned in Suduroy Saga (Suðuroyar Sagnir) several times, i.e. in the story about Vísa Marjun (Wise Marion). One of the stories about her tell about how she scared away the pirates who ravaged at that time. They embarked in Hvalba and wanted to go to all of the island to steal what they could find. People escaped up in the mountains to hide in caves there, but Wise Marion was not scared, she stood and waited for them and sent a retarded boy towards them. According to the story the pirates got scared that she may put a spell on them, so they turned around and went back to Hvalba. [2] The pirates were called Turks, but they came from Algier in North Africa, which was a part of the Ottoman Empire. [3]

The road and the tunnel between Øravík and Hov

In 1943 work started to make a road between Øravík and Hov. However, very little progress was made as only a few men were working on the road. They made the road from Øravík to Trøllavík (near Tjaldavík), but stopped in 1953. The work had also started on the other side of the mountains, in Hov, but there too they made little progress, and when the work there also stopped in 1953 they had only made it a short way from the village. Three years later they started to work again on both sides of the Øravík-Hov road. This time they were around 70 men on the northern side and around 60 men on the southern side. On 1 October 1958 the road was finally opened. [4]

49 years after the opening of the road between Øravík and Hov, which was a very big progress back then, a tunnel was opened between the same two villages. The tunnel, Hovstunnilin, was opened on 20 October 2007. [5] [6] 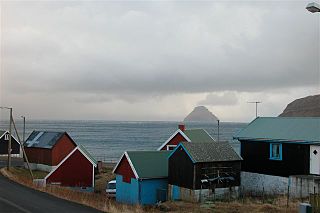 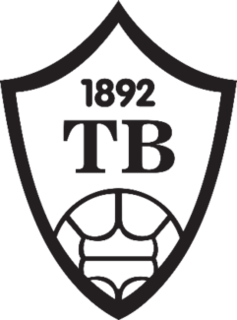 Gluggarnir is a mountain in the Faroe Islands. At 610 metres, it is the highest mountain on the southernmost island, Suðuroy. The mountain is located between the villages of Fámjin and Trongisvágur.

Royn Hvalba or Bóltfelagið Royn or just Royn is a Faroese football and sports association from Hvalba in Suðuroy, founded 23 October 1923. Chairman for Royn Hvalba is Gunnhild Mortensen. Manager is Eyðun Gullok Svalbard. Royn has a team in the Faroese second division. Royn also has teams for girls and boys, in 2012 they had a team for girls under 12, a team for boys U8 and one for boys U10. Royn and TB Tvøroyri now have a new manager for all the youth teams of the two clubs. Men over 35 have their own team. The women had their own team earlier. Royn is one of three football associations in the island Suðuroy. The other two football clubs are FC Suðuroy with base in Vágur and TB Tvøroyri from Tvøroyri. Royn Hvalba plays its home matches on the football field in Hvalba, which is a grass field. 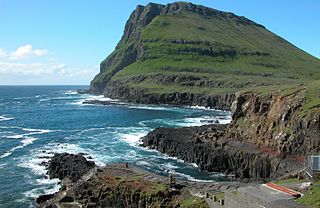 Hvalbiareiði is also called Fiskieiði, it is located on the west coast of Suðuroy, west of the village Hvalba. 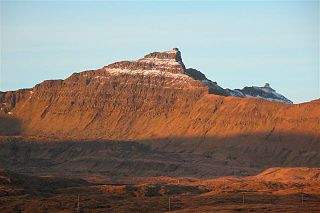 TB/FC Suðuroy/Royn is a Faroese football club based in Trongisvágur. The team is a result of a merger between all three clubs from the island of Suðuroy, which has a population of 4,600. The clubs are Tvøroyrar Bóltfelag, FC Suðuroy and Royn Hvalba. Initially the merger will be only for the men's teams in 2017. If all goes well, the merger will be completed for all teams from 2018. The agreement about the merger was so late that there was not enough time to find a new name and identity for the club, so the name is a combination of all three names of the clubs: TB/FC Suðuroy/Royn for TB Tvøroyri, FC Suðuroy and Royn Hvalba. The name is too long to use, so the media started to use the word Suðuroyarliðið instead, which means The team from Suðuroy and the supporters and the chairmen have agreed upon using the word Suðringar, which means People of Suðuroy.