Ľubiša (Rusyn : Любіша, Hungarian : Szerelmes) is a village and municipality in Humenné District in the Prešov Region of north-east Slovakia.

In historical records [ which? ] the village was first mentioned in 1410.[ citation needed ] 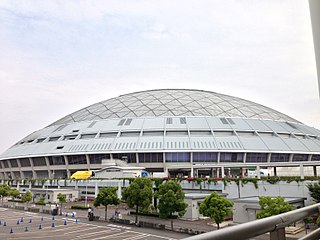 The Nagoya Dome (ナゴヤドーム), known as Vantelin Dome Nagoya for sponsoring reasons, is a baseball field, constructed in 1997, located in the city of Nagoya, Japan. The dome has the capacity to seat up to 40,500 for sports and 49,000 for concerts. It is an example of a geodesic dome.

Iporã is a municipality in the North-West of the State of Paraná, approximately sixty kilometers from the border with Paraguay. Its population in 2020 was estimated to be 13,782. 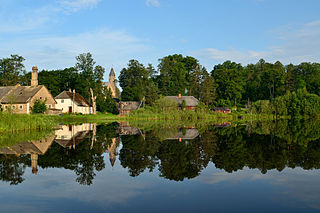 Saba is a neighbourhood in Kampong Ayer, the stilt settlement on the Brunei River in Bandar Seri Begawan, the capital of Brunei. It is officially a mukim (subdistrict) in Brunei-Muara District, as well as parts of the capital's municipal areas. As a mukim, it is headed by a penghulu and the acting incumbent is Mayalin bin Saat.

CHGS-FM is an emergency broadcast system radio station, owned by the municipality of Greenstone, Ontario. The station operates at 94.7 FM in the community of Geraldton.

Suchodoły is a village in the administrative district of Gmina Jeleniewo, within Suwałki County, Podlaskie Voivodeship, in north-eastern Poland. It lies approximately 4 kilometres (2 mi) south-east of Jeleniewo, 11 km (7 mi) north of Suwałki, and 119 km (74 mi) north of the regional capital Białystok.

Zharskiy is a village in the Masally Rayon of Azerbaijan.

Koźmice Wielkie is a village in the administrative district of Gmina Wieliczka, within Wieliczka County, Lesser Poland Voivodeship, in southern Poland. It lies approximately 6 kilometres (4 mi) south-west of Wieliczka and 15 km (9 mi) south-east of the regional capital Kraków.

Kuczów is a village in the administrative district of Gmina Brody, within Starachowice County, Świętokrzyskie Voivodeship, in south-central Poland. It lies approximately 7 kilometres (4 mi) west of Brody, 7 km (4 mi) south-east of Starachowice, and 39 km (24 mi) east of the regional capital Kielce.

The Sydoriv Castle is an imposing ruin of a stronghold built by Marcin Kalinowski in Sydoriv, a village located 7 km south of Husiatyn. The castle is perched on a hilltop which is enclosed on three sides by a river. When built in the 1640s, the structure had seven towers that extended for 178 metres from north to south. It was heavily damaged by the invading Turks in 1672 and was abandoned by its owners in the 18th century.

Bałowo is a village in the administrative district of Gmina Kętrzyn, within Kętrzyn County, Warmian-Masurian Voivodeship, in northern Poland.

Vinařice is a village and municipality in Mladá Boleslav District in the Central Bohemian Region of the Czech Republic.

Vakulenchuk is an urban-type settlement in Chudniv Raion, Zhytomyr Oblast, Ukraine. Population: 1,885 In 2001, population was 2,192.

Bošnjace is a village in the municipality of Lebane, Serbia. According to the 2002 census, the village has a population of 1629 people.

Kostkova is a village in Setomaa Parish, Võru County in southeastern Estonia.

Suha Katalena is a village in Croatia in the Đurđevac municipality.

Preljubovići is a village in the municipality of Sokolac, Bosnia and Herzegovina.

Torraccia is a small village (curazia) located in San Marino. It belongs to the municipality (castello) of Domagnano.