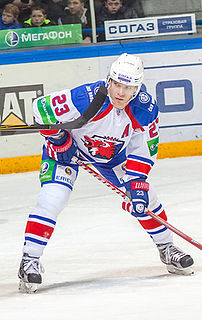 Ľuboš Bartečko is a Slovak former professional ice hockey forward. He began and concluded his career with hometown club, HK ŠKP Poprad in the Slovak Extraliga. He most notably played in the National Hockey League (NHL) for the St. Louis Blues and Atlanta Thrashers. He also competed at three Winter Olympics.

Ľuboš Micheľ is a former top-level Slovak football referee who currently works External Advisor to the Football for PAOK FC. 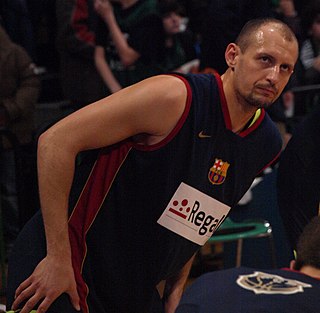 Luboš Bartoň is a Czech retired professional basketball player. He is a 2.02 m tall small forward who last played for FC Barcelona B of Spain's second division.

Luboš Hušek is a Czech footballer. His position is defensive midfielder and he currently plays for Slovakia club FK Senica. He was bought from his home club FK Jablonec 97 as replacement for the departed Tomáš Sivok.

Justín Javorek is a Slovak football coach and former goalkeeper for the Czechoslovakia national football team.

Kolář is a Czech surname meaning "wheeler". Notable people include:

Ľuboš Kupčík is a Slovak football defender who currently plays for the reserve team of ŽP Šport Podbrezová.

Michael Kolář is a Slovak Enduro mountain bike competitor. Kolář also competed as a road bicycle racer between 2012 and 2018 for the Dukla Trenčín–Trek, Tinkoff and Bora–Hansgrohe teams.

Frederik Bilovský is a Slovak football midfielder who currently plays for FK Dubnica, on loan from Nitra.

FK Iskra Borčice is a Slovak association football club located in Borčice. It plays in 4. liga.

Luboš Kolář is a Czech basketball player. He competed in the men's tournament at the 1952 Summer Olympics.

Ľubomír Belák is a Slovak musician, vocalist, music composer and TV producer. His father Michal Belák was a presenter, singer and actor, and his mother Pavla Adámková Beláková was a singer in choir of the Slovak National Theater. His older sister Jana Beláková was a singer and his younger sister Daniela Luthová is a vogue designer. In 1983 he graduated from Philosophical Faculty at the Comenius University in Bratilava.

The 2019 Slovak Open was a professional tennis tournament played on indoor hard courts. It was the 20th edition of the tournament which was part of the 2019 ATP Challenger Tour. It took place in Bratislava, Slovakia between 4 and 10 November 2019.