TheElection Sejm of 1632 (September 27 – November 8, 1632, extended to November 13, 1632) was the Polish–Lithuanian Commonwealth's election sejm that elevated Władysław IV to the Polish throne. Władysław had won the support of most of the political factions; and in the absence of any other serious contenders, he was elected King of Poland and Grand Duke of Lithuania.

While Władysław and his father Sigismund III Vasa tried to ensure Władysław's election during Sigismund's lifetime, the option of premature succession was not popular with the nobility; the Vasas' repeated attempts failed, up to and including at the Sejm of 1631. [1] The question of succession was resolved soon enough however, upon Sigismund's sudden heart attack on 23 April 1632 and death in the morning hours of 30 April. [2]

Every Polish–Lithuanian election sejm was preceded by a convocation sejm. In accordance with the dictates of the law, the Primate of Poland, Jan Wężyk, acting as Interrex , summoned a convocation sejm for June 22, 1632, which lasted through August 17. [3] Krzysztof Radziwiłł was selected as Marshal of the Sejm. Non-Catholics, led by Marshal Radziwiłł and the magnate Bogusław Leszczyński, demanded increased rights; they were opposed by Voivode Tomasz Zamoyski and the future Bishop Aleksander Trzebiński, but managed to gather enough support that this question dominated the ensuing election sejm. [4] [5]

There was little doubt Władysław would succeed his father Sigismund. [6] Some of the Commonwealth's magnates and Catholic clergy did favor Władysław's brother, Jan Kazimierz, in the royal election. However, he had less support than Władysław and his candidacy was never officially put forward, [7] since he was additionally disadvantaged as a younger son in the royal chain of succession and by Sigismund's deathbed blessing of Władysław as his successor. [8]

Foreign courts did not avail themselves of the opportunity to promote their own candidates for the Polish throne. Austria's Habsburgs were well disposed toward the Polish Vasas and did not put forward a contender. [7] Fears that King Gustavus II Adolphus, of the Swedish Vasas, would put forward his own candidacy proved unfounded, [7] though his envoy Steno Belke [9] did argue that Władysław should renounce his claim to the Swedish throne [10] (Władysław declined. [7] ) Foreign envoys such as Papal Nuncio Honorat Visconti [9] and the Holy Roman Emperor's envoy Count Julius Mosberg [9] declared their support for Władysław. [7] The Duke of Prussia, George William, Elector of Brandenburg, asked to be permitted to participate in the election sejm but this request was turned down. [10] Muscovy was just then preparing for war with the Commonwealth and failed to put forward a candidate [11] —indeed, it attacked while the election sejm was subsequently in session.

The Election Sejm of 1632 convened on 27 September at its traditional site at Wola near Warsaw to consider both the royal election and legislative items, with Marshal of the Sejm Jakub Sobieski presiding.

The indecisiveness of the Catholic faction allowed Władysław to campaign for increased rights for Protestants and Eastern Orthodox Christians, and thus he obtained their support. [7] At the same time, his evident religious tolerance did not lose him the support of his Catholic backers. [7] Nor did Władysław's breaking custom to go to Warsaw during the election generate noticeable disapproval. [7]

A commission headed by Władysław drafted "Measures for the Appeasement of the Ruthenian People of the Greek Faith that Live in the Kingdom of Poland and the Grand Duchy of Lithuania," by which Ukrainian Greek Catholic and Orthodox metropolitans were granted legal jurisdiction. [13] Władysław, lobbied by Peter Mogila, also granted the Orthodox Church the right to its own hierarchs, subject to the candidates' confirmation by the government. [14] Many differences regarding the Orthodox Church and the Union of Brest were thus settled. [5] The religious freedoms that had been established in 1573 by the Warsaw Confederation were reaffirmed, and a new tax was adopted, the kwarta , which sent 1/4 of starostwo s' incomes to the Royal Treasury. [15] It was decided to fortify Puck and to create there a port for the Commonwealth Navy. [16] The Cossack delegation's proposal for increased funding and a Cossack register was turned down; similarly, requests from the Royal Army were rejected. [9] Some of the Sejm's proposals were vetoed by the Senate. [10] [17]

The decision on who would be the Commonwealth's next king was reached on November 8, but as the pacta conventa were not yet ready, the official announcement was delayed until November 13. [7] In the pacta conventa, Władysław pledged himself to fund a military school and equipment; to find a way to fund a naval fleet; to maintain current alliances; not to raise armies, give offices or military ranks to foreigners, negotiate peace treaties or declare war without the Sejm's approval; not to take a wife without the Senate's approval; to convince his brothers to take an oath to the Commonwealth; and to transfer the profits from the Royal Mint to the Royal Treasury rather than to a private treasury. [10]

At least 3,543 votes were cast for Władysław. [18] When the election result were announced by the Crown Grand Marshal, Łukasz Opaliński, the nobility (szlachta) who had taken part in the election began festivities in honor of the new king, which lasted three hours. [7]

The next day, November 14, 1632, Władysław signed his pacta conventa and the Henrician Articles that had been required of new Polish kings since the 1573 election of France's Henri de Valois to the Polish throne. [4]

Władysław was crowned king on February 5, 1633, the proceedings continuing into the next day. [19]

The coronation sejm, presided over by Marshal of the Sejm Mikołaj Ostroróg, took place from February 8 to March 17, 1633. [4] It confirmed the Orthodox rights that had been pledged by Władysław, but did not support Władysław's proposal to create a Kawaleria, an honorary brotherhood for his supporters. [4] This would be one of many setbacks that Władysław would suffer at the hands of the Sejm.

The 1633 Sejm would also take more direct control of the royal mint, deepen the sway of serfdom, and accept the petition of Polish Jews to forbid the printing of antisemitic literature, its importation from Western Europe, and its distribution in the Commonwealth. [20] The Sejm also declared war on Muscovy, which had invaded the Commonwealth the previous fall. [10] [11] 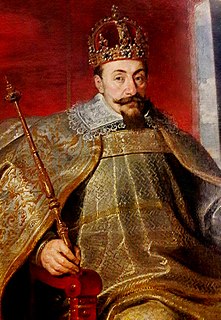 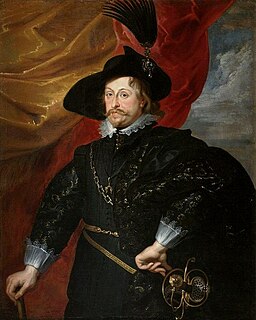 Władysław IV Vasa or Ladislaus IV Vasa was king of Poland, of the House of Vasa, who ruled from 1632 until his death in 1648. Władysław IV was the son of Sigismund III Vasa and his wife, Anna of Austria.

Pacta conventa was a contractual agreement, from 1573 to 1764 entered into between the "Polish nation" and a newly elected king upon his "free election" to the throne.

The liberum veto was a parliamentary device in the Polish–Lithuanian Commonwealth. It was a form of unanimity voting rule that allowed any member of the Sejm (legislature) to force an immediate end to the current session and to nullify any legislation that had already been passed at the session by shouting, Sisto activitatem! or Nie pozwalam!. The rule was in place from the mid-17th century to the late 18th century in the Sejm's parliamentary deliberations. It was based on the premise that since all Polish noblemen were equal, every measure that came before the Sejm had to be passed unanimously. The liberum veto was a key part of the political system of the Commonwealth, strengthening democratic elements and checking royal power and went against the European-wide trend of having a strong executive.

Royal elections in Poland was the election of individual kings, rather than of dynasties, to the Polish throne. Based on traditions dating to the very beginning of the Polish statehood, strengthened during the Piast and Jagiellon dynasties, they reached their final form in the period of the Polish-Lithuanian Commonwealth between 1572 and 1791. The "free election" was abolished by the Constitution of 3 May 1791, which established a constitutional monarchy.

The Smolensk War (1632–1634) was a conflict fought between the Polish–Lithuanian Commonwealth and Russia.

Adam Kisiel also Adam Kysil, was a Ruthenian nobleman, the Voivode of Kiev (1649-1653) and castellan or voivode of Czernihów (1639-1646). He was the last Orthodox senator of the Polish-Lithuanian Commonwealth. Kisiel has become better known for his mediation during the Khmelnytsky Uprising.

Władysław Czapliński was a Polish historian, a professor of the University of Wrocław, author of many popular books about Polish history.

Mikołaj Sienicki of Bończa was a member of the landed gentry of the Kingdom of Poland. He held the office of chamberlain of the land of Chełm and was a notable politician of his period. Considered one of the best Polish political orators, he also held the title of marshal of the Sejm nine times. A Protestant, near the end of his life he became a member of the Polish Brethren and one of the major initiators of, and contributors to the Warsaw Confederation, which introduced new laws of religious tolerance in the Polish-Lithuanian Commonwealth, on a scale unimaginable in contemporary Europe.

The Polish–Swedish War of 1626–1629 was the fourth stage in a series of conflicts between Sweden and Poland fought in the 17th century. It began in 1626 and ended four years later with the Truce of Altmark and later at Stuhmsdorf with the Treaty of Stuhmsdorf.

Urszula Meyerin also Meierin (1570–1635) was a politically influential Polish courtier and mistress to King Sigismund III of Poland. Her real name might have been Gienger, but it is still a matter of dispute among historians; she signed all her letters as Ursula Meyerin. In German, her last name means chamberlain, administrator, manager.

The second Free Election in the Polish-Lithuanian Commonwealth took place in 1575/1576. In the night of June 28–29, 1574, King Henri of Valois secretly left Poland to claim the French throne. The Commonwealth was left without a monarch, and the period of interregnum ended with a double election. After a few months of negotiations, Anna Jagiellon and Stephen Báthory were elected co-rulers.

The third free election in the Polish-Lithuanian Commonwealth took place in 1587, after the death of King Stefan Batory. It began on June 30, 1587, when Election Sejm was summoned in the village of Wola near Warsaw, and ended on December 27 of the same year, when King Sigismund III was crowned in Kraków’s Wawel Cathedral. 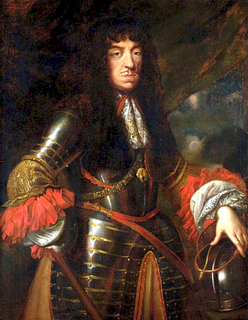 The 1648 free election in the Polish-Lithuanian Commonwealth began on October 6, 1648, and ended on November 17 of the same year. The new King of Poland and Grand Duke of Lithuania was John II Casimir, the younger brother of previous king, Władysław IV, who had died on May 20, 1648.

The Sejm of 1611 was a meeting of the parliament of the Polish–Lithuanian Commonwealth, which took place in Warsaw between September 26 and November 9, 1611. It was called to analyze the ongoing war with Russia, and the recapture of the city of Smolensk. Marshal of the Sejm was an official from Lwow, Jan Swoszowski.