Wikimedia Commons has media related to 1844 .

In the Philippines, it was the only leap year with 365 days, as December 31 was skipped when 1845 began after December 30. 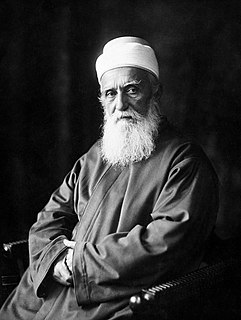 ʻAbdu'l-Bahá, born ʻAbbás, was the eldest son of Baháʼu'lláh and served as head of the Baháʼí Faith from 1892 until 1921. ʻAbdu'l-Bahá was later canonized as the last of three "central figures" of the religion, along with Baháʼu'lláh and the Báb, and his writings and authenticated talks are regarded as sources of Baháʼí sacred literature.

Bábism, also known as the Bábi Faith, is a monotheistic religion which professes that there is one incorporeal, unknown, and incomprehensible God who manifests his will in an unending series of theophanies, called Manifestation of God. It has no more than a few thousand adherents according to current estimates, most of whom are concentrated in Iran. It was founded by ʻAli Muhammad Shirazi who first assumed the title of Báb from which the religion gets its name, out of the belief that he was the gate to the Twelfth Imam. However, throughout his ministry his titles and claims underwent much evolution as the Báb progressively outlined his teachings.

The Badíʻ calendar used in the Baháʼí Faith is a solar calendar consisting of 19 months and 4-5 Intercalary Days, with new year at the northern spring equinox on the date that equinox occurs in Tehran. Each month is named after virtues, as are the days of the week. The first year is dated from 1844 CE, the year in which the Báb began teaching.

Riḍván is a twelve-day festival in the Baháʼí Faith, commemorating Baháʼu'lláh's declaration that he was a Manifestation of God. In the Baháʼí calendar, it begins at sunset on the 13th of Jalál, which translates to the 20th or 21st of April, depending on the date of the March equinox. On the first, ninth and twelfth days of Ridván, work and school should be suspended.

The following is a basic timeline of the Bábí and Baháʼí religions emphasizing dates that are relatively well known. For a more comprehensive chronology of the timeline, see the references at the bottom.

The history of the Baháʼí Faith is often traced through a sequence of leaders, beginning with the Báb's declaration in Shiraz on the evening of May 22, 1844, and ultimately resting on an Administrative Order established by the central figures of the religion. The Baháʼí Faith had its background in two earlier movements in the nineteenth century, Shaykhism and Bábism. Shaykhism centred on theosophical doctrines and many Shaykhis expected the return of the hidden Twelfth Imam. Many Shaykhis joined the messianic Bábí movement in the 1840s where the Báb proclaimed himself to be the return of the hidden Imam. As the Bábí movement spread in Iran, violence broke out between the ruling Shiʻa Muslim government and the Bábís, and ebbed when government troops massacred them, and executed the Báb in 1850.

A Baháʼí pilgrimage currently consists of visiting the holy places in Haifa, Acre, and Bahjí at the Baháʼí World Centre in Northwest Israel. Baháʼís do not have access to other places designated as sites for pilgrimage.

The Baháʼí Faith has eleven holy days, which are important anniversaries in the history of the religion. On nine of these holy days, work is suspended. There is no fixed format for any of the holy days, and Baháʼí communities organize their own commemorative meetings.

Ayyám-i-Há is a period of intercalary days in the Baháʼí calendar, when Baháʼís celebrate the Festival of Ayyám-i-Há. The four or five days of this period are inserted between the last two months of the calendar. The length of Ayyám-i-Há varies according to the timing of the following vernal equinox so that the next year always starts on the vernal equinox. 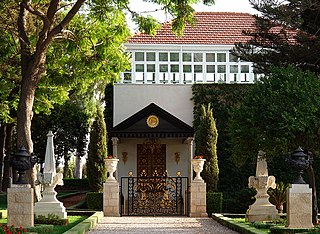 Naw-Rúz is the first day of the Baháʼí calendar year and one of eleven holy days for adherents of the Baháʼí Faith. It occurs on the vernal equinox, on or near March 21, which is the traditional Iranian New Year.

Mírzá Muḥammad Muṣṭafá al-Baghdádí (1837/8—1910) was a prominent Iraqi adherent of the Baháʼí faith and one of 19 Apostles of Baháʼu'lláh. Mustafá was among the leading Baháʼís in Iraq until he moved to Beirut in the late 1870s, where he coordinated pilgrims going to see Baháʼu'lláh in ʻAkká, and later he was involved with the movement of the Báb's remains to ʻAkká.

The Báb, born Sayyed ʿAlí Muḥammad Shírází, was the founder of Bábism, and one of the central figures of the Baháʼí Faith.

Baháʼu'lláh (1817–1892) was the prophet-founder of the Baháʼí Faith. He was born to an aristocratic family in Iran, and was exiled due to his adherence to the messianic Bábí Faith. In 1863, in Iraq, he first announced his claim to a revelation from God, and spent the rest of his life in further imprisonment in the Ottoman Empire. His teachings revolved around the principles of unity and religious renewal, ranging from moral and spiritual progress to world governance.

The Baháʼí Faith is a relatively new religion teaching the essential worth of all religions and the unity of all people, established by Baháʼu'lláh in the 19th-century Middle East and now estimated to have a worldwide following of 5–8 million adherents, known as Baháʼís.

The Baháʼí Faith in France started after French citizens observed and studied the religion in its native Persia in the mid-19th century. The first followers of the religion declared their belief shortly before 1900, the community grew and the understanding of Baha'u'llah's Revelation was assisted by ʻAbdu'l-Bahá's trip to France in late 1911 and early 1913. The number of Baha'is grew, tests and difficulties were overcome, and the community established its National Assembly in 1958. The community has been reviewed a number of times by researchers. According to the 2005 Association of Religion Data Archives data there are close to some 4,400 Baháʼís in France and the French government is among the many who have been alarmed at the persecution of Baháʼís in modern Iran.

The Baháʼí Faith was discussed in the writings of various Europeans during the lifetime of its founder, Baháʼu'lláh. His son and successor, ʻAbdu'l-Bahá, travelled to France and Great Britain and gave talks to audiences there. There is a Baháʼí House of Worship in Langenhain, Germany, which was completed in 1964. The Association of Religion Data Archives reported national Baháʼí populations ranging from hundreds to over 35,000 in 2005. The European Union and several European countries have condemned the persecution of Baháʼís in Iran.