Wikimedia Commons has media related to 1848 .

1848 is historically famous for the wave of revolutions, a series of widespread struggles for more liberal governments, which broke out from Brazil to Hungary; although most failed in their immediate aims, they significantly altered the political and philosophical landscape and had major ramifications throughout the rest of the century. 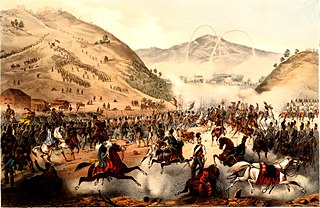 The Battle of Pákozd was a battle in the Hungarian Revolution of 1848, fought on the 29 September 1848 in the Pákozd – Sukoró – Pátka triangle. It was the first and one of the most important battles of the revolution, in which the Hungarian revolutionary army led by Lieutenant-General János Móga clashed with the troops of the Croatian Ban Josip Jelačić. 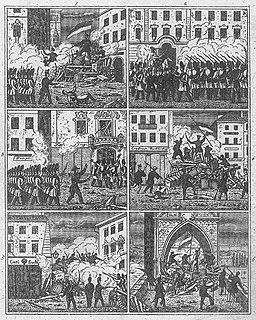 The Revolutions of 1848 in the Austrian Empire were a set of revolutions that took place in the Austrian Empire from March 1848 to November 1849. Much of the revolutionary activity had a nationalist character: the Empire, ruled from Vienna, included ethnic Germans, Hungarians, Slovenes, Poles, Czechs, Slovaks, Ruthenians (Ukrainians), Romanians, Croats, Venetians and Serbs; all of whom attempted in the course of the revolution to either achieve autonomy, independence, or even hegemony over other nationalities. The nationalist picture was further complicated by the simultaneous events in the German states, which moved toward greater German national unity. 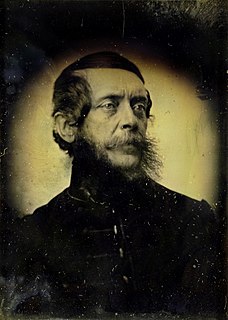 Lajos Kossuth de Udvard et Kossuthfalva was a Hungarian nobleman, lawyer, journalist, politician, statesman and governor-president of the Kingdom of Hungary during the revolution of 1848–1849.

Artúr Görgei de Görgő et Toporc was a Hungarian military leader renowned for being one of the greatest generals of the Hungarian Revolutionary Army. 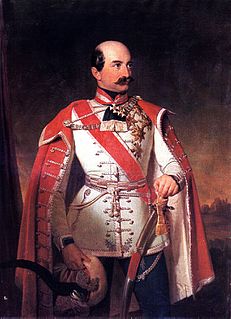 Count Josip Jelačić von Bužim was a Croatian lieutenant field marshal in the Imperial-Royal Army and politician, the Ban of Croatia between 23 March 1848 and 19 April 1859. He was a member of the House of Jelačić and a noted army general, remembered for his military campaigns during the Revolutions of 1848 and for his abolition of serfdom in Croatia. 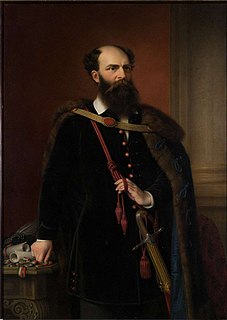 Count Lajos Batthyány de Németújvár was the first Prime Minister of Hungary. He was born in Pozsony on 10 February 1807, and was executed by firing squad in Pest on 6 October 1849, the same day as the 13 Martyrs of Arad. 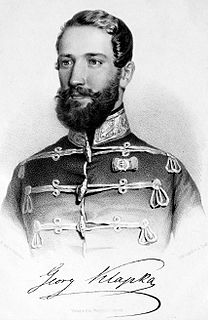 The House of Batthyány is the name of an ancient and distinguished Hungarian Magnate family. Members of this family bear the title Count/Countess (Graf/Gräfin) Batthyány von Német-Ujvar respectively, while the title of Prince (Fürst) von Batthyány-Strattmann is reserved only for the Head of the family. A branch of the family was notable in Croatia as well, producing several Bans (viceroys) of Croatia in the 16th, 17th and 18th century.

The Thirteen Martyrs of Arad were the thirteen Hungarian rebel generals who were executed by the Austrian Empire on 6 October 1849 in the city of Arad, then part of the Kingdom of Hungary, after the Hungarian Revolution (1848–1849). The execution was ordered by the Austrian general Julius Jacob von Haynau.

The Revolutions of 1848, known in some countries as the Springtime of the Peoples or the Springtime of Nations, were a series of political upheavals throughout Europe starting in 1848. It remains the most widespread revolutionary wave in European history to date. 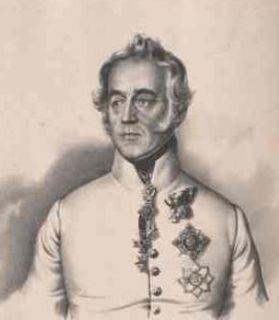 Baron Ádám Récsey de Récse was a Hungarian general, joined the army of Habsburg monarchy, and briefly a politician who was appointed illegally as the Prime Minister of Hungary by King Ferdinand V during the Revolution of 1848, serving in this capacity from 3 October to 7 October 1848. Récsey countersigned his own appointment, neglecting the Diet of Hungary. He resigned when an uprising broke out in Vienna in the effects of the Hungarian Revolution. He was the only Hungarian Prime Minister, who was born in the 18th century. 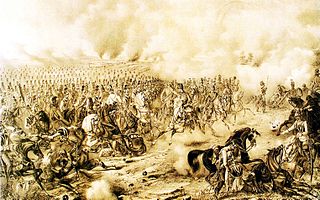 The Battle of Schwechat was a battle in the Hungarian Revolution of 1848, fought on 30 October 1848 between the revolutionary Hungarian Army against the army of the Austrian Empire, in Schwechat, near Vienna. This was the last battle of 1848 in the Transdanubian campaign. The Hungarian Army was under the command of János Móga and the Austrian Army was under the command of Alfred I, Prince of Windisch-Grätz. 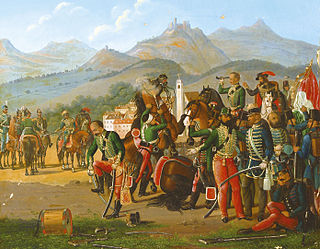 The Surrender at Világos, which was the formal end of the Hungarian Revolution of 1848, took place on 13 August 1849, at Világos,. The terms were signed by Hungarian General Artúr Görgey on the rebels' side and Count Theodor von Rüdiger of the Russian Imperial Army. Following the capitulation, General Julius Jacob von Haynau was appointed Imperial plenipotentiary in the country and brutally re-subjugated it.

Records of prime ministers of Hungary from 1848 to the present. 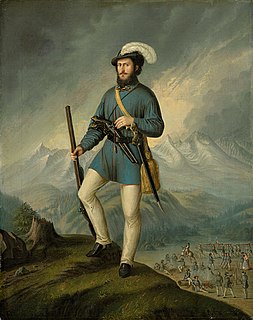 The Slovak Uprising , Slovak Volunteer Campaigns or Slovak Revolt was an uprising of Slovaks in Western parts of Upper Hungary with the aim of equalizing Slovaks, democratizing political life and achieving social justice within the 1848–49 revolutions in the Habsburg Monarchy. It lasted from September 1848 to November 1849. In October 1848, Slovak leaders replaced their original Hungaro-federal program by Austro-federal, called for the separation of a Slovak district from the Kingdom of Hungary and for the formation of a new autonomous district within the framework of the Habsburg Monarchy. 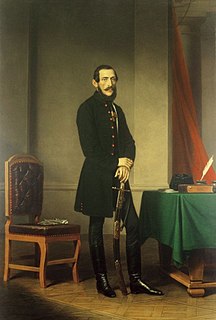 László Csány was a Hungarian politician, who served as Minister of Public Works and Transport in 1849. He is a martyr of the Hungarian Revolution of 1848.

The Hungarian State was a short-lived state that existed for 4 months in the last phase of the Hungarian Revolution of 1848–49.