Although the official date of the census date was June 1, 1850, [1] completed census forms indicate that the surveys continued to be made throughout the rest of the year. [2] [3]

This was the first census where there was an attempt to collect information about every member of every household; women and children were named. Slaves were included by gender and estimated age on Slave Schedules, listed by the name of the owner. Prior to 1850, census records had recorded only the name of the head of the household and broad statistical accounting of other household members (three children under age five, one woman between the age of 35 and 40, etc.). This was also the first census to ask about place of birth of free residents.

Hinton Rowan Helper made extensive use of the 1850 census results in his influential anti-slavery book The Impending Crisis of the South (1857).

Full documentation for the 1850 population census, including census forms and enumerator instructions, is available from the Integrated Public Use Microdata Series.

The 1850 United States census collected a great amount of data that gave insight into the state of the U.S. economy in 1850. Some of the data revealed the growth of the economy with regard to agricultural and manufactured production, international trade, federal debt, taxation, transportation, education, and land expansion.

Manufactured Production
This census included the total manufactured production (in dollars), the total amount of capital invested, the total value of wages paid, the percent of profit (by state and total), the profit by state of major industries (cotton, wool, various iron work, breweries, fishing, salt), and other less significant statistics. Total manufactured production was valued at just over one billion dollars. This is a great increase over the totals estimated in 1820 and 1840. Also, in total, the manufacturing industry recorded an overall profit of 43%.

Federal Debt
This census contains yearly federal debt totals, total federal revenues, and total expenditures from 1790 to 1853. The total debt of the United States on July 1, 1854, was roughly 47.2 million dollars.

Taxation
The census contains some calculation of total annual federal taxes, but it is incomplete. It does however, give state taxation totals.

Transportation and Communication
This census calculates the total cost, size, and quantity of railroads and canals. The funded debt for railroads and canals in 1853 was 130 million. Their gross earnings were more than 38 million dollars. This census also contains estimates for growth in mileage of telegraphic lines in the United States. In 1853 the country contains 89 telegraph lines that stretched 23,261 miles (37,435 km). When published in 1854, the country had an estimated 30,000 miles (48,000 km) of telegraphic lines, a drastic increase.

Education
This census displays the advances of the United States in education and literacy by documenting the number of libraries, the number of schools (public, private, and colleges), state literacy rates, the total newspaper production and consumption, the educational levels of differing races, the total value of tuition costs, the amount of federal land given for education, and other various statistics.

Land Expansion
The 1850 census shows the great amount of territorial expansion that took place in the United States, following the Admission of Texas, the Oregon Treaty, and the Treaty with Mexico following the war in 1848. These three pieces of territory totaled an addition of more than a million square miles to the nation. In 1850, the United States contained 31 states and 4 organized territories (Minnesota, New Mexico, Oregon, Utah).

Significance
The 1850 United States census can be seen as a historical document that gives insight into the state of the nation's economy in 1850. It is much more detailed and provides more information than the 1840 census.

Microdata from the 1850 population census are freely available through the Integrated Public Use Microdata Series. Aggregate data for small areas, together with compatible cartographic boundary files, can be downloaded from the National Historical Geographic Information System.

The Utah Territorial census was taken in 1851. Secretary Broughton Harris refused to certify the census of Utah territory. Harris complained that Brigham Young had conducted the census without him, claimed several irregularities, and consequently withheld funds reserved for the census. [11] The controversy contributed to Harris' decision to join other Runaway Officials of 1851 and abandon his post in Utah Territory. Relationships with the federal government continued to sour and eventually resulted in the Utah War.

Local government officials feared having an enslaved population might impede the territory's quest for statehood, since certain members of Congress were concerned about expansion of slavery into the western territories. [12] The 1850 census slave schedule for Utah Territory reported only 26 slaves, with a note that all of them were heading to California, and did not include any enslaved people remaining in the territory. [13] John David Smith estimates that there were 100 blacks in Utah by 1850, with two-thirds of them enslaved. [14]

The economy of Canada is a highly developed mixed-market economy. It is the 8th-largest GDP by nominal and 15th-largest GDP by PPP in the world. As with other developed nations, the country's economy is dominated by the service industry which employs about three quarters of Canadians. Canada has the third-highest total estimated value of natural resources, valued at US$33.98 trillion in 2019. It has the world's third-largest proven oil reserves and is the fourth-largest exporter of crude oil. It is also the fifth-largest exporter of natural gas.

The economy of the United States Virgin Islands is primarily dependent upon tourism, trade, and other services, accounting for nearly 60% of the Virgin Island's GDP and about half of total civilian employment. Close to two million tourists per year visit the islands. The government is the single largest employer. The agriculture sector is small, with most food being imported. The manufacturing sector consists of rum distilling, electronics, pharmaceuticals, and watch assembly. Rum production is significant. Shipments during a six-month period of fiscal year 2016 totaled 8,136.6 million proof gallons. 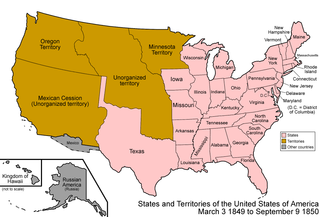 The Compromise of 1850 was a package of five separate bills passed by the United States Congress in September 1850 that defused a political confrontation between slave and free states on the status of territories acquired in the Mexican–American War. It also set Texas' western and northern borders and included provisions addressing fugitive slaves and the slave trade. The compromise was brokered by Whig senator Henry Clay and Democratic senator Stephen A. Douglas, with the support of President Millard Fillmore.

This article is about the demographic history of the United States.

The legal institution of human chattel slavery, comprising the enslavement primarily of Africans and African Americans, was prevalent in the United States of America from its founding in 1776 until 1865, predominantly in the South. Slavery was established throughout European colonization in the Americas. From 1526, during early colonial days, it was practiced in Britain's colonies, including the Thirteen Colonies that formed the United States. Under the law, an enslaved person was treated as property that could be bought, sold, or given away. Slavery lasted in about half of U.S. states until abolition. In the decades after the end of Reconstruction, many of slavery's economic and social functions were continued through segregation, sharecropping, and convict leasing. 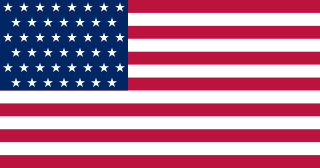 The Territory of New Mexico was an organized incorporated territory of the United States from September 9, 1850, until January 6, 1912. It was created from the U.S. provisional government of New Mexico, as a result of Nuevo México becoming part of the American frontier after the Treaty of Guadalupe Hidalgo. It existed with varying boundaries until the territory was admitted to the Union as the U.S. state of New Mexico. This jurisdiction was an organized, incorporated territory of the US for nearly 62 years, the longest period of any territory in the contiguous United States.

The United States census is a census that is legally mandated by the U.S. Constitution, and takes place every 10 years. The first census after the American Revolution was taken in 1790, under Secretary of State Thomas Jefferson; there have been 23 federal censuses since that time. 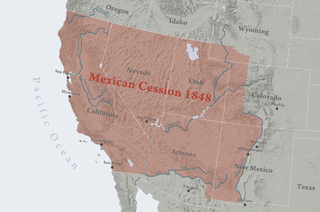 The Mexican Cession is the region in the modern-day southwestern United States that Mexico ceded to the United States in the Treaty of Guadalupe Hidalgo in 1848 after the Mexican–American War. This region had not been part of the areas east of the Rio Grande that had been claimed by the Republic of Texas, though the Texas annexation resolution two years earlier had not specified the southern and western boundary of the new state of Texas. At roughly 529,000 square miles (1,370,000 km2), the Mexican Cession was the third-largest acquisition of territory in U.S. history, surpassed only by the 827,000-square-mile (2,140,000 km2) Louisiana Purchase and the 586,000-square-mile (1,520,000 km2) Alaska Purchase. 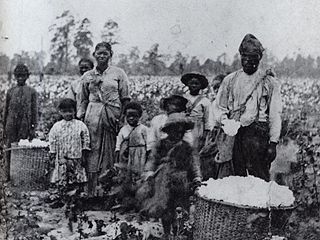 In the history of the Southern United States, the Antebellum Period spanned the end of the War of 1812 to the start of the American Civil War in 1861. The Antebellum South was characterized by the use of slavery and the culture it fostered. As the era proceeded, Southern intellectuals and leaders gradually shifted from defending slavery as an embarrassing and temporary system, to a full-on defense of slavery as a positive good, and harshly criticized the budding abolitionist movement.

The domestic slave trade, also known as the Second Middle Passage and the interregional slave trade, was the term for the domestic trade of enslaved people within the United States that reallocated slaves across states during the Antebellum period. It was most significant after 1808, when the importation of slaves was prohibited. Historians estimate that one million slaves were taken in a forced migration from the Upper South, primarily Maryland and Virginia, to the territories and then new states of the Deep South: Georgia, Alabama, Florida, Louisiana, Mississippi, Arkansas, and Texas.

The United States census of 1820 was the fourth census conducted in the United States. It was conducted on August 7, 1820. The 1820 census included six new states: Louisiana, Indiana, Mississippi, Illinois, Alabama and Maine. There has been a district wide loss of 1820 census records for Arkansas Territory, Missouri Territory and New Jersey.

The United States census of 1870 was the ninth United States census. It was conducted by the Census Bureau from June 1, 1870, to August 23, 1871. The 1870 census was the first census to provide detailed information on the African-American population, only five years after the culmination of the Civil War when slaves were granted freedom. The total population was 38,925,598 with a resident population of 38,558,371 individuals, a 22.6% increase from 1860. The 1870 census' population estimate was controversial, as many believed it underestimated the true population numbers, especially in New York and Pennsylvania.

Wikimedia Commons has media related to 1850 United States Census .
This page is based on this Wikipedia article
Text is available under the CC BY-SA 4.0 license; additional terms may apply.
Images, videos and audio are available under their respective licenses.