The 1879 FA Cup Final was contested by Old Etonians and Clapham Rovers at the Kennington Oval, London Borough of Lambeth, South London. Old Etonians won by 1–0, the only goal scored by Charles Clerke.

Although Clapham dominated the early stages of the final, with Norman Bailey having two attempts on target, Herbert Whitfeld continued to run at the Clapham defenders with little assistance from his colleagues. After a goalless first-half, the only goal of the game came after 59 minutes, when Charles Clerke scored from close range following a run from Harry Goodhart. [1] The old Etonians thus claimed the cup for the first time in what was considered to be "the poorest FA Cup Final to date". [2]

Wanderers Football Club is an English football club based in Upper Norwood, London. The original club was an amateur one founded as "Forest Football Club" in 1859. In 1864, it changed its name to "Wanderers". Comprising mainly former pupils of the leading English public schools, Wanderers was among the dominant teams of the early years of organised football and won the Football Association Challenge Cup on five occasions, including defeating Royal Engineers in the first FA Cup final in 1872.

Clapham Rovers was from its foundation in 1869 a leading English sports organisation in the two dominant codes of football, association football and rugby union. It was a prominent club in the late 19th century but is now defunct. The club played variously on Clapham Common, Tooting Bec Common and Wandsworth Common and wore a cerise and French-grey kit. 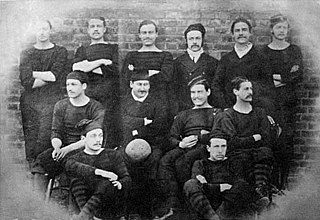 The 1875 FA Cup Final was a football match between Royal Engineers and Old Etonians on 13 March 1875 at Kennington Oval in London. It was the fourth final of the world's oldest football competition, the Football Association Challenge Cup. Heading into the final, the Royal Engineers were playing in their third final after losing the 1872 and 1874 finals while the Old Etonians were playing in their first FA Cup final. 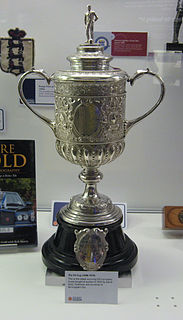 The 1876 FA Cup Final was a football match between Wanderers and Old Etonians on 11 March 1876 at Kennington Oval in London. It was the fifth final of the world's oldest football competition, the Football Association Challenge Cup. Wanderers had won the Cup on two previous occasions. The Etonians were playing in their second consecutive final, having lost in the 1875 final. Both teams had conceded only one goal in the four rounds prior to the final. In the semi-finals Wanderers defeated Swifts and the Etonians beat the 1874 FA Cup winners Oxford University.

The 1880 FA Cup Final was contested by Clapham Rovers and Oxford University at the Kennington Oval. Clapham Rovers won 1–0, the only goal being scored by Clopton Lloyd-Jones. 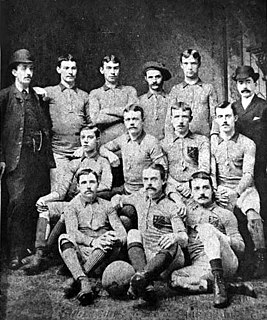 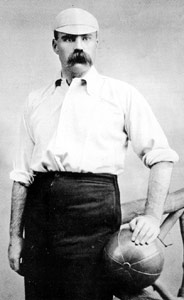 Norman Coles Bailey was an English footballer from the late 19th century, who made 19 appearances for England playing at half back.

The 1874–75 FA Cup was the fourth season of England's oldest football tournament, the Football Association Challenge Cup or "FA Cup". 29 teams entered, one more than the previous season, although four of the 29 never played a match. The final was contested by Royal Engineers – playing in their third final in the four seasons of the FA Cup – and Old Etonians – playing in their first final. On their way to the final, Royal Engineers knocked out Cambridge University in the Second Round and holders Oxford University in the Semi-finals, while Old Etonians only managed to score more than one goal in one match: their second replay against Swifts, which they won 3–0. The biggest win of the competition was recorded by two-time FA Cup winners Wanderers, who beat Farningham 16–0 in the First Round.

Robert Andrew Muter Macindoe Ogilvie was an English footballer who made one appearance as a defender for England in 1874, and was a member of the Clapham Rovers team that won the 1880 FA Cup Final.

Reginald Halsey Birkett was an English footballer who played for Clapham Rovers, as well as the English national side. He also played international rugby union for England in 1871, in the first international rugby match. In this match he scored England's first try.

Edgar Field was an English amateur footballer who helped Clapham Rovers win the FA Cup in 1880. He made two appearances for England as a full back.

William Lindsay was an English amateur footballer who, generally playing as a full back, helped the Wanderers win the FA Cup in 1876, 1877 and 1878 and made one appearance for England in 1877. He also played cricket for Surrey between 1876 and 1882.

Lindsay Bury was an English amateur footballer who, playing as a full back, helped the Old Etonians win the FA Cup in 1879 and made two appearances for England in the 1870s. He also played cricket for Hampshire in 1877 and for Cambridge University in 1877 and 1878.

Arthur John Stanley was an English sportsman and stockbroker. An association footballer, he was member of Clapham Rovers F.C., for whom he played as an outside-forward. He also played both singles and doubles tennis at Wimbledon.

Clopton Allen Lloyd-Jones was an English businessman and amateur sportsman, best known for football and cricket. He played for the Clapham Rovers when they won the FA Cup in 1880 and was selected, but did not play, for Wales as an international.

Charles John Clerke was an English amateur footballer who scored the only goal in the 1879 FA Cup Final.

Edgar Lubbock LLB was an English amateur footballer who twice won the FA Cup and played first-class cricket. He later became a partner in the Whitbread Brewery, a Director and Deputy Governor of the Bank of England and the Master of the Blankney Foxhounds.