The 1894 FA Cup Final was contested by Notts County and Bolton Wanderers at Goodison Park. Notts County won 4–1, with goals by James Logan (3) and Arthur Watson. Jim Cassidy scored for Bolton. Notts County became the first team from outside the top flight to win the FA Cup.

1894 in sports describes the year's events in world sport. 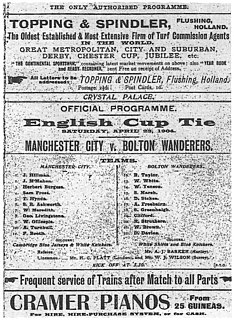 The 1904 FA Cup Final was a football match between Bolton Wanderers and Manchester City on 23 April 1904 at Crystal Palace in London. The showpiece match of English football's primary cup competition, the Football Association Challenge Cup, it was the 32nd Cup final, and the tenth at Crystal Palace.

James Logan was a Scottish professional footballer. He was most famous for scoring a hat-trick in the 1894 FA Cup Final for Notts County in a 4–1 victory over Bolton Wanderers.

Jim Cassidy was a Scottish footballer who played most of his career as a centre-forward for Bolton Wanderers in the late 19th century.

The FA Cup, from this season onwards, began to incorporate a series of qualifying rounds in order to determine qualifiers for the actual Cup competition itself. The qualifying rounds were made up of amateur teams, semi-professional teams, and professional sides not yet associated with the Football League. The only game to be played on Christmas Day took place, Linfield Athletic beating Cliftonville 7–0. Everton became the first Football League team to withdraw from the Cup after drawing Ulster in the first qualifying round. 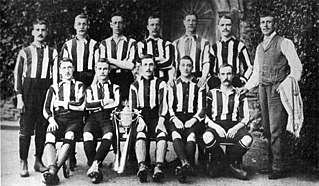 The 1893–94 FA Cup was the twenty-third edition of the world's oldest football knockout competition, The Football Association Challenge Cup, or FA Cup. The cup was won by Notts County of the Football League Second Division, who defeated Bolton Wanderers 4–1 in the final to win the cup for the first and, to date, only time.

The 1902–03 FA Cup was the 32nd season of the world's oldest association football competition, the Football Association Challenge Cup. Bury won the competition for the second and final time, beating Derby County 6–0 in the final at Crystal Palace. This scoreline still stands as a record victory in an FA Cup final.

The 1895–1896 FA Cup was the 25th season of the world's oldest association football competition, the Football Association Challenge Cup. The cup was won by The Wednesday, who defeated Wolverhampton Wanderers 2–1 in the final of the competition, played at Crystal Palace in London. This was Wednesday's first victory in the FA Cup.

George Samuel Eccles was an English footballer who played at right-back in the Football League and Southern League for Burslem Port Vale, Wolverhampton Wanderers, Everton, Preston North End, West Ham United and Bolton Wanderers. He helped Bolton Wanderers to win promotion out of the Second Division in 1904–05.

Daniel Rodger Bruce was a Scotland international footballer who played on the losing side in the 1890 Scottish Cup Final for Vale of Leven and on the winning side in the 1894 FA Cup Final for Notts County. He scored 49 goals in 98 appearances in the Football League playing for Notts County and Small Heath. He played as a left-sided or centre forward.