The three major contenders for the presidential nomination were Roosevelt, Garner and former governor of New York and 1928 presidential candidate, Al Smith. They roughly represented three competing factions of the Democratic Party. Smith was supported by the Tammany Hall machine in New York City, and had many supporters in the Democratic National Committee, as well as in Chicago. Chicago mayor Anton Cermak packed the hall with Smith supporters.

Roosevelt was supported by a solid majority of the delegates, and had the support of Senators Burton Wheeler, Cordell Hull, Alben Barkley, and Huey Long, who held the Deep South for Roosevelt. The new Democratic coalition would begin at this convention: Roosevelt brought into the Democratic fold western progressives, ethnic minorities, rural farmers, and intellectuals. Supporters of Roosevelt pushed for the abolition of the two thirds rule (which required the presidential nominee to win the votes of two thirds of the delegates), but backlash killed the idea. [2]

Garner had support from two powerful individuals, California newspaper magnate William Randolph Hearst and Senator William Gibbs McAdoo. But he was never a serious threat, and never bothered to campaign for the position. However, the faction that supported Garner was important because it could break a potential deadlock between Smith and Roosevelt.

After three ballots, Roosevelt had not secured the 770 votes necessary for the nomination, and his campaign feared that his support had peaked. As New York, New Jersey, Massachusetts, and Connecticut did not support Roosevelt, he needed McAdoo, who had the California delegation, and Garner, who had Texas's. Roosevelt's campaign was able to persuade Garner to release his delegates to vote for Roosevelt, possibly with the help of Hearst, who disliked Roosevelt but hated Smith and Newton D. Baker, a possible compromise candidate. When McAdoo, who himself had been denied nomination by the two thirds rule at the 1924 convention, announced that California would back Roosevelt, the convention realized that Roosevelt had the necessary number of delegates to win the nomination. [2] Roosevelt received 945 votes on the fourth ballot to Smith's 190. Garner became the vice-presidential candidate, likely as part of a deal for his delegates. [3] McAdoo had also hoped to be on the ticket, but his inclusion was opposed by Hearst. [4]

In his acceptance speech, Roosevelt broke tradition and established the precedent of formally accepting the nomination in person at the convention. In his speech, he pledged "a new deal for the American people". [3]

The 1904 United States presidential election was the 30th quadrennial presidential election, held on Tuesday, November 8, 1904. Incumbent Republican President Theodore Roosevelt defeated the Democratic nominee, Alton B. Parker. Roosevelt's victory made him the first president to win a term in his own right after having ascended to the presidency upon the death of his predecessor, William McKinley. 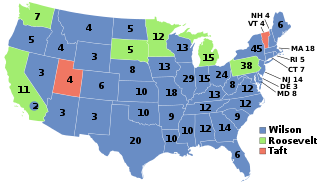 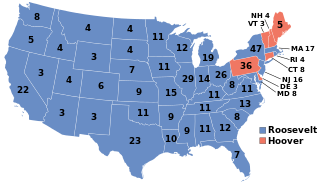 The 1932 United States presidential election was the 37th quadrennial presidential election, held on Tuesday, November 8, 1932. The election took place against the backdrop of the Great Depression. Incumbent Republican President Herbert Hoover was defeated in a landslide by Democrat Franklin D. Roosevelt, the Governor of New York. The election marked the effective end of the Fourth Party System, which had been dominated by Republicans.

The 1948 Democratic National Convention was held at Philadelphia Convention Hall in Philadelphia, Pennsylvania, from July 12 to July 14, 1948, and resulted in the nominations of President Harry S. Truman for a full term and Senator Alben W. Barkley of Kentucky for vice president in the 1948 presidential election. One of the decisive factors in convening both major party conventions in Philadelphia that year was that the Philadelphia area was part of the newly-developing broadcast television market. In 1947, TV stations in New York City, Washington and Philadelphia were connected by a coaxial cable, so in 1948 two of the three new television networks, NBC and CBS, had the ability to telecast along the east coast live gavel to gavel coverage of both conventions. In television's early days, live broadcasts were not routinely recorded, but a few minutes of Kinescope film of the conventions has survived.

The 1924 Democratic National Convention, held at the Madison Square Garden in New York City from June 24 to July 9, 1924, was the longest continuously running convention in United States political history. It took a record 103 ballots to nominate a presidential candidate. It was the first major party national convention that saw the name of a woman, Lena Springs, placed in nomination for the vice president. John W. Davis, a dark horse, eventually won the presidential nomination on the 103rd ballot, a compromise candidate following a protracted convention fight between distant front-runners William Gibbs McAdoo and Al Smith. 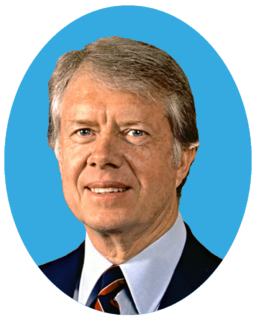 The 1980 National Convention of the U.S. Democratic Party nominated President Jimmy Carter and Vice President Walter Mondale for reelection. The convention was held in Madison Square Garden in New York City from August 11 to August 14, 1980. 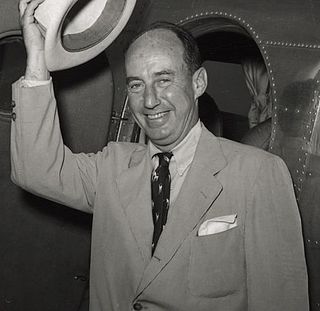 The 1952 Democratic National Convention was held at the International Amphitheatre in Chicago, Illinois from July 21 to July 26, 1952, which was the same arena the Republicans had gathered in a few weeks earlier for their national convention from July 7 to July 11, 1952. Four major candidates sought the presidential nomination: U.S. Senator Estes Kefauver of Tennessee, Governor Adlai E. Stevenson, II, of Illinois, Senator Richard Russell of Georgia and Averell Harriman of New York.

The 1936 Democratic National Convention was held in Philadelphia, Pennsylvania from June 23 to 27, 1936. The convention resulted in the nomination of President Franklin D. Roosevelt and Vice President John N. Garner for reelection. 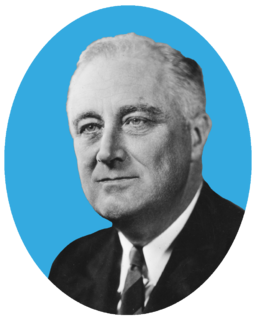 The 1924 Democratic presidential primaries were part of the selection process by which voters of the Democratic Party chose its nominee for President of the United States in the 1924 U.S. presidential election. The concept of a primary election, where any registered party member would vote for a candidate, was relatively new in the American political landscape. In only 12 states were actual primaries held, and even in those the results were not universally binding for the delegates to the Democratic National Convention, where the presidential candidate would be formally chosen. In most of the country, the selection of delegates was confined to state-level conventions and caucuses, under the heavy hand of local political machines. Though William Gibbs McAdoo won a vast majority of states, and much more than half of the popular vote, in those twelve states that held primary elections, it meant little to his performance nationwide. Many of the delegations from states that did not hold primary elections favored his main rivals, Oscar Underwood of Alabama and Al Smith of New York, neither of which won any primary elections. As well, the primaries that McAdoo did not win were won by "local sons" who stood no chance of winning the nomination, or in some cases were not even formal candidates. Once at the convention, the party was deadlocked for 102 straight ballots, before dark horse candidate John W. Davis, was chosen on the 103rd ballot. Davis went on to lose the election to Republican candidate Calvin Coolidge. 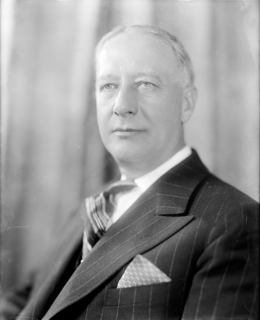 Al Smith, Governor of New York, was a candidate for President of the United States in the 1928 election. His run was notable in that he was the first Catholic nominee of a major party, he opposed Prohibition, and he enjoyed broad appeal among women, who had won the right of suffrage in 1920.

Al Smith, Governor of New York, was a candidate for Democratic nomination for President of the United States in the 1924 election.

Al Smith, former governor of New York and the 1928 Democratic presidential nominee, ran an unsuccessful campaign for the party's 1932 presidential nomination. He ultimately lost to Franklin Delano Roosevelt, his one-time political ally, who would go on to win the general election.