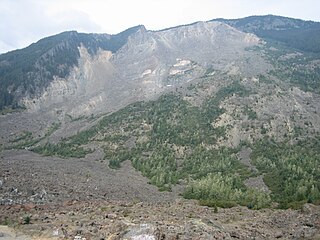 The Hope Slide was the second largest recorded landslide in Canada. It occurred in the morning hours of January 9, 1965 in the Nicolum Valley in the Cascade Mountains near Hope, British Columbia, and killed four people. The volume of rock involved in the landslide has been estimated at 47 million cubic metres.

The Pittsburgh Miners were a professional soccer club based in Pittsburgh, Pennsylvania. They were a member of the American Soccer League in 1975 but folded at the end of the season after finishing with a record of 1-16-3. Joe Luxbacher was the top scorer with six goals and 4 assists .

Normie McLeod is a former Canadian soccer player. He was a national champion with Canadian clubs Vancouver Hale-Co FC (1956). As a teenager, he was Canada's youngest player during FIFA World Cup Qualifiers in 1957. After his retirement, he became an honoured member of the Canada Soccer Hall of Fame.

The Toronto Indians were a football team from Toronto, Ontario and a member of the Ontario Rugby Football Union, a league that preceded the Canadian Football League. After the Toronto Balmy Beach Beachers moved to the Interprovincial Rugby Football Union in 1941, the Indians began play in the ORFU to fill the void. Ironically, these two teams would merge in 1948 and would continue to be known as the Beachers after that season.

The Ontario Tankard is the Southern Ontario provincial championship for men's curling. The winner represents Team Ontario at the Tim Hortons Brier. The tournament is overseen by CurlON.

Statistics of North American Soccer League in season 1982. This was the 15th season of the NASL.

The 1941 Winnipeg Blue Bombers finished in 1st place in the WIFU with a 6–2 record. The Blue Bombers won their third Grey Cup championship by defeating the Ottawa Rough Riders 18–16.

After a four year absence due to the First World War, the Grey Cup was up for grabs once again as a couple of familiar foes battled for the trophy. The Toronto Varsity Blues defeated the Toronto Argonauts. It was the final time these cross-town rivals challenged each other for the Grey Cup.

Harold D. Krebs was a Canadian football player who played for the Edmonton Eskimos, Hamilton Tiger-Cats, Toronto Argonauts, Montreal Alouettes and Calgary Stampeders. He won the Grey Cup with the Eskimos in 1956. He played junior football previously for the Kitchener-Waterloo Dutchmen and London Lords. His son, Tom Krebs also played for the Edmonton Eskimos in the 1980s. He was later working in the real estate investment business in Calgary. In 1969, Krebs filed a lawsuit against the Stampeders, alleging that he was forced to play games while injured. He died on June 3, 2019.