At the end of the regular season, the Chargers (11–3) won the Western Division for the third time in the four-year existence of the AFL. [3] In the Eastern Division, the Patriots and the Buffalo Bills had identical 7–6–1 records, which required a tiebreaker playoff game on December 28 in Buffalo. [4] [5]

In their final regular season games on Saturday, December 14, Boston lost and Buffalo won to draw even in the standings. Three-time division winner Houston (6–6) controlled their own destiny, but lost the next day and were eliminated. Buffalo and Boston had two weeks to prepare for the playoff, as their bye weeks were postponed from November 24 to December 22, due to the assassination of President Kennedy.

The game was played on Saturday, December 28, as the following day was the NFL championship game. On a slippery field at War Memorial Stadium in Buffalo with an inch of snow, visiting Boston led 16–0 at halftime and won 26–8. Quarterback Babe Parilli threw a touchdown pass in each half to fullback Larry Garron and Gino Cappelletti made four field goals for the Patriots. The Bills' sole score was a 93-yard touchdown pass play in the third quarter with a two-point conversion, which cut the lead to eight points. [4]

The game was not a sellout; the attendance of 30,127 was several thousand under Balboa Stadium's capacity. [11]

The Chargers' championship win 58 years ago is noted for being the only major sports title for the city of San Diego , the longest drought for a major American city. [13] [14] The Chargers played in San Diego through 2016, then returned to Los Angeles in 2017. The Patriots' first league championship came in the 2001 season in Super Bowl XXXVI.

The attendance in San Diego was nearly 8,000 lower than the previous year's game in Houston, but the players' shares were up slightly with increased television revenue. The winning Chargers players each made around $2,500, while the Patriots received about $1,700 each. [12] These shares were less than half of those for the NFL title game in 1963, at approximately $6,000 and $4,200 each. [15]

Keith Payson Lincoln was an American professional football player who was a running back for eight seasons in the American Football League (AFL). He played college football for the Washington State Cougars before choosing to play with the San Diego Chargers in the AFL over the established National Football League (NFL). Lincoln was a two-time All-AFL selection and a five-time AFL All-Star. A member of the Chargers Hall of Fame, he won an AFL championship with San Diego in 1963, when he was named the most valuable player (MVP) of the championship game. He had a stint with the Buffalo Bills before returning to San Diego and finishing his career.

The 1961 American Football League Championship Game was a rematch of the first AFL title game, between the Houston Oilers and the San Diego Chargers. It was played on December 24 at Balboa Stadium in San Diego, California, and the Oilers were three-point favorites.

The National Football League playoffs for the 2007 season began on January 5, 2008. The postseason tournament concluded with the New York Giants defeating the New England Patriots in Super Bowl XLII, 17–14, on February 3, at University of Phoenix Stadium in Glendale, Arizona.

The 1964 Season was the 5th season for the San Diego Chargers as a professional AFL franchise; the team failed to repeat as AFL champions after winning it in 1963 with a record of 11–3, and finished at 8–5–1. San Diego struggled at the start and finish of the season, but a six-game winning streak in the middle proved to be enough to win the AFL West, in a league where the two strongest teams were in the Eastern division. The Buffalo Bills, with former Charger Jack Kemp at quarterback, beat San Diego three times, including the AFL title game.

The 1963 San Diego Chargers season was the team's fourth in the American Football League. The team had gone 4–10 in 1962, but rebounded with an 11–3 record, winning the AFL West by one game over the Oakland Raiders, who were coached by former Chargers assistant Al Davis. San Diego scored the most points in the league and conceded the fewest. Their offense, led by veteran quarterback Tobin Rote, and featuring future Hall of Fame receiver Lance Alworth, gained more yards than any other team; Rote and Alworth were each named the league MVP, by the Associated Press and UPI respectively. 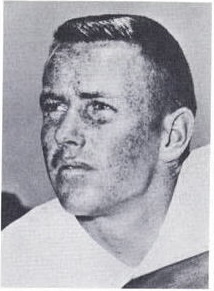 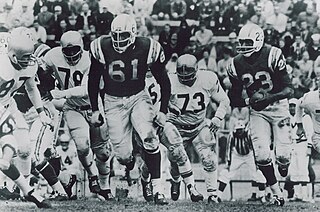 The 1961 San Diego Chargers season was the team's second in the American Football League. It was the Chargers' first season in San Diego, where the team remained until 2017. The Chargers clinched the Western Division by mid-November, winning their first eleven games and moving within four more victories of a perfect season. However, they lost form in December, managing only one victory in their final four games. Like the previous season, the Chargers' season ended with a loss to the Houston Oilers in the AFL championship game, this time 10–3 at Balboa Stadium in San Diego.

The 1963 Buffalo Bills season was the team’s fourth season in the American Football League. Winless after their first four games, Buffalo won seven of the final ten games, including the final two over the New York Jets, to finish with their second-consecutive 7–6–1 record, tied with the Boston Patriots atop the Eastern division. In this era, this required a tiebreaker playoff, the AFL's first. The Patriots and Bills had split their season series, each team winning at home, and the Bills were slight favorites as playoff hosts.