İzmir, often spelled Izmir in English, is a metropolitan city in the western extremity of Anatolia. It is the third most populous city in Turkey, after Istanbul and Ankara, and the second largest urban agglomeration on the Aegean Sea after Athens, Greece.

İzmir Atatürk Stadium is a multi-purpose stadium in İzmir, Turkey. It was named after the Turkish statesman Mustafa Kemal Atatürk. It is currently used mostly for football matches and occasionally for track and field events. The stadium holds 51,295 people. It was opened in 1971, and most recently refurbished in 2005. İzmir football teams Altay S.K. and Karşıyaka S.K. occasionally use the stadium for high attendance matches. İzmir Atatürk Stadium's running track has ten lanes.

The V Mediterranean Games – Tunis 1967, commonly known as the 1967 Mediterranean Games, were the 5th Mediterranean Games. The Games were held in Tunis, Tunisia over 9 days, from 8 to 17 September 1967, where 1,249 athletes from 11 countries participated. For the first time, women took part in the games. There were a total of 93 medal events from 14 different sports.

Nagui Asaad Youssef ناجى أسعد,, is a retired Egyptian athlete who represented Egypt in international athletics events in the 1970s and early 1980s in shot put and discus throw.

Syria (SYR) competed at the 1971 Mediterranean Games in Izmir, Turkey. The medal tally was 8.

Athletics at the 1971 Mediterranean Games were held in Izmir, Turkey.

Italy competed at the 1971 Mediterranean Games in Izmir, Turkey. 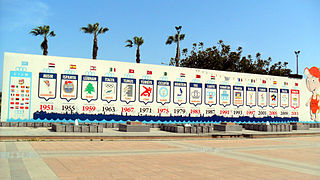 The Islamic Games was a multi-sport event for athletes from Muslim countries that was held from 26 September to 6 October 1980 in İzmir, Turkey. Although 42 nations were invited to compete at the competition, ultimately only ten nations took part, with around 700 athletes present. Among the nations competing at the tournament, only Algeria and Libya had sent delegations to the 1980 Summer Olympics in Moscow.

Algeria (ALG) competed at the 1971 Mediterranean Games in İzmir, Turkey.