In one of the biggest shocks in the history of the competition, Sunderland won 1–0 to become the first Second Division side to lift the Cup since West Bromwich Albion in 1931. It remains Sunderland's only major trophy since World War II. Sunderland's team were the only FA Cup winners of the 20th century not to field any full internationals,[ citation needed ] although some of their players were capped later.

Sunderland established their tactics immediately from the kick-off and refused to be intimidated by their more illustrious opponents, tackling fiercely and defiantly with an unremitting determination. Leeds looked anxious, lacking their usual composure. The match itself was decided by two crucial moments that would be talked about for years to come.

After 32 minutes Sunderland took the lead when Vic Halom chested down a corner from Billy Hughes. Assisted by Dave Watson between two defenders, the deflected high ball was controlled by Ian Porterfield who shot home from 12 yards. Leeds, shocked, battled back with predictable determination. Sunderland’s goalkeeper Jimmy Montgomery was outstanding, defying Leeds with a string of fine saves and preserving his team’s lead.

The turning point of the match came midway through the second half. Montgomery dived to palm away a close range header from Trevor Cherry. It fell into the path of Lorimer who blasted goalward from 10 yards but Montgomery managed to divert the ball on to the underside of the bar and Malone scrambled the ball clear. The save has been compared with that made by England’s Gordon Banks in the 1970 FIFA World Cup match against Brazil. [1]

The 1973 showpiece is the last FA Cup final to be played with an orange ball.

Robert Stokoe was an English footballer and manager who was able, almost uniquely, to transcend the traditional north-east animosity between the region's footballing rivals, Newcastle United and Sunderland. As a player, he won an FA Cup winner's medal with Newcastle in 1955 and in 1973 was manager of Sunderland in their famous victory over Leeds United.

Jimmy Montgomery BEM is an English retired footballer who played as a goalkeeper. He made a record 627 appearances for his hometown club Sunderland with 537 of these appearances being in the league, after joining the club as a youngster in 1960.

John Ian Porterfield was a Scottish professional footballer, and an experienced football coach who worked at both club and international level for almost 30 years. At the time of his death, he was the coach of the Armenian national team. 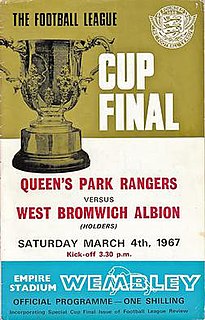 The 1978 FA Cup Final was an association football match between Arsenal and Ipswich Town on 6 May 1978 at the old Wembley Stadium, London. It was the final match of the 1977–78 FA Cup, the 97th season of the world's oldest football knockout competition, the FA Cup. Four-time winners Arsenal were appearing in their ninth final, whereas Ipswich Town were making their debut at Wembley and in their first FA Cup final. Each team had progressed through five rounds to reach the final. Ipswich had needed a replay in the fifth round to proceed past Bristol Rovers while Arsenal won all of their ties at the first time of asking and went into the final as clear favourites. 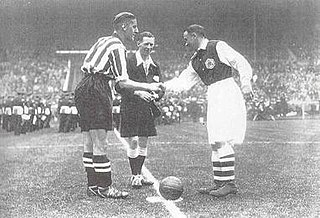 Kenneth Howard Burns (1931–2016) was an English football referee who officiated in the English Football League, and on the FIFA list. During his refereeing career he was based in Stourbridge, in the borough of Dudley, West Midlands, and was by profession a legal executive. He most notably refereed Sunderland AFC's famous 1–0 victory against Leeds United in the 1973 FA Cup Final which is still regarded as one of the biggest upsets in FA Cup history.

The 1972–73 FA Cup was the 92nd season of the world's oldest football cup competition, the Football Association Challenge Cup, commonly known as the FA Cup. Second Division Sunderland won the competition for the second time, beating Leeds United 1–0 in the final at Wembley, London with a goal from Ian Porterfield.

The 1936–37 FA Cup was the 62nd season of the world's oldest football cup competition, the Football Association Challenge Cup, commonly known as the FA Cup. Sunderland won the competition for the first time, beating Preston North End 3–1 in the final at Wembley.

The 1990 Football League Second Division play-off Final was an association football match which was played on 28 May 1990 at Wembley Stadium, London, between Sunderland and Swindon Town. The match was to determine the third and final team to gain promotion from the Football League Second Division, the second tier of English football, to the First Division. The top two teams of the 1989–90 Football League Second Division season gained automatic promotion to the First Division, while the clubs placed from third to sixth place in the table took part in play-off semi-finals; Swindon Town ended the season in fourth position, two places ahead of Sunderland. The winners of these semi-finals competed for the final place for the 1990–91 season in the First Division. Newcastle United and Blackburn Rovers were the losing semi-finalists. This was the first season that the play-off final was determined over a single match and the first to be held at Wembley.