The 1974 Australian federal election was held in Australia on 18 May 1974. All 127 seats in the House of Representatives and all 60 seats in the Senate were up for election, due to a double dissolution. The incumbent Labor Party led by Prime Minister Gough Whitlam defeated the opposition Liberal–Country coalition led by Billy Snedden.

Prior to the election the voting age had been reduced from 21 to 18 years. The election was held in conjunction with four referendum questions, none of which were carried.

Gough Whitlam had been an active prime minister since his party's victory in the 1972 election, and his government had pursued many socially progressive reforms and policies over its first term. However, it suffered through the 1973 oil crisis and the 1973–75 recession and received a hostile reception from the coalition/DLP-controlled Senate, with the last Senate election held in 1970.

Following an attempt by Whitlam to create an extra Senate vacancy in Queensland by appointing former Democratic Labor Party (DLP) Leader, Senator Vince Gair, as Ambassador to the Republic of Ireland, Snedden announced that the opposition would block the Government's supply bills in the Senate. After a great deal of legalistic argumentation in both houses about the Gair Affair, and justified by the failure of six (non-supply) bills to pass the Senate, Whitlam requested and was granted by Governor-General Sir Paul Hasluck a double dissolution under section 57 of the Constitution. The already-announced election date of 18 May was kept. The election focused on Whitlam's first one-and-a-half years in office and whether the Australian public was willing to continue with his reform agenda.

The Whitlam Government had been re-elected with their majority in the House of Representatives reduced from 9 to 5 seats, while they gained 5 seats in the Senate. The ALP and the coalition each won 29 seats in the 60 member Senate, with the balance of power held by Steele Hall of the Liberal Movement, and Michael Townley, a conservative independent. The Democratic Labor Party, which had been rendered obselete by the election of the Whitlam government in 1972, lost all five of its Senate seats. [1]

Al Grassby who served as Minister for Immigration in the Labor Whitlam Government lost his seat. Grassby's actions as immigration minister attracted criticism from anti-immigration groups, led by the Immigration Control Association, which targeted his electorate in a campaign at the May 1974 election. Partly as a result, Grassby was defeated by the National Party candidate, John Sullivan, by just 792 votes. Grassby and his supporters accused these groups of mounting a smear campaign against him. [2]

The re-elected Whitlam government's failure again to gain a majority in the Senate led to the 1974 joint sitting, Australia's only joint sitting, pursuant to section 57 of the Constitution. It was approved by the new governor-general Sir John Kerr after the bills were presented to the new parliament and were rejected a third time. It was held three months after the election, on 6–7 August, and it enabled the six bills that had been thrice rejected by the Senate to be passed. The Health Insurance bills were both passed on party lines, 95–92, the Petroleum and Minerals Authority legislation also passed on party lines, though with one Liberal Party member absent. Liberal Movement Senator Steele Hall supported the three Electoral bills, citing his experience as Liberal Premier of South Australia, where he had fought his own party in an effort to improve unequal electoral arrangements dubbed the Playmander. Northern Territory Country Party MP Sam Calder supported the Territory Senators legislation, though he opposed the ACT being given added representation. [3]

In February 1975, the independent senator Michael Townley joined the Liberal party. This gave the Coalition 30 out of 60 Senators, with 29 Labor and 1 Liberal Movement (Steele Hall).

Later in 1975, two Coalition premiers would break longstanding convention in the replacement of two ALP senators. Lionel Murphy, who had resigned to take up an appointment to the High Court, was replaced by independent Cleaver Bunton; and Bertie Milliner, who had died, was replaced by Albert Field, an ALP member who was opposed to Whitlam. Bunton (along with Hall) refused to vote against supply, but Field was prepared to. Field took his seat in the Senate as an Independent on 9 September. Due to a High Court challenge to his appointment, he was on leave from the Senate, unable to exercise a vote, from 1 October 1975, which reduced the number of sitting senators to 59. This gave the Coalition an effective majority, holding 30 of the 59, allowing them to block supply in the Senate to pave the way for the 1975 Australian constitutional crisis. 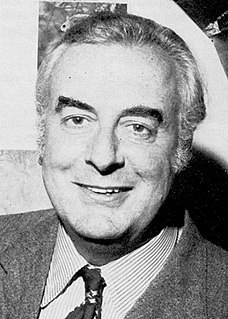 Edward Gough Whitlam was the 21st Prime Minister of Australia, serving from 1972 to 1975. The Leader of the Labor Party from 1967 to 1977, Whitlam led his party to power for the first time in 23 years at the 1972 election. He won the 1974 election before being controversially dismissed by the Governor-General of Australia, Sir John Kerr, at the climax of the 1975 Australian constitutional crisis. Whitlam remains the only Australian prime minister to have been removed from office in this manner.

The 1975 Australian constitutional crisis, also known simply as the Dismissal, has been described as the greatest political and constitutional crisis in Australian history. It culminated on 11 November 1975 with the dismissal from office of the Prime Minister, Gough Whitlam of the Australian Labor Party (ALP), by Governor-General Sir John Kerr, who then commissioned the Leader of the Opposition, Malcolm Fraser of the Liberal Party, as caretaker Prime Minister. 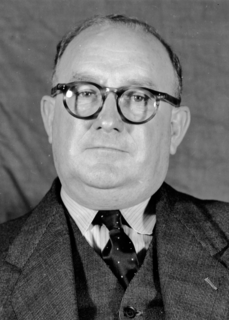 Vincent Clair Gair was an Australian politician. He served as Premier of Queensland from 1952 until 1957, when his stormy relations with the trade union movement saw him expelled from the Labor Party. He was elected to the Australian Senate and led the Democratic Labor Party from 1965 to 1973. In 1974 he was appointed Australian Ambassador to Ireland by the Whitlam government, which caused his expulsion from the DLP.

Albert Jaime Grassby, AM was an Australian politician who served as Minister for Immigration in the Labor Whitlam Government. He completed reforms in immigration and human rights, and is often known as the father of Australian "multiculturalism".

The Whitlam Government was the federal executive government of Australia led by Prime Minister Gough Whitlam. It was made up of members of the Australian Labor Party. The government commenced when Labor defeated the McMahon Government in the 1972 federal election after a record 23 years of Coalition government. It concluded, in historic circumstances, when it was dismissed by Governor-General Sir John Kerr as a result of the 1975 constitutional crisis and was succeeded by the Fraser Government. The Whitlam Government remains the only federal government in Australian history to be dismissed by either a monarch or viceregal representative. 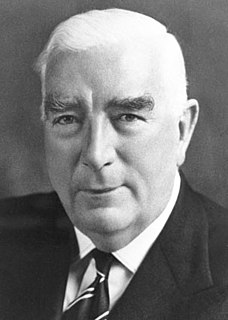 The 1963 Australian federal election was held in Australia on 30 November 1963. All 122 seats in the House of Representatives were up for election. The incumbent Liberal–Country coalition government, led by Prime Minister Robert Menzies, won an increased majority over the opposition Labor Party, led by Arthur Calwell.

Condon Bryan Byrne, Australian politician, was a Senator for the Australian Labor Party and later the Democratic Labor Party. Prior to entering politics he was private secretary to Vince Gair who was then Premier of Queensland. 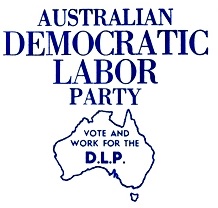 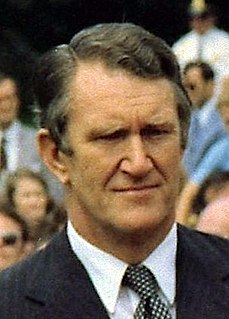 The 1977 Australian federal election was held in Australia on 10 December 1977. All 124 seats in the House of Representatives and 34 of the 64 seats in the Senate were up for election.

The 1972 Australian federal election was held in Australia on 2 December 1972. All 125 seats in the House of Representatives were up for election, as well as a single Senate seat in Queensland. The incumbent Liberal–Country coalition government, led by Prime Minister William McMahon, was defeated by the opposition Labor Party led by Gough Whitlam. Labor's victory ended 23 years of successive Coalition governments that began in 1949 and started the 3 year Whitlam Labor Government.

Bertie ("Bert") Richard Milliner was an Australian trade unionist, politician and Senator, representing the Australian Labor Party (ALP). He would have been a minor figure in Australia's political history but for the events that followed his sudden death. Those circumstances contributed to the 1975 Australian constitutional crisis, which culminated in the dismissal of the Prime Minister, Gough Whitlam, by the Governor-General, Sir John Kerr. 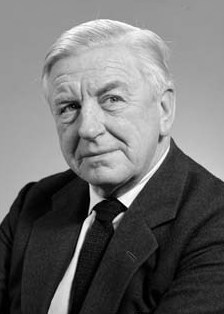 Sir Magnus Cameron Cormack KBE was an Australian politician who served as a Senator for Victoria from 1951 to 1953 and from 1962 to 1978, representing the Liberal Party. He was President of the Senate from 1971 to 1974.

This is a list of members of the Australian Senate from 1974 to 1975. The 18 May 1974 election was a double dissolution of both Houses, with all 127 seats in the House of Representatives, and all 60 seats in the Senate up for election. The incumbent Labor Party led by Prime Minister Gough Whitlam defeated the opposition Liberal Party led by Billy Snedden and their Coalition partner the Country Party led by Doug Anthony.

The Gair Affair was an episode in Australian political life in 1974, during the government led by the Labor Prime Minister Gough Whitlam. Whitlam offered the post of Ambassador to Ireland to a non-government senator from Queensland, Vince Gair, in the hope that this would improve Labor's chance of gaining a majority in the Senate at the forthcoming general election. Whitlam's plan was foiled by the Premier of Queensland, Joh Bjelke-Petersen, during what came to be known as "The Night of the Long Prawns", but the matter was overtaken by events when Whitlam decided to call a double dissolution election.

The Fraser Government was the federal executive government of Australia led by Prime Minister Malcolm Fraser. It was made up of members of a Liberal-Country party coalition in the Australian Parliament from November 1975 to March 1983. Initially appointed as a "caretaker" government following the dismissal of the Whitlam Government, Fraser won in a landslide at the resulting 1975 Australian federal election, and won substantial majorities at the subsequent 1977 and 1980 elections, before losing to the Bob Hawke-led Australian Labor Party in the 1983 election. 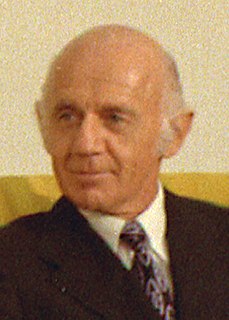