The 1983 TAME Boeing 737-200 crash was an aviation incident in which a Boeing 737-2V2 Advanced, operated by the Ecuadorian national airline TAME, which was flying on a domestic route from the now-closed Mariscal Sucre International Airport in Quito to Mariscal Lamar Airport in Cuenca, crashed into a hill during final approach just 1 mile (1.6 km; 0.87 nmi) from its final destination, killing all 119 people on board. [1]

The aircraft involved in the accident was a Boeing 737-2V2 Advanced, with Pratt & Whitney type JT8D-17 engines. It was manufactured in 1981 and made its first flight on June 11 of that year. When Boeing delivered it, it was registered as N8283V, but when it arrived in the TAME fleet in October of the same year, its registration changed to HC-BIG. The aircraft was named "Ciudad de Loja" upon its delivery to TAME. [2] [4] [5] [6] It was the only Boeing 737 ever operated by the airline. [7] The plane was piloted by captain Jorge Peña and an unnamed first officer. 103 people (95 passengers and all eight crew) came from Ecuador, 11 came from Colombia, and five from the United States. [8] [9] [10] [11] [12]

On the morning of 11 July 1983, the aircraft took off from Mariscal Sucre International Airport in Quito for a domestic flight to Mariscal Lamar Airport in Cuenca with 111 passengers and eight crew members. The aircraft encountered foggy conditions during the final approach to Mariscal Lamar Airport, but the weather conditions of that day were reported as clear. The crew contacted the Cuenca control tower for permission to land the plane, which was granted. [8] [11]

During the final few minutes of the flight, the pilots were distracted during a conversation (reportedly discussing labor problems in TAME) and didn't know that the plane was flying dangerously low towards a mountain. Also, at the same time, they were experimenting with some of the aircraft's controls and systems. [10]

Seconds before the plane hit the mountain and 1 mile (1.6 km; 0.87 nmi) from the airport, the Ground Proximity Warning System (GPWS) activated, announcing an imminent terrain collision and sounding an alarm. The captain and first officer attempted to climb clear of the mountain by applying full power on the engines and making a steep climb, but it was too late. The jetliner scraped the peak of Bashún Hill (which overlooks the runway of Marsical Lamar Airport), exploded, and slid down into a ravine; there were no survivors. [13]

Two minutes after the plane signal was lost from the radar screen, Cuenca air traffic control (ATC) declared an emergency. The following day, search aircraft and rescue teams arrived the plane's last known position. Because of the remoteness and the difficulty of access to the crash site, it took rescue personnel several hours to reach the site itself.[ citation needed ]

After initial fears of a possible sabotage were advanced by the civil aviation authorities [14] [15] after a radio station reported witnesses to a mid-air explosion. [16] [9] During the investigation, this was discarded due to lack of evidence. The civil authorities of aviation initiated an investigation, with cooperation of Boeing, Pratt & Whitney and the United States National Transportation Safety Board (NTSB).

The investigation results were presented several months later and concluded that pilot error was a direct cause the crash. Several factors were identified: training of the pilots was not properly delivered by TAME for the Boeing 737-2V2 Advanced, the crew was not fully familiar with the controls of the aircraft, and the crew was distracted while trying to locate the runway in heavy fog, as a consequence, the plane went below the minimum safe altitude in a mountainous region with the flight crew ignoring the voice commands of the proximity radar until seconds before impact.[ citation needed ]

TAME or TAME EP Linea Aerea del Ecuador was an airline founded in Ecuador in 1962. TAME was the flag carrier and the largest airline of Ecuador. TAME headquarters are in Quito, Pichincha Province and the main hub was Mariscal Sucre International Airport in Quito. The airline was formed by the Air Force of Ecuador. In 2011, it became a commercial entity and now provides domestic, international and charter flights. On May 20, 2020, the Ecuador government decided to cease all the operations and liquidate the airline.

Air Algérie SpA is the national airline of Algeria, with its head office in the Immeuble El-Djazair in Algiers. With flights operating from Houari Boumedienne Airport, Air Algérie operates scheduled international services to 39 destinations in 28 countries in Europe, North America, Africa, Asia, and the Middle East, as well as domestic services to 32 airports. The airline is a member of the International Air Transport Association, the Arab Air Carriers Organization, and of the African Airlines Association (AFRAA) since 1968. As of December 2013, Air Algérie was 100% owned by the government of Algeria.

This is a list of aviation-related events from 1977, This is the year of the second-deadliest air disaster in history, the Tenerife airport disaster. Here are the aviation events of 1977: 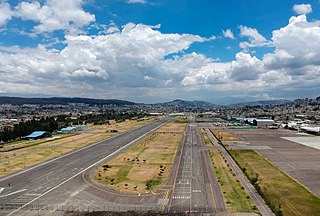 Mariscal Sucre International Airport(IATA: UIO, ICAO: SEQU) was the main international airport serving Quito, Pichincha Province, Ecuador. It was the busiest airport in Ecuador by passenger traffic, by aircraft movement and by cargo movement, and one of the busiest airports in South America. It was named after Venezuelan-born Antonio José de Sucre, a hero of Ecuadorian and Latin American independence. It began operations in 1960, and during its last years of operation, handled about 6.2 million passengers and 164,000 metric tons of freight per year. The airport, one of the highest in the world was located in the northern part of the city, in the Chaupicruz parish, within five minutes of Quito's financial center; the terminals were located at the intersection of Amazonas and La Prensa avenues. Mariscal Sucre International was the largest hub for TAME with an average of 50 daily departures.

SAETA was a privately held airline of Ecuador, which began operations in 1966. During its heyday in the 1990s, it flew to numerous destinations in North and South America from its base in Guayaquil. The collapse of Ecuador's economy in the late 1990s forced this airline to cease operations in February 2000. 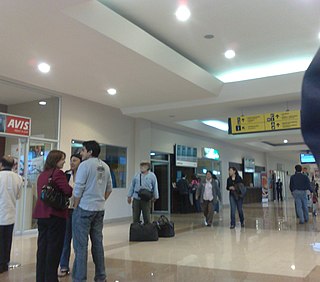 Mariscal Lamar International Airport is a high elevation airport serving Cuenca, the capital of the Azuay Province in Ecuador. It is named after the Peruvian military leader and politician José de la Mar, a native of Cuenca. 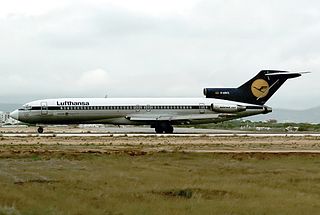 Air France Flight 422 was a scheduled flight on 20 April 1998 by Air France from Bogotá, Colombia, to Quito, Ecuador, covering the final leg of a flight from Paris to Bogotá, operated by TAME on behalf of Air France. The Boeing 727 was destroyed, killing all 53 people on board, when it crashed into the Eastern Hills of Bogotá because of foggy weather and low visibility after taking off from Bogotá's El Dorado International Airport. The plane was owned by TAME, the Ecuadorian airline, but was being operated on a wet-lease basis to Air France as the final leg of its flight from Paris.

SAN Ecuador is a defunct airline which was based in Guayaquil, Ecuador. It was the domestic branch of also defunct SAETA. Founded in 1964, it flew a fleet of DC-3, Vickers Viscount, Caravelle and later two Boeing 727-100 and one Boeing 727-200. SAN ceased operations in 1999. 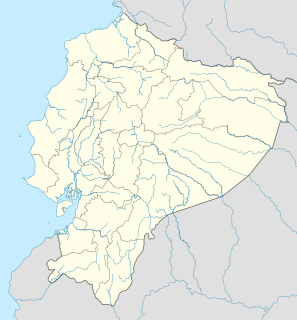 Ricaurte is a town and parish in Cuenca Canton, Azuay Province, Ecuador. The parish covers an area of 14.3 km² and according to the 2001 Ecuadorian census it had a population total of 14,006.

AIRES Flight 8250 was a domestic scheduled passenger flight that on 16 August 2010 crashed on landing at night in poor weather on the Colombian island of San Andrés, killing 2 of the 131 people on board. The aircraft, an AIRES-operated Boeing 737-700, was arriving from the Colombian capital Bogotá when it heavily touched down short of the runway, breaking up in three sections.

Cubana de Aviación Flight 389 (CU389/CUB389) was a scheduled domestic passenger flight, flying from Mariscal Sucre International Airport in Quito to Simón Bolívar International Airport in Guayaquil, operated by Cuban flag carrier Cubana de Aviación. On 29 August 1998, the aircraft operating the flight, a Tupolev Tu-154M overran the runway, smashing buildings and crashed into a soccer field in Quito while taking off from the airport. The aircraft burst into flames and 70 people on board were killed. A total of 10 people on the ground, including children, were killed. 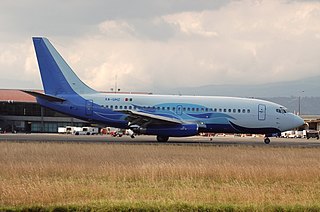 Cubana de Aviación Flight 972 was a scheduled domestic flight from José Martí International Airport, Havana, Cuba, to Frank País Airport in Holguín, Cuba. On May 18, 2018, the 39-year-old Boeing 737-201 Adv. operating the route crashed shortly after takeoff, near Santiago de las Vegas, 19 kilometres from Havana city centre. Of those on board, 112 died and one passenger survived with critical injuries. There were initially four survivors, but three of them later died at a local hospital. Most passengers on board were Cuban nationals, and the whole crew was Mexican.