The 1984 Entry Draft is noted for the unusually high number of future Hall of Famers picked, particularly in lower rounds. In addition to Mario Lemieux being taken first overall, Patrick Roy was chosen in the third round, Brett Hull in the sixth, and Luc Robitaille in the ninth. In addition, Lemieux, Gary Suter and Robitaille would all go on to win the Calder Memorial Trophy, Lemieux in 1985, Suter in 1986, and Robitaille in 1987, making this a rare draft in which multiple Rookie of the Year winners were produced.

The surprise at the time of the draft was Montreal's selection of Petr Svoboda at fifth-overall. As a player trained behind the Iron Curtain, very few people expected him to be available for selection in the draft, let alone be actually attending the draft and coming to the podium when his name was announced, as he had only recently defected to West Germany following the 1984 WJHC (only Serge Savard, the then-GM of the Canadiens, had been aware of Svoboda's defection).

In addition to Svoboda, of note is that Tom Glavine, playing centre in high school, who later became a star Major League Baseball pitcher with more than 300 career wins, as well as a 2014 inductee of the Baseball Hall of Fame was chosen in the fourth round (69th overall) by the Los Angeles Kings, ahead of notable players such as future Hall of Famers Brett Hull (117th overall), and Luc Robitaille (171st overall).

Below are listed the selections in the 1984 NHL Entry Draft. Club teams are located in North America unless otherwise noted.

Draftees based on nationality

Stephen Gregory Yzerman is a Canadian professional ice hockey executive and former player who spent his entire National Hockey League (NHL) playing career with the Detroit Red Wings and is a member of the Hockey Hall of Fame. After his retirement as a player, he served in the front office of the Red Wings, and then as general manager of the Tampa Bay Lightning, while also being executive director for Team Canada in two Olympics. He currently serves as the executive vice president and general manager of the Red Wings.

Brett Andrew Hull is a Canadian–American former ice hockey player and general manager, and currently an executive vice president of the St. Louis Blues of the National Hockey League (NHL). He played for the Calgary Flames, St. Louis Blues, Dallas Stars, Detroit Red Wings and Phoenix Coyotes between 1986 and 2005. His career total of 741 goals is the fourth highest in NHL history, and he is one of five players to score 50 goals in 50 games. He was a member of two Stanley Cup winning teams – 1999 with the Dallas Stars and 2002 with the Detroit Red Wings. In 2017 Hull was named one of the '100 Greatest NHL Players' in history. 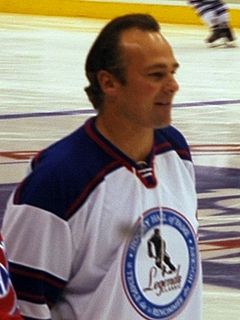 Dale Hawerchuk was a Canadian professional ice hockey player and coach. Drafted first overall by the Winnipeg Jets in the 1981 NHL Entry Draft, Hawerchuk played in the National Hockey League (NHL) for 16 seasons as a member of the Jets, Buffalo Sabres, St. Louis Blues and Philadelphia Flyers. He won the NHL's Calder Memorial Trophy as the league's Rookie of the Year in 1982 and was elected to the Hockey Hall of Fame in his second year of eligibility in 2001. Hawerchuk served as the head coach of the Barrie Colts of the Ontario Hockey League from 2010 to 2019.

Claude Percy Lemieux, is a Canadian former professional ice hockey player. He last played for the San Jose Sharks before announcing his retirement on July 8, 2009. He is one of only 11 players in Stanley Cup history to win the Cup with three or more different teams. His 80 career playoff goals are the ninth-most in NHL history, making him one of the best playoff performers in history. Lemieux is also a former president of the ECHL's Phoenix RoadRunners. He is also the father of Los Angeles Kings forward Brendan Lemieux. 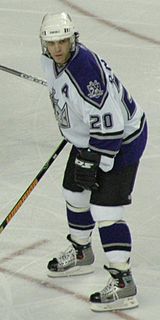 Luc Jean-Marie Robitaille is a Canadian–American professional ice hockey executive and former player. He currently serves as president of the Los Angeles Kings of the National Hockey League (NHL). 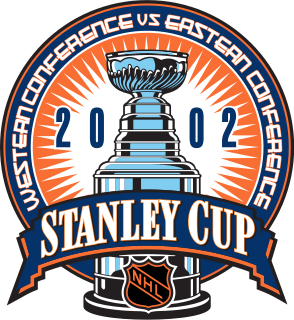 The 2002 Stanley Cup Finals was the championship series of the National Hockey League's (NHL) 2001–02 season, and the culmination of the 2002 Stanley Cup playoffs. It was contested by the Western Conference champion Detroit Red Wings and the Eastern Conference champion Carolina Hurricanes. It was Detroit's twenty-second appearance in the Finals, their previous appearance being a win in 1998. It was Carolina's first appearance in the Finals in franchise history. Detroit defeated Carolina in five games to win their tenth Stanley Cup championship in franchise history.

Garry Michael Galley is a Canadian broadcaster and former professional ice hockey player. Galley played in the National Hockey League from 1984 to 2001. Galley was a former co-host of the defunct "More On Sports" radio program on The Team 1200 in Ottawa, Ontario, and is a colour commentator on Hockey Night in Canada.

The 1975 NHL Amateur Draft was the 13th NHL Entry Draft. It was held at the NHL office in Montreal, Quebec. The two-time defending Stanley Cup champion Philadelphia Flyers made the most noise at the draft, trading Bill Clement, Don McLean, and the 18th overall pick to the Washington Capitals for the number one overall selection, which they used to select Mel Bridgman. Later in round nine the Flyers became the first NHL team to select a Soviet-born and trained player in the amateur draft, selecting Latvian Viktor Khatulev 160th overall.

Pat Brisson is a Canadian National Hockey League Players' Association (NHLPA) agent and co-head of the Hockey Division of Creative Artists Agency with partner J.P. Barry. He is also the father of the Vegas Golden Knights prospect Brendan Brisson.

The 1984–85 Los Angeles Kings season, was the Kings' 18th season in the National Hockey League. Following a fifth-place finish the previous season under three different coaches, Pat Quinn was hired as the new head coach of the Kings. In his first season, he returned them to the playoffs after a three-year absence with a 23-point improvement in the standings. But despite the goal scoring brilliance of Marcel Dionne and Bernie Nicholls, the Kings could not duplicate their Miracle on Manchester performance this time, losing to the Edmonton Oilers in three straight games in the Smythe Division semi-finals.

The 1976 NHL Amateur Draft was the 14th NHL Entry Draft. It was held at the NHL office in Montreal, Quebec, on June 1, 1976. It is notable as featuring one of the weakest first rounds in draft history, as only two players played more than 450 career NHL games. In 2002, Federko was elected into the Hockey Hall-of-Fame after playing fourteen seasons (1976–1990), with 13 of those with the St. Louis Blues. The Cleveland Barons drafted as the California Golden Seals and the Colorado Rockies took part as the Kansas City Scouts. The two franchises would relocate to their new cities on July 15 of that year.