Statistics of Japan Soccer League for the 1985–86 season.

Led by their star player Yasuhiko Okudera, who had returned to the club after successful periods in Europe, Furukawa Electric won a second title. Okudera became the first widely recognized professional Japanese player.

Sumitomo and ANA went back down as soon as they had come up, unable to get wins.

No relegation took place for a second wave of expansion that would bring the division's number of clubs to 16. 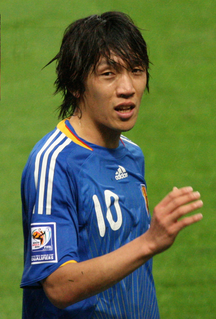 Shunsuke Nakamura is a Japanese professional footballer who plays as an attacking midfielder for Yokohama FC in J1 League. He is the only person to have been named J.League Most Valuable Player more than once, receiving the award in 2000 and 2013. He is well known for his vision, touch, bending shots and free kick-taking abilities; Steve Perryman once remarked that Nakamura "could open a tin of beans with his left foot".

Junichi Inamoto is a Japanese professional footballer who plays as a midfielder for SC Sagamihara. He played for Japan national team.

The 1911–12 season was the 41st season of competitive football in England. 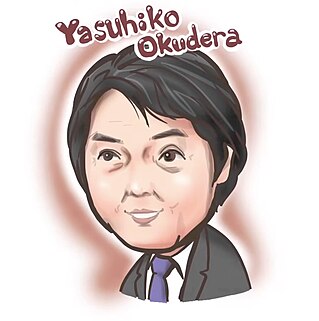 Yasuhiko Okudera is a former Japanese football player and manager. He is currently the president of J2 League club Yokohama FC and was formerly the president of English club Plymouth Argyle. Okudera was the first Japanese footballer to play professionally in Europe, as well as being the first Asian football player to score in the European Cup, while playing for Köln in the 1979 semi-final match against Nottingham Forest and made 32 appearances – scoring nine goals – with the Japanese national team.

The 1972 Copa Libertadores was the 13th edition of the Copa Libertadores, CONMEBOL's the annual club tournament. Independiente of Argentina defeated Universitario de Deportes of Peru in the finals, and became the second team in the tournament's history to win three title. They would go on and face the winner of the 1971–72 European Cup in the Intercontinental Cup.

The 1987 Asian Club Championship was the 7th edition of the annual Asian club football competition hosted by Asian Football Confederation. Several Asian clubs started the qualifying round in Fall of 1987.

In 2008, the Campeonato Brasileiro Série C, the third division of the Brazilian League, was contested by 64 clubs, four of which qualified to the Série B. For the second time in history, Atlético Goianiense were crowned Série C champions. Following them, former Série A champions Guarani were also promoted, along with Campinense and Duque de Caxias. The new, revamped 20-club round robin Série C in 2009, will be contested by the clubs which finished from 5th to 20th this season, plus the four relegated from Série B 2008.

Statistics of Japanese Regional Leagues in the 1971 season.

Satoko Okudera is a Japanese screenwriter. She is known for her screenplays in both the live-action and anime mediums. Her 1995 screenplay for Gakkō no kaidan was nominated for the Japan Academy Prize. She is best known for her collaborations with anime director Mamoru Hosoda.

The 2017 Japanese Regional Leagues were a competition between parallel association football leagues ranking at the bottom of the Japan Football League.