Despite all the hype surrounding Miami, Penn State's defense harassed and harried Heisman trophy winner Vinny Testaverde throughout the Fiesta Bowl. The Hurricanes committed seven turnovers, including five interceptions thrown by Testaverde – the last of which, in the end zone with 18 seconds left, won the game for the Nittany Lions.

Oklahoma and Michigan began the season at No. 1 and No. 2. A 28–16 defeat of Oklahoma by Miami on September 27 pushed the Hurricanes into the No. 1 ranking and ultimately proved the spoiler for the Sooners, who finished the 1986 season ranked first in all four major defensive statistical categories – a feat not to be duplicated until 2012, by Alabama. The Crimson Tide moved into the number 2 spot following the Sooners' loss. Probably the strongest case for Penn State was a defeat of the well-regarded, then-No. 2 ranked Alabama squad by a score of 23–3, at Tuscaloosa on October 26. [3] This pushed Penn State into the number two spot. Otherwise, both Miami and Penn State had a number of teams on their schedule that were not strong opponents. [4] Michigan defeated Iowa in a rematch of the previous season's No. 1 vs No. 2 game. Three games later, Michigan was number 2 and undefeated after Penn State fell in the rankings following a 17–15 close win to Maryland.

Arizona State Sun Devils quarterback Jeff Van Raaphorst threw five interceptions in a 21–21 tie with Washington State [5] ASU's 16–9 win over the UCLA Bruins in the Rose Bowl stadium on October 4 would later prove to be the deciding game in the conference. The Sun Devils beat both USC and UCLA in Los Angeles, the first Pacific-10 conference team to do so. The Sun Devils defeated outgoing coach Joe Kapp's California Golden Bears team 49–0. Kapp had unzipped his pants in front of the Seattle media following an embarrassing 50–18 loss against Washington on October 4. [5] The win over Cal, combined with the UCLA loss to Stanford, enabled the Sun Devils to clinch the Rose Bowl Berth on November 8. [5] The early clinching of the Rose Bowl bid for Arizona State began a scramble for all the Bowl games to confirm teams before the bids were to be extended on November 22.

The Michigan Wolverines football team began the season ranked number 2 in the nation. A No. 1 vs No. 2 matchup the previous season between Iowa and Michigan had decided the race for the 1986 Rose Bowl; in the 1986 rematch, the Wolverines defeated Iowa 20–17. Minnesota, a 25–point underdog to number two ranked Michigan, was regarded as being likely to provide an easy victory for the Wolverines in the November 15 game at Michigan Stadium in Ann Arbor; [6] the Gophers had not defeated the Wolverines since 1977. With two minutes to go, Michigan scored a touchdown to tie the game at 17. On the ensuing Minnesota possession, quarterback Rickey Foggie scrambled to put Chip Lohmiller in field goal position; Lohmiller connected for a 20–17 Gophers victory. [6] The Gophers took home the Little Brown Jug from Michigan for the first time since 1962. The Wolverines fell to No. 6 and then faced arch rival Ohio State for the right to play in the Rose Bowl. Jim Harbaugh guaranteed a Michigan Victory over Ohio State. "We don't care where we play the game", said the senior quarterback early in the week. "I hate to say it, but we could play it in the parking lot. We could play the game at 12 noon or midnight. We're going to be jacked up." [7] The Wolverines won 26–24.

Arkansas' victory over Texas was the Razorbacks' first win in Austin since 1966.

With Arizona State having clinched the Rose Bowl berth on November 8, and the Fiesta Bowl and Citrus Bowl scrambling to bid for the No. 1 Miami (Florida) vs. No. 2 Penn State Game, the Cotton Bowl struck an agreement to take the loser of the Michigan-Ohio State game. [7] All the bowl games attempted to line up participants before the official bids were extended on November 22. The Sugar Bowl agreed to take the loser of the Oklahoma-Nebraska game to match the SEC winner, and the Orange Bowl agreed to take the second place SWC team to match the Big 8 winner. The Citrus Bowl, which moved to January 1, got a second place SEC team in Auburn, and, what they hoped would be a good matchup, in 7–2 USC. The Trojans would lose to UCLA and Notre Dame after they were invited.

The phrase "Game of the Century" is a superlative that was applied to several college football contests played in the 20th century, the first full century of college football in the United States. It is a subjective term applied by sportswriters to describe the most notable games of the period.

The 1987 Fiesta Bowl was a college football bowl game that served as the final game of the 1986 NCAA Division I-A football season. Part of the 1986–87 bowl game season, the 1987 Fiesta Bowl also served as the National Championship Game, between the No. 1 ranked Miami Hurricanes, and the No. 2 Penn State Nittany Lions. It was the bowl's 16th edition, played annually since 1971 at Sun Devil Stadium in Tempe, Arizona. 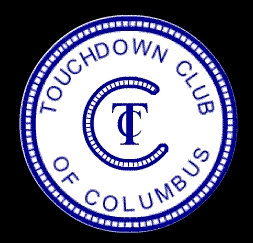 The Touchdown Club of Columbus was founded in Columbus, Ohio, in 1956 by Sam B. Nicola at the request of state auditor James A. Rhodes, who later became governor of the state. Nicola served as the club's president until his death in 1993. More than a decade later, his son Sam Nicola Jr. took over the Touchdown Club. On January 22, 2020 the President of the Touchdown Club of Columbus, Curt Boster, announced on the club's Facebook page the cancellation of the awards citing difficulty of maintainiting the event without a title sponsor.