Widnes came into the World Club Challenge having won two straight Stones Bitter Premierships. Coach Doug Laughton's team had won many admirers throughout England for their free-flowing, attacking style of rugby. At this time player poaching from rugby union was at a level not seen in decades, and the Chemics benefited from a board flush with cash and a coach with a keen eye for talent. Three members of their famed back division all came from the amateur code. Alan Tait started in union for Scotland but had grown up around league as his father played for Workington Town in the Borders. Jonathan Davies cited a need to provide for a young family and heavy pressure as Wales five-eighth as his motivation for accepting a then-record £230,000 signing fee. Finally Martin Offiah desired to prove doubters wrong, whether they be Southern union power-brokers put off by his unapologetic blackness or St. Helens scouts who passed him over, believing he was "an uncoordinated clown". Combining with home-grown talents like Andy Currier, the Hulme brothers and Tony Myler, the Chemics scored an eye-popping 726 points in the 1988-89 league, winning the title over Wigan by three points.[ citation needed ]

The 1989 NSWRL season was the 8th in the history of Australian club the Canberra Raiders. Coached by Tim Sheens and captained by Australian international centre Mal Meninga, the Raiders finished the minor rounds in 4th spot. They then won through to their second ever Grand Final (after playing in the 1987 game) where they made history by not only being the first team to win the premiership from 4th spot or lower after defeating Balmain in the Grand Final, but also by becoming the first non-Sydney team to win the premiership in its history dating back to 1908.[ citation needed ]

The match was played on Wednesday, 4 October at Old Trafford, Manchester. A crowd of 30,786 [2] saw an all-action game of two halves, with a Mal Meninga-inspired Canberra opening up a 12-0 lead by playing a brand of rugby that BBC commentator Ray French described as "like basketball". However Widnes' offload game would bring them back into the match, with tries by Offiah and Paul Hulme both coming as a result of good late passes to make it 12-8 at the interval. The match turned in the second half when Jonathan Davies was clothes-lined across the chin by Laurie Daley in the act of scoring a try: Daley could call himself lucky to only be given a sin-bin by the French referee. Widnes would consolidate the man-advantage by crossing the Stretford End try-line twice courtesy of Offiah and Eyres, adding a Darren Wright try as insurance while Steve Walters would got a valedictory four-pointer for the Australians. [3] David Hulme was named man-of-the-match.

The Canberra Raiders are an Australian professional rugby league football club based in the national capital city of Canberra, Australian Capital Territory. They have competed in Australasia's elite rugby league competition, the National Rugby League (NRL) premiership since 1982. Over this period the club has won 3 premierships,. They have not won a grand final since 1994 and last played in a grand final in 2019. They have received 1 wooden spoon and had a total of 15 of its players selected to play for the Australia national rugby league team. The Raiders' current home ground is Canberra Stadium in Bruce, Australian Capital Territory. Previously, the team played home matches at Seiffert Oval in Queanbeyan, New South Wales, with the move to the AIS Stadium in Bruce taking place in 1990. The official symbol for the Canberra Raiders is the Viking. The Viking, also a mascot at Raiders' games, is known as Victor the Viking. 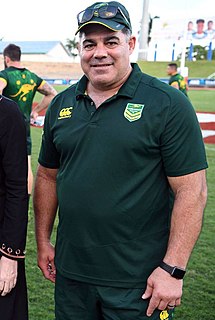 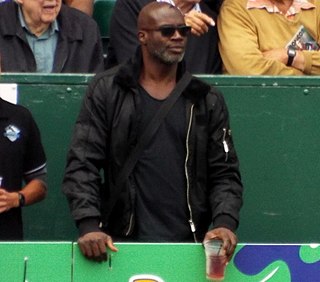 Martin Nwokocha Offiah MBE is an English former professional rugby league and rugby union footballer who played in the 1980s, 1990s and 2000s. Offiah was inducted into the Rugby League Hall of Fame in 2013. He scored over 500 tries during his rugby league career, making him the third highest try scorer of all time, and now features in a statue of great rugby league players outside Wembley Stadium.

Laurie William Daley AM, also known by the nicknames of "Lozza" and "Loz", is an Australian professional rugby league football coach and a former player who played as a centre and five-eighth in the 1980s and 1990s.

Tim Sheens is a Rugby League coach who is currently in charge of the Widnes Vikings in the Betfred Championship. He is an Australian professional rugby league football coach and former player. Head Coach of the Australia national team between 2009 and 2015, he has also been the head coach of National Rugby League (NRL) clubs, the Penrith Panthers, the Canberra Raiders, the North Queensland Cowboys and the Wests Tigers. As a player, Sheens was a prop forward with Sydney's Penrith club in the 1970s and 1980s before he retired and became their coach. 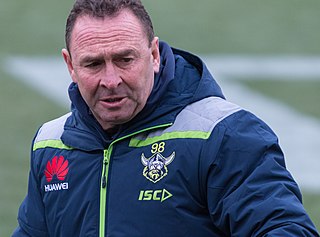 Seiffert Oval is an enclosed rectangular playing field in Queanbeyan, New South Wales. It has a grass playing surface and an official capacity of 15,000, 1,500 of which is seated capacity in the grandstand. The oval boasts lighting, toilets, kiosk, a food outlet, home and away change rooms and car parking facilities. The oval has been used for Rugby league, Soccer and Rugby Union and is currently the home ground for the Queanbeyan Blues.

Michael David O'Connor is an Australian former rugby league and rugby union footballer who represented Australia in both codes. He played for the Wallabies in 13 Tests from 1979 to 1982 and then the Kangaroos in 17 Tests from 1985 to 1990. O'Connor played club football in the NSWRL Premiership for the St. George Dragons from 1983 until 1986, and later the Manly-Warringah Sea Eagles from 1987 until his retirement at the end of 1992, becoming captain of Manly in 1990, as well as winning the 1987 Winfield Cup with the Sea Eagles.

The 1994 Kangaroo Tour was the 18th and last Kangaroo Tour played in the conventional format, where the Australia national rugby league team played a number of matches against British and French clubs or provincial outfits, in additions to the Test matches. The outbreak of the Super League war in early 1995 meant that the next Kangaroo tour, set for 1998, never eventuated; although shortened, test only tours were staged in 2001 and 2003.

Gary Belcher is an Australian rugby league football commentator and former player. An Australian international and Queensland State of Origin representative, he played club football in the Brisbane Rugby League premiership for the Souths Magpies and in the NSWRL Premiership for the Canberra Raiders. Belcher's position of choice was fullback.

The 1994 NSWRL season was the eighty-seventh season of professional rugby league football in Australia. Sixteen clubs competed for the J J Giltinan Shield during the season, which culminated in a grand final match for the Winfield Cup trophy between the Canberra Raiders and the Canterbury-Bankstown Bulldogs.

The 1991 NSWRL season was the eighty-fourth season of professional rugby league football in Australia. This year the New South Wales Rugby League experimented with a draft system for the first time. Sixteen clubs competed for the J J Giltinan Shield and Winfield Cup premiership during the season, which culminated in a replay of the previous year's grand final between the Canberra Raiders and the Penrith Panthers.

The 1990 New South Wales Rugby League season was the eighty-third season of professional rugby league football in Australia. Sixteen clubs competed for the J J Giltinan Shield and Winfield Cup during the premiership season, which culminated in a grand final between the previous season's premiers, the Canberra Raiders and the Penrith Panthers, who were making their grand final debut.

The 1987 NSWRL season was the 80th season of professional rugby league football in Australia. Thirteen clubs competed for the New South Wales Rugby League premiership's J J Giltinan Shield and Winfield Cup during the season, which culminated in the grand final between the Manly-Warringah Sea Eagles and the Canberra Raiders who were the first club ever from outside Sydney to appear in a premiership decider. This season, NSWRL teams also competed for the 1987 National Panasonic Cup.

Dean Lance is an Australian former professional rugby league footballer and coach, and current football manager at the North Queensland Cowboys of the NRL. He played in the New South Wales Rugby Football League premiership in the 1980s for the Newtown and Canberra clubs, captaining the Raiders for almost 5 years and winning two premierships with them. After playing he coached Super League clubs in Australia and in England.

The 1987 Manly-Warringah Sea Eagles season was the 41st in the club's history since their entry into the then New South Wales Rugby Football League premiership in 1947.