The 1992 European Cup Winners' Cup Final was a football match contested between Werder Bremen of Germany (who qualified for the tournament through the West German berth) and Monaco of France. It was the final match of the 1991–92 European Cup Winners' Cup and the 32nd European Cup Winners' Cup final. The final was held at Estádio da Luz in Lisbon. The attendance of 16,000 in a stadium which, at the time, had a capacity of around 130,000 meant that this was one of the most sparsely-attended UEFA finals of all time, both in actual and relative terms. Bremen won the match 2–0 thanks to goals of Klaus Allofs and Wynton Rufer.

The 2004 UEFA European Football Championship, commonly referred to as Euro 2004, was the 12th edition of the UEFA European Championship, a quadrennial football competition contested by the men's national teams of UEFA member associations. The final tournament was hosted for the first time in Portugal, from 12 June to 4 July 2004. A total of 31 matches were played in ten venues across eight cities – Aveiro, Braga, Coimbra, Guimarães, Faro/Loulé, Leiria, Lisbon, and Porto.

The knockout stage of UEFA Euro 2004 was a single-elimination tournament involving the eight teams that qualified from the group stage of the tournament. There were three rounds of matches, with each round eliminating half of the teams entering that round, culminating in the final to decide the champions. The knockout stage began with the quarter-finals on 24 June and ended with the final on 4 July 2004 at the Estádio da Luz in Lisbon. Greece won the tournament with a 1–0 victory over the host nation Portugal. 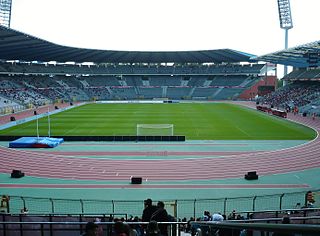 The 1965–66 season of the European Cup football club tournament was won by Real Madrid, winners of the first five European Cups from 1956 to 1960, for the sixth time in a close final against Partizan. Real Madrid eliminated title-holders Internazionale in the semi-finals. 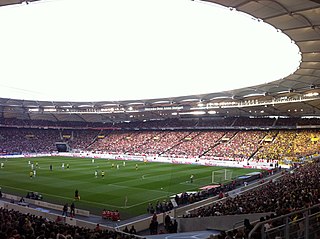 The 1987–88 European Cup was the 33rd season of the European Cup club football tournament. The competition was won for the first time by PSV Eindhoven, who defeated two-time winners Benfica in the final at Neckarstadion in Stuttgart. PSV became the first Dutch team to win the title in 15 years. They also set a record by winning only three matches on their route to the Cup, including no wins from the quarter-final onwards.

The 1980–81 season of the European Cup Winners' Cup was won by Dinamo Tbilisi in the final against Carl Zeiss Jena. Dinamo Tbilisi's side defeated English Second Division side West Ham United away before beating Carl Zeiss Jena in a final watched by 4,750 people in Düsseldorf. This win was the high point of the Georgian side and is still the club's greatest achievement.

The 1995–96 UEFA Cup was the 25th season of Europe's then-tertiary club football tournament organised by UEFA. It was won by German club Bayern Munich on aggregate over Bordeaux of France. Girondins de Bordeaux went to the finals all the way from the 1995 UEFA Intertoto Cup, its first season, being the only Intertoto Cup entrant to reach this far of the UEFA Cup. With this victory, Bayern became the third club to have won all three major European trophies. The finals itself was the only UEFA Cup final during the 1990s to not feature any Italian sides.

The 1991–92 season of the European Cup Winners' Cup was won by Werder Bremen in the final against Monaco. Both were first-time finalists in the competition.

The 1982–83 UEFA Cup was the 12th edition of the UEFA Cup. It was won by Belgian club Anderlecht on 2–1 aggregate over Portuguese club Benfica. 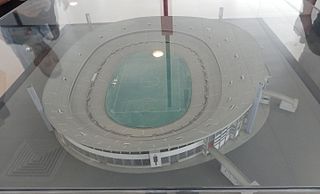 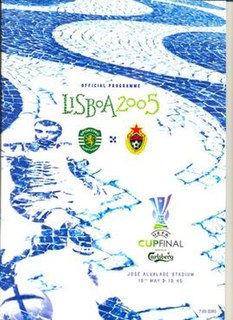 The 2005 UEFA Cup Final was the final match of the 2004–05 UEFA Cup, the 34th season of the UEFA Cup, UEFA's second-tier club football tournament. The match was contested by Sporting CP and CSKA Moscow; CSKA won the match 3–1. Sporting CP opened the scoring in the first half from full-back Rogério, before Aleksei Berezutskiy equalised in the second half. Yuri Zhirkov would give the Russian side the lead nine minutes after CSKA's equalising goal, and the Moscow outfit would close out the scoring 15 minutes from the end after a quick CSKA counterattack saw Vágner Love become the youngest player to score in a UEFA Cup final at the age of 20 years, 341 days, firing the ball past Sporting goalkeeper Ricardo to give the Russian side a first UEFA Cup trophy.

The 1992 European Super Cup was the 17th edition of the European Super Cup, an annual football match organized by UEFA and contested by the winners of the previous season's European Cup and Cup Winners' Cup competitions. It was played between Barcelona and SV Werder Bremen, with Barcelona winning 3–2 on aggregate.

The knockout phase of the 2009–10 UEFA Europa League began on 18 February, and concluded with the final at the Volksparkstadion in Hamburg, Germany on 12 May 2010. The knockout phase involved the 24 teams that finished in the top two in each group in the group stage and the eight teams that finished in third place in the UEFA Champions League group stage. 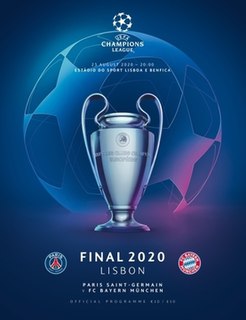 The 2020 UEFA Champions League Final was the final match of the 2019–20 UEFA Champions League, the 65th season of Europe's premier club football tournament organised by UEFA, and the 28th season since it was renamed from the European Champion Clubs' Cup to the UEFA Champions League. It was played on 23 August 2020 at the Estádio da Luz in Lisbon, Portugal, between French club Paris Saint-Germain, in their first European Cup final, and German club Bayern Munich. The match was held behind closed doors due to the COVID-19 pandemic in Europe.

In September 2018, the UEFA Nations League starring all European nations officially commenced. This competition has been created to make the international breaks more competitive and interesting and remove as much friendly matches as possible. The teams are divided into four leagues of four groups, from League A to League D. The winners of each group from League A get to play the Finals, constituted of the semi-finals, a third-place play-off, and the final.