No final was played as Instant-Dict granted the champion in both stages, and automatically became the overall champion. The runner-up in the Champion Playoff, South China, was awarded the overall runners-up. 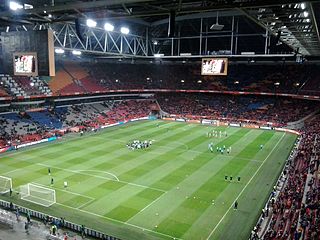 The 1997–98 UEFA Champions League was the 43rd season of the UEFA Champions League, UEFA's premier club football tournament, and the sixth since its re-branding from the "European Champion Clubs' Cup" or "European Cup". The tournament was won by Real Madrid, winning for the first time in 32 years, beating 1–0 Juventus who were playing in a third consecutive final. It started a run of three victories in five seasons for the Spanish club.

The 2000 season of the Torneo Descentralizado was the 85th season of the top category of Peruvian football (soccer). It was played by 12 teams. The national champion was Universitario.

The 1996–97 Serie A title was won by Juventus, under head coach Marcello Lippi. Cagliari, Perugia, Hellas Verona and Reggiana were relegated.

The 1997–98 Vyshcha Liha season was the 7th since its establishment. FC Dynamo Kyiv were the defending champions.

1997 Belarusian Premier League was the seventh season of top-tier football in Belarus. It started on April 11 and ended on November 11, 1997. MPKC Mozyr were the defending champions.

The 1997–98 Croatian First Football League was the seventh season of the Croatian top-level football league since its establishment.

The 1997–98 Macedonian First League was the 6th season of the Macedonian First Football League, the highest football league of Macedonia. The first matches of the season were played on 10 August 1997 and the last on 31 May 1998. Sileks defended their championship title, having won their third title in a row.

The 1997–98 Meistriliiga was the seventh season of the Meistriliiga, Estonia's premier football league. Flora won their third title.

The 1997–98 Primeira Divisão was the 64th edition of top flight of Portuguese football. It started on 25 August 1997 with a match between Varzim and Porto, and ended on 17 May 1998. The league was contested by 18 clubs with Porto as the defending champions.

The 2006–07 Irish Premier League was the fourth season of Northern Ireland's national football league in this format since its inception in 2003, and the 106th season of Irish league football overall.

The 1998–99 Slovak Superliga was the sixth season of first-tier football league in Slovakia, since its establishment in 1993. This season started on 1 August 1998 and ended on 29 May 1999. 1. FC Košice are the defending champions.

The 1997–98 Scottish First Division was won by Dundee who were promoted 5 points ahead of runner up Falkirk.

The 1997–98 Southern Football League season was the 95th in the history of the league, an English football competition.

The 1997–98 season was the 83rd season of the Isthmian League, which is an English football competition featuring semi-professional and amateur clubs from London, East and South East England. The league consisted of four divisions.

The 1997–98 season was the 87th season in Hajduk Split’s history and their seventh in the Prva HNL. Their 2nd place finish in the 1996–97 season meant it was their 7th successive season playing in the Prva HNL.