1998 J.League Cup Final was the 6th final of the J.League Cup competition. The final was played at National Stadium in Tokyo on July19, 1998. Júbilo Iwata won the championship. [1]

The J.League Cup is a Japanese football (soccer) competition organized by J.League. It is the oldest professional domestic football competition in Japan. It has been sponsored by Yamazaki Biscuits of Yamazaki Baking since its inception in 1992. It is also known as the J. League YBC Levain Cup or Levain Cup. It was known as the Yamazaki Nabisco Cup or Nabisco Cup until August 2016. 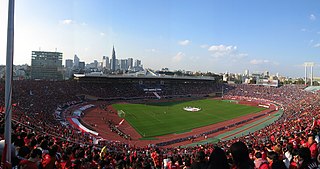 National Stadium was a multi-purpose stadium in Kasumigaoka, Shinjuku, Tokyo, Japan. The stadium served as the main stadium for the opening and closing ceremonies, as well as being the venue for track and field events at the 1964 Summer Olympics. The Japan national football team's home matches and major football club cup finals were held at the stadium. The stadium's official capacity was 57,363, but the real capacity was only 48,000 seats.

The original Wembley Stadium was a football stadium in Wembley Park, London, which stood on the same site now occupied by its successor, the new Wembley Stadium. The demolition in 2003 of its famous Twin Towers upset many people worldwide. Debris from the stadium was used to make the Northala Fields in Northolt, London. 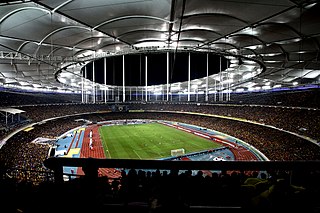 The Bukit Jalil National Stadium in Bukit Jalil, located in the National Sports Complex to the south of the city centre of Malaysia's capital city, Kuala Lumpur, all-seater multi-purpose stadium and the home ground of the Malaysian national football team. With a capacity of 87,411, it is the largest in Southeast Asia and the eighth largest football stadium in the world. 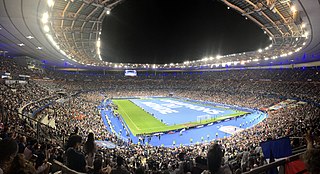 Stade de France is the national stadium of France, located just north of Paris in the commune of Saint-Denis. Its seating capacity of 80,698 makes it the eighth-largest stadium in Europe. The stadium is used by the France national football team and French rugby union team for international competition. The Stadium is also the tenth-largest stadium in the world, and the largest in Europe for track and field events, seating 78,338 in that configuration. Despite that, the stadium's running track is mostly hidden under the football pitch. The European Athletics Championships will be held there in August 2020. Originally built for the 1998 FIFA World Cup, the stadium's name was recommended by Michel Platini, head of the organising committee. On 12 July 1998, France defeated Brazil 3–0 in the 1998 FIFA World Cup Final contested at the stadium. It will host the opening and closing ceremonies and the athletics events at the 2024 Summer Olympics. It will also host matches for the 2023 Rugby World Cup. 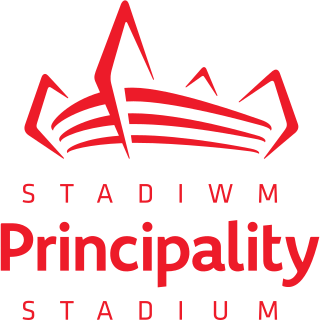 The Millennium Stadium, since 2016 named for sponsorship purposes as the Principality Stadium, is the national stadium of Wales, located in Cardiff. It is the home of the Wales national rugby union team and has also staged games of the Wales national football team. Initially built to host the 1999 Rugby World Cup, it has gone on to host many other large-scale events, such as the Tsunami Relief concert, the Super Special Stage of Wales Rally Great Britain, the Speedway Grand Prix of Great Britain and various music concerts. It also hosted six FA Cup finals and several other high-profile football fixtures while Wembley Stadium was being redeveloped.

Gamba Osaka is a Japanese professional association football club, currently playing in the J1 League. The team's name Gamba comes from the Italian word "gamba" meaning "leg" and the Japanese ganbaru (頑張る), meaning "to do your best" or "to stand firm". Located in Suita, Osaka, the team's home stadium is Suita City Football Stadium.

Dolphins FC was a Nigerian football team based in Port Harcourt.

The J.League Cup 2003, officially the Yamasaki Nabisco Cup 2003, was the 1st edition of Japan soccer league cup tournament and the 11th edition under the current J.League Cup format. The championship started on March 8, and finished on November 3, 2003.

The J. League Cup 2004, officially the Yamasaki Nabisco Cup 2004, was the 2nd edition of Japan soccer league cup tournament and the 12th edition under the current J. League Cup format. The championship started on March 27, and finished on November 3, 2004.

The 2005 J.League Cup, officially the 2005 Yamazaki Nabisco Cup, was the 3rd edition of Japan association football league cup tournament and the 13th edition under the current J.League Cup format. The championship started on March 19, and finished on November 5, 2005.

The 2015 J. League Cup, also known as the 2015 Yamazaki Nabisco Cup for sponsoring purposes, is the 40th edition of the most prestigious Japanese soccer league cup tournament and the 23rd edition under the current J. League Cup format.