The European Long Course Championships 1999 were a swimming competition held in Istanbul, Turkey from Monday 26 July to Sunday 1 August, in the 50 m pool of the Ataköy Olympic Pool Stadium. The 24th edition of the event was organised by the LEN.

Alongside swimming (long course), the aquatics disciplines of diving, synchronised swimming and open water swimming were held. Water polo was no longer part of the LEN European Aquatics Championships from 1999 and separate European Water Polo Championship was held in Florence, Italy.

For the first time, the 50 m backstroke, breaststroke and butterfly were contested.

LEN is the European governing body for aquatic sports affiliated to FINA — it is the Continental Association for Europe. It was formally organized in 1927 in Bologna, Italy, and since 2015 is headquartered in Nyon. 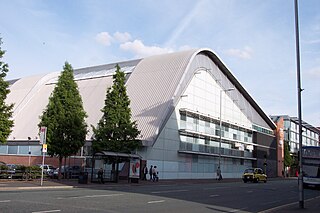 The European LC Championships 1995 in aquatics were staged in Vienna, Austria from 22–27 August. The competition, organised by the LEN, was held in a temporary pool in the Prater Stadium. The aquatics championships featured contests in swimming, open water swimming, diving, synchronized swimming and water polo. It was the third time the European Aquatics Championships were held in Vienna, after 1950 and 1974.

The 1997 LEN European Aquatics Championships were held in Seville, Spain from Tuesday 19 August to Sunday 24 August, in the 50 m pool of the Centro Deportivo San Pablo. The 23rd edition of the event was organised by the LEN. Besides swimming there were titles contested in open water swimming, diving, synchronized swimming (women) and – for the last time – water polo.

The 1993 European Aquatics Championships were held in Sheffield, United Kingdom from Tuesday 3 August to Sunday 8 August, in the 50 m pool of the Ponds Forge International Sports Centre. The 21st edition of the event was organised by the LEN.

The 2009 European Short Course Swimming Championships was held in Istanbul, Turkey, from Thursday 10 to Sunday 13 December 2009. A temporary swimming pool was built within the Abdi İpekçi Arena.

The Nautical Club of Vouliagmeni, or "NOV" is a major aquatic sports club, founded by local sportsmen in 1937 in the seaside resort of Vouliagmeni, south of Athens city centre, Greece. The club is located on the eastern edge of the Mikro Kavouri peninsula, adjacent to the Astir Palace Hotel and overlooking the bay, town and lake of Vouliagmeni.

The French Swimming Federation is a French law association of 1901, founded in February 1919, grouping the sports swimming clubs, open water swimming, synchronized swimming, diving and French water polo, which organizes the national competitions and the selection of French teams. In 2017, the Federation has 316,905 members. The FFN is a member of the European Swimming League (LEN) and the International Swimming Federation (Fina). Since April 2017, the FFN is chaired by Gilles Sezionale.

The Debrecen Swimming Pool Complex is an aquatics venue in Debrecen, Hungary. The facility features a competitive long course pool, a warm up pool, a training pool, Jacuzzi, sauna and an outdoor thermal bath with a water temperature of 34–36 °C. The 50 metres long course pool can be reduced to 33 metres or 25 metres by a mobile wall, making it available for short course events.

The Turkish Swimming Federation is the governing body of the five aquatic sports, namely swimming, diving, synchronized swimming, water polo and open water swimming in Turkey. It was founded in 1957. The Turkish organization is member of the European Swimming League (LEN), the International Swimming Federation (FINA) and Turkish Olympic Committee. The TYF is based in Ankara and its current chairman is Associate Prof. Dr. Ahmet Mazhar Bozdoğan.