2001 Emperor's Cup Final was the 81st final of the Emperor's Cup competition. The final was played at National Stadium in Tokyo on January 1, 2002. Shimizu S-Pulse won the championship. [1]

Alessandro Santos, often known as Alex, is a former footballer who was born in Brazil and became a Japanese citizen who made 82 appearances for the Japan national team. 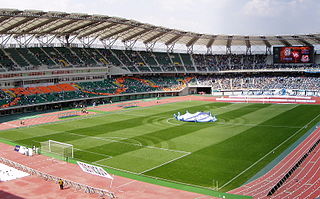 Yuichiro Nagai is a Japanese football player. He played for Japan national team.

Shimizu S-Pulse has spent 14 seasons in the top flight of Japanese football, the J. League. During those seasons, the club has been quite successful in the domestic cup competitions, winning the Emperor's Cup, the J. League Cup, the Asian Cup Winners Cup and the Japanese Super Cup twice. The club has also reached five other cup finals.

Kenta Hasegawa is a former Japanese football player and manager. He played for the Japan national team.

Yohei Nishibe is a Japanese football player who plays for Shimizu S-Pulse.

Koji Gyotoku is a former Japanese football player and manager. He is the current head coach of C-League side Bati Youth

1924 Emperor's Cup Final was the 4th final of the Emperor's Cup competition. The final was played at Meiji Jingu Gaien Stadium in Tokyo on October 31, 1924. Rijo Shukyu-Dan won the championship.

1983 Emperor's Cup Final was the 63rd final of the Emperor's Cup competition. The final was played at National Stadium in Tokyo on January 1, 1984. Nissan Motors won the championship.

1998 Emperor's Cup Final was the 78th final of the Emperor's Cup competition. The final was played at National Stadium in Tokyo on January 1, 1999. Yokohama Flügels won the championship.

2000 Emperor's Cup Final was the 80th final of the Emperor's Cup competition. The final was played at National Stadium in Tokyo on January 1, 2001. Kashima Antlers won the championship.

The 2019 Emperor's Cup was the 99th edition of the annual Japanese national football cup tournament. The tournament began on 25 May and ended with the final on 1 January 2020. The final was the first event held at the National Stadium after its rebuild.