The 2002 Lithuanian Athletics Championships were held at the S. Darius and S. Girėnas Stadium in Kaunas on August 13 and August 14, 2002. 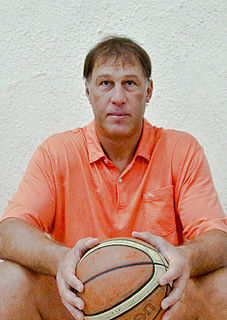 Raimondas Šarūnas Marčiulionis is a Lithuanian retired professional basketball player. Widely considered one of the greatest international players, he was one of the first Europeans to become a regular in the National Basketball Association (NBA). On August 8, 2014, Marčiulionis was inducted into the Naismith Memorial Basketball Hall of Fame, and became a member of the FIBA Hall of Fame in 2015.

The men's discus throw competition at the 2004 Summer Olympics in Athens was held at the Olympic Stadium on 21–23 August. It was originally planned to hold the discus throw at the Ancient Olympia Stadium, but it was discovered that the field was not large enough to accommodate the range of modern discus throwers, and would have posed a danger to spectators. As such, it was decided to move the discus throw and to hold the shot put at the ancient stadium, despite the fact that the shot put was not contested at the Ancient Olympic Games. Thirty-name athletes from 26 nations competed.

Austra Skujytė is a retired Lithuanian athlete, competing in both the heptathlon and the decathlon. On 15 April 2005 in Columbia, Missouri, she broke the women's decathlon world record, with a score of 8358. She is the 2004 Olympic silver medalist and 2012 Olympic bronze medalist in the heptathlon. The later medal was allocated retrospectively following the disqualification in 2016 of original medalist Tatyana Chernova for historic doping offences. 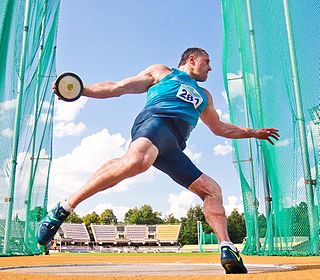 Virgilijus Alekna is a Lithuanian former discus thrower and politician. He won medals at the 2000, 2004 and 2008 Olympics, including two golds.

This article contains an overview of the sport of athletics, including track and field, cross country and road running, in the year 2002.

SELL Student Games is a multi-sport event that is open for all university and college students all over the world. The name of the games is according to the first letters of the hosting countries – Finland, Estonia, Latvia and Lithuania – in their respective languages . The principles of the games are that everyone can participate and therefore the event combines top sports and joyful student event. Nowadays the games gather around 1800–2000 students. 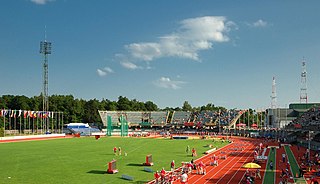 The 7th European Athletics U23 Championships were held between 16 and 19 July 2009 in the S. Darius and S. Girėnas Stadium in Kaunas, Lithuania.

Lithuania competes at the 2009 World Championships in Athletics from 15–23 August in Berlin.

Airinė Palšytė is a Lithuanian high jumper. She won the gold medal at the 2017 European Indoor Championships.

Lithuanian Athletics Championships is the national championship in athletics, organized by the Athletic Federation of Lithuania. The first competition was held in 1921. Women participated since the 1922 championship.

Italy was represented by 73 athletes at the 2010 European Athletics Championships held in Barcelona, Spain. It is the third most important team selection, after those of Munich 2002 and Göteborg 2006. The standard-bearer will be Antonietta Di Martino. 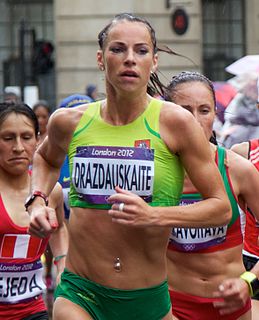 This article is about the particular significance of the year 2010 to Lithuania and its people.

Inga Petrauskaitė-Juodeškienė is a retired Lithuanian long-distance runner. She represented her nation Lithuania in two editions of the Olympic Games, and also set her own personal best of 2:31:30 in the women's division at the 2002 Frankfurt Marathon in Frankfurt, Germany. Before turning her sights to marathon in 2002, Juodeskiene ran a national record of 15:28.66 in the women's 5000 metres at the IAAF Permit Meet in Heusden-Zolder, Belgium that guaranteed her a spot on the Lithuanian team for the 2000 Summer Olympics.

Lithuania competed at the 2017 World Championships in Athletics in London, United Kingdom, from 4 to 13 August 2017.

The Baltic Indoor Athletics Championships was an annual indoor track and field competition between athletes from the Baltic states. The competition featured 26 individual events, divided evenly between the sexes, and had team titles for each sex and an overall combined team title.