The 2003–04 Hong Kong First Division League season was the 92nd since its establishment.

Serse Cosmi is an Italian football coach, currently managing Serie B side Perugia.

Beijing Sinobo Guoan F.C. is a professional Chinese football club that currently participates in the Chinese Super League under licence from the Chinese Football Association (CFA). The team is based in the Chaoyang District in Beijing and their home stadium is the Workers' Stadium with a seating capacity of 66,161. Their shareholders are the real estate company Sinobo Group (64%) and CITIC Limited (36%) of CITIC Group, a state-owned enterprise of China. Beijing Guoan F.C. was founded as a professional team by CITIC Guoan Group, which was a subsidiary of CITIC Group until 2014. The club is one of the four teams to never have been relegated from the league since its debut in 2004. 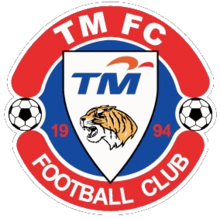 Telekom Malaysia Football Club or commonly known as TMFC is a now defunct Malaysian football club, which originated from Malacca until the club moved their base to Kuala Lumpur on their last season. The club's final home ground was the 25,000 capacity MPPJ Stadium. The club used to play in the top division of Malaysian football, the Malaysia Super League until its final season in 2006–07 Malaysia Super League.

Lee Wai Tong was a Chinese international association football player, head coach, and former Vice President of FIFA. He is often regarded as the greatest Chinese footballer due to his accomplishments in winning several Far Eastern Games titles with the national team as well as captaining the national football squad to their first ever Olympic tournament in 1936, which was held in Berlin. This was also followed by having an extremely successful club career with South China where he won eight league titles with them, helping to establish the club as the most successful team in Hong Kong history at the time. After his retirement, he moved into management where he guided Republic of China to win the 1954 Asian Games.

Public Bank Football Club or Public Bank FC is a now defunct football club from Malaysia, based in Selayang, Selangor. The club home ground is the Majlis Perbandaran Selayang Stadium. The club formerly play in Malaysia Super League before pulled from the league after the end of 2005 season.

Thang Kiang Nam Football Club or Perak TKN is a defunct Malaysian football club based in Ipoh, Perak. The club used to play in the Malaysian League before withdrawing their participation in 2004.

Durham Flames were a semi-professional Canadian football club based in Oshawa, Ontario, Canada. The club competed in the Canadian Professional Soccer League for five seasons from 1999 to 2003.

The 2001–02 Hong Kong First Division League season was the 91st since its establishment.

The 2003–04 Croatian First Football League was the thirteenth season of the Croatian First Football League, the national championship for men's association football teams in Croatia, since its establishment in 1992. The season started on 24 July 2003 and ended on 15 May 2004. Dinamo Zagreb were the defending champions, having won their tenth championship title the previous season. Hajduk Split won the title, after a win against Varteks on 15 May 2004.

The 2003–04 Nemzeti Bajnokság I, also known as NB I, was the 102nd season of top-tier football in Hungary. The league was officially named Arany Ászok Liga for sponsoring reasons. The season started on 25 July 2003 and ended on 27 May 2004.

Statistics of the Yemeni League for the 2003–04 season.