The Seattle Mariners 2004 season was their 28th, and they finished last in the American League West at 63–99. Ichiro Suzuki set the major league record for hits in a season on October 1, breaking George Sisler's 84-year-old mark with a pair of early singles. [1]

At the All-Star Break, the Mariners had lost nine straight and were at 32–54 (.372), seventeen games behind the division-leading Texas Rangers. [4]

On October 1, Ichiro Suzuki set the major league record for hits, breaking George Sisler's 84-year-old mark with a pair of early singles. [5] It was his 258th hit of the season. Later in the game, Suzuki got another hit, giving him 259 this season and a major league-leading .373 average. Fireworks exploded after Suzuki's big hit reached the outfield, creating a haze over Safeco Field, and his teammates mobbed him at first base. The crowd of 45,573 was the ninth sellout this season. [5] After the record breaking hit, Suzuki ran to the first-base seats, bowed respectfully and then shook hands with Sisler's 81-year-old daughter, Frances Sisler Drochelman, and other members of the Hall of Famer's family. [5] Fans in downtown Tokyo watched Suzuki in sports bars and on big-screen monitors. Seattle's hitting coach that season was Paul Molitor. Sisler set the hits record in 1920 with the St. Louis Browns over a 154-game schedule. Suzuki broke it in the Mariners' 160th game. [5] Suzuki's hit came off Ryan Drese, boosting Suzuki to 10-for-20 lifetime against him. Suzuki's sixth-inning infield single came off John Wasdin. After Suzuki's 258th hit, he scored his 100th run of the season when the Mariners batted around in the third, taking a 6-2 lead on six hits. [5] Suzuki's first-inning single was his 919th hit in the majors, breaking the record for most hits over a four-year span. Bill Terry of the New York Giants set the previous record of 918 hits from 1929-32. [5] Suzuki has 921 hits in four seasons.

The following is a list of 2004 Seattle Mariners draft picks. The Mariners took part in the June regular draft, also known as the Rule 4 draft. The Mariners made 48 selections in the 2004 draft, the first being shortstop Matt Tuiasosopo in the third round. In all, the Mariners selected 18 pitchers, 13 outfielders, 6 catchers, 6 shortstops, 3 first basemen, 1 third baseman, and 1 second baseman.

Ichiro Suzuki, often referred to mononymously as Ichiro, is a Japanese former professional baseball outfielder who played 28 seasons combined in top-level professional leagues. He spent the bulk of his career with two teams: nine seasons with the Orix Blue Wave of Nippon Professional Baseball (NPB) in Japan, where he began his career, and 14 with the Seattle Mariners of Major League Baseball (MLB) in the United States. After playing the first 12 years of his MLB career for the Mariners, Ichiro played two and a half seasons with the New York Yankees before signing with the Miami Marlins. He played three seasons with the Marlins before returning to the Mariners in 2018.

John Garrett Olerud, nicknamed Johnny O, is an American former professional baseball player. He played in Major League Baseball as a first baseman from 1989 through 2005, most notably as a member of the Toronto Blue Jays team that won two consecutive World Series championships in 1992 and 1993. He also played for the New York Mets, Seattle Mariners, New York Yankees and the Boston Red Sox. 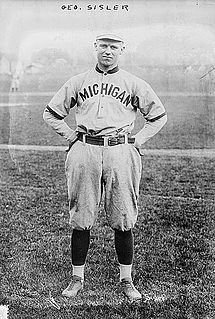 George Harold Sisler, nicknamed "Gorgeous George", was an American professional baseball first baseman and player-manager. He played in Major League Baseball (MLB) for the St. Louis Browns, Washington Senators and Boston Braves. He managed the Browns from 1924 through 1926. 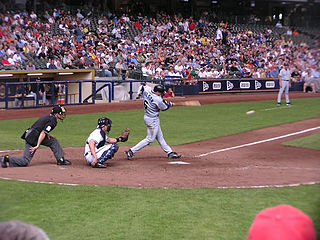 Daniel Allen Wilson, is an American former professional baseball player. He played in Major League Baseball for the Cincinnati Reds and the Seattle Mariners, primarily as a catcher. He is regarded as one of the best defensive catchers in major-league history, setting an American League record for catchers with a .995 career fielding percentage. 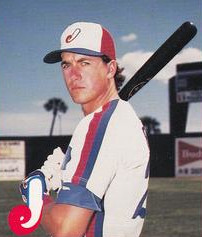 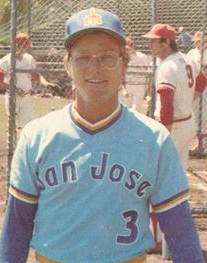 The Seattle Mariners' 2007 season was their 31st in franchise history.

The Seattle Mariners 2006 season was their 30th since the franchise creation, and their third consecutive season finishing at the bottom of the American League West, finishing with a 78–84 (.481) record.

The Seattle Mariners 2005 season was their 29th since the franchise creation, and their second consecutive season finishing at the bottom of the American League West, finishing with a record of 69-93 (.426). They only had one player in the 2005 All-Star Game, who was Ichiro Suzuki with his fifth selection for the All-Star Game.

The Seattle Mariners 2003 season was their 27th since the franchise creation, and ended the season finishing 2nd in the American League West, finishing with a record of 93-69.

The Seattle Mariners 2002 season was their 26th since the franchise creation. After their record 116 wins the previous year, they ended the season 93–69 (.574), but finished 3rd in the American League West and missed the postseason. This season began a playoff drought that has lasted for 18 years and is currently the longest in all of the four North American professional sports.

The Seattle Mariners' 2000 season was the franchise's 24th, and ended in the American League Championship Series, falling to the New York Yankees in six games.

Luis Felipe "Puchy" Delgado Robles is a retired professional baseball player who spent seven seasons in professional baseball, including part of a season (1977) in Major League Baseball with the Seattle Mariners. He played 13 games in his one-year major league career, and had four hits in 22 at-bats, with two runs batted in (RBIs). Over his minor league career, Delgado played for the Class-A Winter Haven Red Sox, the Class-A Winston-Salem Red Sox, the Triple-A Rhode Island Red Sox, and the Triple-A Pawtucket Red Sox in the Boston Red Sox organization; the Triple-A San Jose Missions in the Seattle Mariners organization; the Triple-A Omaha Royals in the Kansas City Royals organization; and the Triple-A Wichita Aeros in the Chicago Cubs organization. In 765 career minor league games, Delgado batted .261 with 729 hits, 89 doubles, 33 triples, and 17 home runs.

Tito Angelo Nanni is a former professional baseball player. Over his career Nanni primarily played first base and outfield. Nanni played in the Seattle Mariners organization for the majority of his career. He also spent part of a season playing for the California Angels and for the Toronto Blue Jays. Nanni played seven seasons in major league baseball, with a career batting average of .228 with a .338 slugging percentage hits, 112 doubles, 13 triples, and 111 home runs in 3234 at-bats.

Roger Christian Hansen is an American former professional baseball player and a former professional baseball coach. Hansen primarily played catcher during his playing career, but also played first base and third base on occasion. Before his current assignment with the Mariners, he was a catching consultant in their organization. Over his playing career, Hansen played for the rookie-level GCL Royals (1980), the Class-A Charleston Royals (1981–1982), the Class-A Fort Myers Royals (1983), the Double-A Jacksonville Suns (1983), the Double-A Memphis Chicks (1984–1985), the Triple-A Omaha Royals (1985–1986), the Double-A Chattanooga Lookouts (1987), the Double-A Vermont Mariners (1988), the Double-A Williamsport Bills and the Triple-A Calgary Cannons. Hansen has never played in Major League Baseball.