The Edmonton Eskimos finished 4th in the West Division with a 5–12–1 record and failed to make the playoffs. It marked the first time since 1962-65 that the team missed the playoffs in consecutive years.

These are the international rankings of Pakistan.

The 2008 Edmonton Eskimos season was the 51st season for the team in the Canadian Football League and their 60th overall. The Eskimos finished 4th in the West Division, but made the playoffs because of the "crossover" rule. Edmonton became the first West team to win the East Semi-Final. The Eskimos attempted to win their 14th Grey Cup championship, but they lost the East Final to the Montreal Alouettes.

The 2009 BC Lions season was the 52nd season for the team in the Canadian Football League and their 56th overall. The Lions finished the season in fourth place in the West Division with a disappointing 8–10 record after losing their last three regular season games. While it was their first losing record since 2001, they still managed to play in the East-Semi Final playoff game against the Hamilton Tiger-Cats after that same team eliminated the Winnipeg Blue Bombers in the last game of the season. The Lions would go on to play in the first East Final in franchise history, which they lost to the Montreal Alouettes. It was the sixth consecutive appearance for the Lions in a division final and the third consecutive season that their season was ended by the eventual Grey Cup champions.

The 2009 Edmonton Eskimos season was the 52nd season for the team in the Canadian Football League and their 61st overall. The Eskimos finished the season in third place with a 9–9 record. They appeared in the West Semi-Final where they lost to the Calgary Stampeders.

The 2009 Winnipeg Blue Bombers season was the 52nd season for the team in the Canadian Football League and their 77th overall. The Blue Bombers were in the playoff hunt until the last game of the season, at home, against the Hamilton Tiger-Cats, but lost the game and failed to qualify for the playoffs for the first time since 2005, finishing the season with a disappointing 7–11 record.

The 2007 Hamilton Tiger-Cats season was the 50th season for the team in the Canadian Football League and their 58th overall. The Tiger-Cats finished in 4th place in the East Division with a 3–15 record and missed the playoffs. 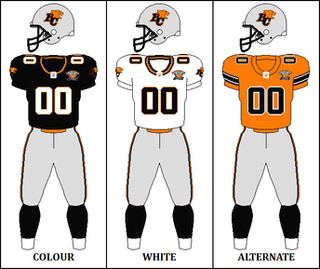 The 2003 BC Lions finished in fourth place in the West Division with an 11–7 record, but they made the playoffs because of the "cross-over" rule. They appeared in the East-Semi Final. The Lions wore orange alternate uniforms c. 1954 to celebrate the team's 50th season. 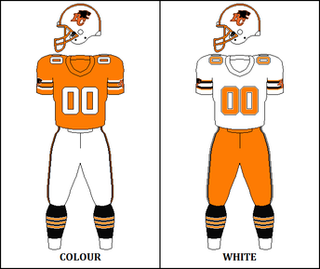 The 1989 BC Lions finished in fourth place in the West Division with a 7–11 record and failed to make to playoffs. 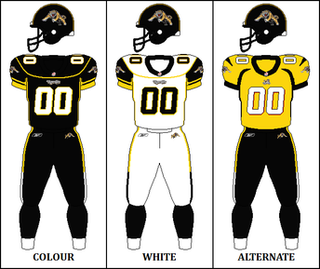 The 2006 Hamilton Tiger-Cats season was the 49th season for the team in the Canadian Football League and their 57th overall. The Tiger-Cats finished in 4th place in the East Division with a 4–14 record and missed the playoffs. Head coach Greg Marshall was fired after the first four games of the season and Ron Lancaster took over as interim head coach for the remaining 14 games.

Chattanooga Football Club is an American professional soccer team based in Chattanooga, Tennessee, United States. Founded in 2009, the team will begin play in the National Independent Soccer Association (NISA) in Spring 2020. Prior to joining the NISA, the club played in the Southeast Division of the National Premier Soccer League (NPSL), a national amateur league at the fourth tier of the American Soccer Pyramid.

The 2010 Edmonton Eskimos season was the 53rd season for the team in the Canadian Football League and their 62nd overall. After the Eskimos lost the final game of the season, they were eliminated from playoff contention, despite winning five of their last seven games.

Aris Thessaloniki F.C. competes in the Greek topflight. They will start their European campaign in the UEFA Europa League Third qualifying round after finishing fourth in last season's playoffs.

The 2010–11 Memphis Grizzlies season was the 16th season of the franchise in the National Basketball Association (NBA), and the tenth for the franchise in Memphis. The 2010–11 Memphis Grizzlies season marked their first playoff appearance since 2006. This season also marked their first playoff win in a series in franchise history by defeating the first seeded San Antonio Spurs in 6 games in an upset, becoming the fourth eighth seed in league history to win a playoffs series against a number one seed, following the Denver Nuggets in 1994, the New York Knicks in 1999, and the Golden State Warriors in 2007. 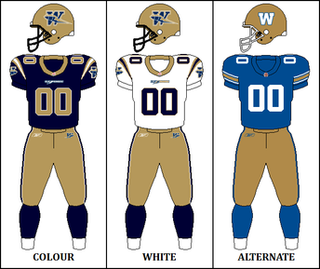 The 2011 Winnipeg Blue Bombers was the 54th season for the team in the Canadian Football League and their 79th overall. The Blue Bombers finished in 1st place in the East Division with a 10–8 record. The team clinched their first playoff berth since 2008 on October 7, 2011 after a 33–17 win over the Hamilton Tiger-Cats. On November 20, 2011, The Blue Bombers defeated the Tiger-Cats 19–3 in the East Final, advancing to the 99th Grey Cup and extending their Grey Cup appearances record to 24. However, the Bombers lost the Grey Cup game 34–23 to the BC Lions, extending their drought to 21 years without a Grey Cup championship. Their Grey Cup appearance marked their final playoff game played in five seasons, failing to make the playoffs in the four subsequent seasons following their loss to the Lions team. Incidentally, their first playoff game subsequent to their four-year playoff drought was also against the same BC Lions team they lost in the Grey Cup game in 2011, losing in a 32-31 come-from-behind victory for the Lions, ending the 2016 Winnipeg Blue Bombers season. Additionally, the Blue Bombers wouldn't host another playoff game again until the 2017 CFL season, this time losing to the Edmonton Eskimos 39-32.

The 2011 Edmonton Eskimos season was the 54th season for the team in the Canadian Football League and their 63rd overall. The Eskimos improved upon their 7–11 record from 2010, after winning their eighth game on October 10, 2011, while also securing a berth in the playoffs in that same game. The Eskimos finished in 2nd place in the West Division with an 11–7 record and hosted a playoff game for the first time since 2004, ending the CFL's longest active drought. The Eskimos defeated their Alberta rivals, the Calgary Stampeders, 33–19 in the West Semi-Final, but lost to the BC Lions 40–23 in the West Final.

The 2011–12 Major Indoor Soccer League season was the third under the MISL banner and fourth season overall. It was also the 34th season of professional Division 1 indoor soccer. The Milwaukee Wave won their sixth title in franchise history and second MISL title in a row. 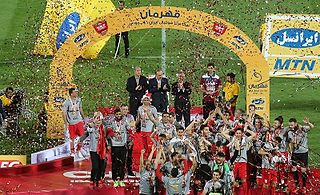