The following players were selected in the 2010 NFL Draft:

The following Cowboys were signed as undrafted free agents:

DeMarco Murray is an American football coach and former running back who played in the National Football League (NFL) for seven seasons. A three-time Pro Bowl selection and one-time first-team All-Pro, he was the NFL Offensive Player of the Year in 2014 when he led the NFL in both rushing yards and rushing touchdowns. 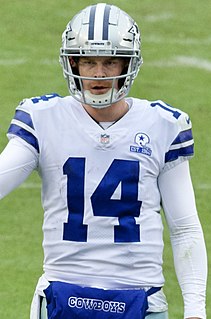 Andrew Gregory Dalton is an American football quarterback for the Chicago Bears of the National Football League (NFL). Nicknamed "The Red Rifle", Dalton was previously a member of the Cincinnati Bengals and Dallas Cowboys. He played college football at TCU, where he became the school's leader in quarterback wins and won the 2011 Rose Bowl.

The 2009 Texas Longhorns football team represented the University of Texas at Austin in the 2009 NCAA Division I FBS football season. The team was coached by Mack Brown. Texas played their home games in Darrell K Royal–Texas Memorial Stadium.

The 2009 South Carolina Gamecocks football team represented the University of South Carolina in the 2009 NCAA Division I FBS football season. The team's head coach was Steve Spurrier, who was in his fifth season at USC. The Gamecocks played their home games at Williams-Brice Stadium in Columbia, South Carolina. Carolina finished the season 7–6, winning the Palmetto Bowl over in-state rival Clemson 34–17 in their final regular season game, before losing in the PapaJohns.com Bowl 20–7 against Connecticut. 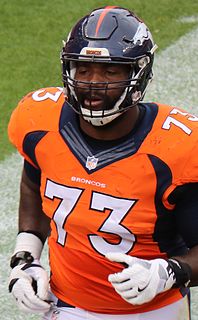 Russell Okung is an American football offensive tackle who is a free agent. He played college football for Oklahoma State University, and was twice recognized as an All-American. He was drafted by the Seattle Seahawks with the sixth overall pick in the 2010 NFL Draft, and has also played for the Denver Broncos, Los Angeles Chargers, and Carolina Panthers.

The 2009 Texas Tech Red Raiders football team represented Texas Tech University in the 2009 NCAA Division I FBS football season. The team was coached by Mike Leach during the regular season, and was coached by interim head coach Ruffin McNeill during the 2010 Valero Alamo Bowl. The Red Raiders played their home games at Jones AT&T Stadium in Lubbock, Texas. The football team competed in the Division I NCAA Division I Football Bowl Subdivision. The Red Raiders finished the season 9–4, 5–3 in Big 12 play and won the Valero Alamo Bowl 41–31 against Michigan State.

The 2009 Iowa State Cyclones football team represented Iowa State University in the 2009 NCAA Division I FBS football season. The team was led by first year head coach Paul Rhoads. They played their home games at Jack Trice Stadium in Ames, Iowa. The Cyclones finished the season 7–6, 3–5 in Big 12 play and beat Minnesota 14–13 in the Insight Bowl.

Michael Iupati is a Samoan-American former gridiron football guard who played for 11 seasons in the National Football League (NFL). A native of American Samoa, Iupati went to high school in southern California, played college football at Idaho, and earned consensus All-American honors. Iupati was selected by the San Francisco 49ers in the first round of the 2010 NFL Draft. He played five seasons with the 49ers, four with the Arizona Cardinals, and two with the Seattle Seahawks. 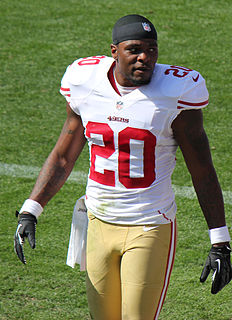 Perrish Eugene Cox is a former American football cornerback and return specialist. He was drafted by the Denver Broncos in the fifth round of the 2010 NFL Draft. He played college football at Oklahoma State.

The 2010 Kansas Jayhawks football team represented the University of Kansas in the 2010 NCAA Division I FBS football season which was the school's 121st season. The Jayhawks played their home games on Kivisto Field at Memorial Stadium in Lawrence, Kansas.

The 2010 Missouri Tigers football team represented the University of Missouri in the 2010 NCAA Division I FBS football season. The team was coached by Gary Pinkel, who returned for his tenth season with Mizzou, and played their home games at Faurot Field at Memorial Stadium. The team began the season fresh off their fifth straight bowl appearance. The team hired a new public address announcer, Randy Moehlman.

The 2010 Oklahoma State Cowboys football team represented Oklahoma State University in the 2010 NCAA Division I FBS football season. The team was coached by sixth-year head coach Mike Gundy and played their homes game at Boone Pickens Stadium. They played in the Big 12 Conference in the South Division. They finished the year with an 11–2 record and a 36–10 victory over Arizona in the Alamo Bowl. Along the way, the Cowboys set a new school record for wins in a season, with 11. It was also the fourth 10-win season in the Cowboys' 110-year football history; the others came in 1984, 1987 and 1988.

The 2010 Mountain West Conference football season was the 12th since eight former members of the Western Athletic Conference banded together to form the MW.

The 2011 Oklahoma State Cowboys football team represented Oklahoma State University in the 2011 NCAA Division I FBS football season. The Cowboys were led by seventh year head coach Mike Gundy and played their home games at Boone Pickens Stadium. They are a member of the Big 12 Conference.

Greg Adkins is an American football coach and former player. He is currently the offensive line coach at the University of South Carolina. Adkins has coached at both the college level and the NFL. He has 29 years of experience working as an offensive line and tight ends coach, as well as serving as a recruiting coordinator at several schools. He has coached in multiple national championship games and conference championship games, as well as 15 bowl games.

The Texas Longhorns football statistical leaders are individual statistical leaders of the Texas Longhorns football program in various categories, including passing, rushing, receiving, total offense, defensive stats, and kicking. Within those areas, the lists identify single-game, single-season, and career leaders. The Longhorns represent the University of Texas in the NCAA's Big 12 Conference.