The 200 series (200系) was a Shinkansen high-speed train type introduced by Japanese National Railways (JNR) for the Tohoku Shinkansen and Joetsu Shinkansen high-speed rail lines in Japan, and operated by East Japan Railway Company (JR East) until 2013. They actually predated the 100 series trains, having been built between 1980 and 1986. It was one of the two recipients of the 23rd Laurel Prize presented by the Japan Railfan Club, the first Shinkansen type to receive that award. The last remaining sets were retired from regular service in March 2013, and were completely withdrawn from service in April 2013.

The 200 Series Shinkansen trains resembled the earlier 0 series trains in styling (some later units had the pointed 'shark nose' of the 100 series), but were lighter and more powerful, since these two lines are mountain routes and have steeper gradients. These lines are also prone to snowfall and the trains had small snowplows fitted, as well as protection of equipment against snow.

They were originally painted in ivory with a green window band and lower bodyside band, but a number of sets were refurbished and painted into a white-upper/dark blue-lower scheme with new wrap-around cab windows from 1999.

The first units were capable of 210 km/h (130 mph) but later ones can do 240 km/h (150 mph), and four were converted to be capable of 275 km/h (171 mph). Some units were also modified with retractable couplers in the nose for coupling with Yamagata Shinkansen Tsubasa and Akita Shinkansen Komachi Mini-shinkansen sets, but these are no longer in service. In addition, some of the later 200 series shinkansen trains were fitted with double-deck cars, which had semi-open standard-class compartments on the lower deck and green class (first class) seating on the upper deck. These too have been removed from service.

Withdrawal of the earlier units began in 1997, and the last remaining unrefurbished set was withdrawn in May 2007.

Since their introduction in 1982, the 200 series sets have been operated in a number of different formations as described below. [1]

12-car sets for Tōhoku Shinkansen Yamabiko and Aoba services, and for Jōetsu Shinkansen Asahi and Toki services. These had a maximum speed of 210 km/h, and remained in service until early 1993.

Some F sets are similar to the H sets in that the driving trailer cars were built with a pointed nose, just like the latter. These trains however, feature a solid green line unlike the H sets, where they have two green lines, one thick and one thin, separated by a thin white section near the bottom.

One F set, F17, was specially modified at Sendai Depot between August 1997 and January 1998 for use on additional Nagano Shinkansen Asama services in February 1998 during the 1998 Winter Olympics held in Nagano. The train was renumbered F80, and modifications included ability to operate on both 25 kV AC 50 Hz and 60 Hz overhead power supplies, weight-saving measures to comply with the 16 tonne axle load restriction, and additional control equipment to cope with the 30‰ gradient of the Nagano Shinkansen. [4] Maximum speed was limited to 210 km/h when operating on the Nagano Shinkansen. [4]

Seats in the end cars, cars 1 and 12, were replaced with E2 series-style seats to reduce weight. [4]

After February 1998, set F80 was used interchangeably with other F sets, and remained in operation until 2004.

Regular operations using 16-car H sets ended from the start of the revised timetable on 13 March 2004, but sets H4 and H5 were reinstated as 12-car sets from the summer of 2004 for seasonal use with their Green cars removed. These two sets survived until mid-2005. [2]

8-car and later 10-car sets with a maximum speed of 240 km/h modified with nose-end couplers to operate in conjunction with 400 series Yamagata Shinkansen sets and E3 series Akita Shinkansen sets.

The K sets are formed as follows. [8]

On 23 June 2007, 10-car set K47 was used for a special Yamabiko 931 service from Omiya to Morioka to mark the 25th anniversary of the opening of the Tohoku Shinkansen. [9] Set K47 was specially repainted back into its original ivory and green livery for this event. [9]

On 30 March 2013, 10-car set K47 was used for a special Sayonara 200 series Yamabiko (さよなら２００系やまびこ号) train operated from Morioka to Tokyo, following the withdrawal of 200 series trains from regular scheduled services on 16 March. [12]

On 14 April 2013, 10-car set K47 was used for two final Sayonara 200 series (さよなら２００系号) services from Niigata to Tokyo and from Omiya to Niigata, marking the last public operation of the 200 series trains. [14]

A refurbished 200 series train (set K25 on the Toki 325 service) derailed on the Jōetsu Shinkansen line while travelling at a speed of approximately 200 km/h between Nagaoka Station and Urasa Station on 23 October 2004 during the 2004 Chūetsu earthquake. Eight of the ten cars were derailed. This was the first derailment of a Shinkansen train in service. None of the 155 passengers on board was injured. Set K25 was officially withdrawn on 25 March 2005. [2] 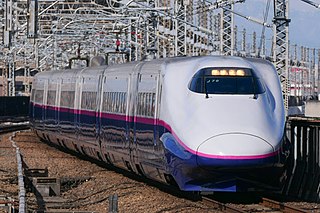 The Komachi (こまち) is a high-speed shinkansen service between Tokyo and Akita in Japan, operated by the East Japan Railway Company since March 1997. It is the only shinkansen service that runs on the Akita Shinkansen, and uses E6 series trains. Between Tokyo Station and Morioka, it couples with Tōhoku Shinkansen E5 series Hayabusa and formerly E2 series for E3 series. After Morioka, the Komachi service continues along standard gauge tracks that were converted from narrow gauge. Because it then runs on tracks that have grade crossings, its maximum speed from Morioka to Akita is 130 km/h (80 mph), compared to 320 km/h (200 mph) on the Tohoku Shinkansen. 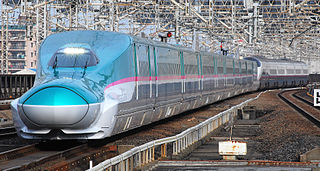 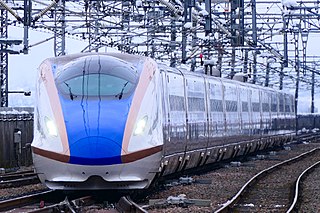 Aoba is the name of a number of train services that formerly operated in Japan by Japanese National Railways (JNR), and most recently an all-stations service operated by East Japan Railway Company until September 1997 on the high-speed Tōhoku Shinkansen in Japan.

The Shinkansen Relay (新幹線リレー号) was a train service operated by Japanese National Railways (JNR) in Japan between 1982 and 1985.