Promoted to League One

Relegated from League One

Twenty-four teams contest the division: 18 sides remaining in the division from last season, four relegated from League One, and two promoted from Conference National.

Notts County were the oldest club in the Football League and the 2009–10 season was their 121st year in The Football League. An unknown Investment company took over Notts County in early June with Sven-Göran Eriksson becoming Director of Football and he left on 12 February. On 12 February, Ray Trew became owner of the club following the Peter Trembling's sale. 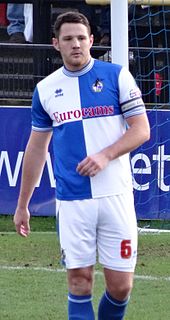 Thomas Peter Wilson Parkes is an English professional footballer who plays as a defender for Exeter City.

The 2010–11 Football League Two season,, was the lowest division of the Football League for that season. It began on 7 August 2010 and concluded on 28 May 2011 with the play-off final.

During 2011 and 2012, Bristol Rovers Football Club participated in League Two, the fourth level of English football. It was 129th season of football played by Bristol Rovers, and their 85th in the Football League. The previous saw Bristol Rovers end a four-year tenure in League One. Despite initial optimism of an instant return, the campaign proved disappointing as Rovers struggled for much of the season under new manager Paul Buckle before being replaced by Mark McGhee who brought about an upturn in fortunes to finish 13th.

The 2012-13 season was 126th season of Cheltenham Town's existence, and their 13th in the Football League since promotion from the Conference National in 2000.

Ryan Christopher Edwards is an English professional footballer who plays as a defender for Scottish Premiership club Dundee United.

The 2012–13 season is the 92nd season of competitive football for Rochdale A.F.C., a professional English football club based in Rochdale, Greater Manchester. Rochdale return to Football League Two for 2012-13 following a two-season stint in League One which ended with a last-place finish in 2011-12. Rochdale began their 2012–13 Football League Two season with a 0-0 draw with Northampton. They entered into three cup competitions in the first round due to the league table they are in. John Coleman's and Jimmy Bell's contracts were terminated by Rochdale on 21 January 2013 following a poor run in form.

Barnet began the season with a new manager after Lawrie Sanchez was sacked towards the end of the 2011/12 season and subsequent caretaker manager Martin Allen was not asked to continue. The new manager was Mark Robson, who was appointed on 10 June 2012. However, after failing to win any of his first 13 games, Edgar Davids was brought in to partner Robson as well as taking up playing duties. Robson departed the club on 28 December 2012, leaving Davids in sole charge. Barnet were relegated on the last day of the season, finishing 23rd with 51 points.

The 2012–13 season was the 146th season in Chesterfield's history. Along with League Two, the club also participated in the FA Cup, Football League Cup and Football League Trophy. The season covered the period from 1 July 2012 to 30 June 2013.

The 2015–16 Football League Trophy was the 32nd season in the history of the competition, a knock-out tournament for English football clubs in League One and League Two, the third and fourth tiers of the English football. Barnsley of League One won the competition, defeating Oxford United of League Two 3–2 in the final. It was the last tournament to take place before the introduction of Category 1 Academy teams and an initial group stage before the knockout rounds.

For the 2009–10 season, Carlisle United F.C. competed in Football League One.