Petr Fiala won a landslide victory when he received 437 votes. Fiala said that he wants to change political culture in ODS and that he wants to be a leader similar to Václav Klaus and Margaret Thatcher. [4] [5]

Previous leader of ODS and Prime Minister Petr Nečas had to resign as a result of 2013 political corruption scandal. Martin Kuba became acting leader of ODS while Miroslava Němcová was nominated to the position of Prime Minister. President Miloš Zeman refused to appoint Němcová as a Prime Minister and called on early elections on 25–26 October 2013. ODS was heavily defeated and gained only 16 Seats in Chamber of Deputies. Leadership of the party then resigned. [6]

Miroslava Němcová announced on 6 December 2013 that she doesn't intend to run for a position of party's leader. Some sources stated that her decision was to give opportunity to former Minister of Education Petr Fiala whose candidacy was speculated. [7] Petr Fiala announced his candidacy on 7 December 2013. He stated that ODS ceased to function as a political party and [8] Fiala quickly gathered support from regional organisations and many influential members of the party. Jiří Pospíšil expressed his support to Fiala. [9] On 19 December 2013, Němcová reportedly announced her candidature to Civic Democratic members of parliament. She refused to announce her candidacy publicly. [10]

Fiala's nomination speech received standing ovation while Němcová's speech was noted by hurtful feeling. Kožušník's speech was received negatively. Fiala won the election by a large margin, being elected in the first round. [18] Němcová was visibly disappointed and stated that the result isn't fair when she considers how much she did for the party. [19] 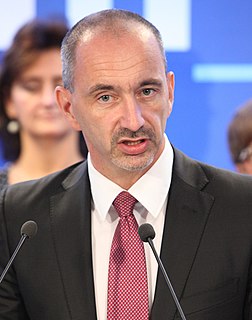 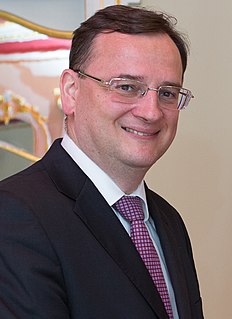 The Civic Democratic Party (ODS) leadership election of 2012 was a part of party's congress. Incumbent leader and Prime Minister Petr Nečas sought re-election. Nečas faced Ivan Fuksa who announced his candidacy only a day prior the election. 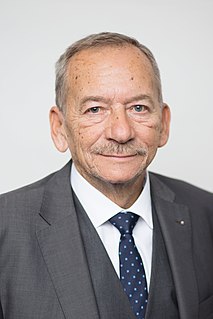 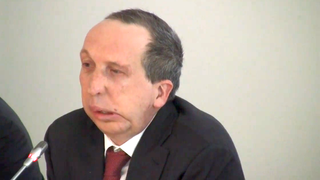 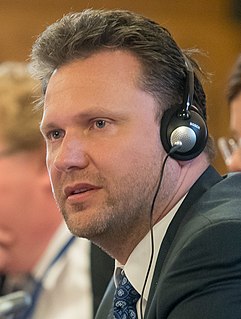 The Czech political party TOP 09 held a leadership election on 24 November 2019. The incumbent leader Jiří Pospíšil decided not to seek a new term. Markéta Adamová was elected the new leader when she defeated Tomáš Czernin.

The 2020 Civic Democratic Party (ODS) leadership election was held on 18 January 2020. The incumbent leader Petr Fiala was running for another term as the sole candidate. Fiala was reelected with 90% of the vote.

Election of the President of the Senate of the Czech Republic was held on 19 February 2020 following death of incumbent President Jaroslav Kubera. Civic Democratic Party nominated Miloš Vystrčil for the position of the new Senate President while the Mayors and Independents nominated the acting President Jiří Růžička. Vystrčil won the election with 52 votes against Růžička's 21 votes.