Aizawl won their first title on the final day after securing a draw against Shillong Lajong on 30 April 2017. Defending champions Bengaluru FC finished in the fourth place. Dempo had entered the league after being promoted from the I-League 2nd Division but withdrew from the league along with Salgaocar and Sporting Goa. Aizawl were reinstated into the league after being relegated while Churchill Brothers, Chennai City, and Minerva Punjab were granted direct-entry into the I-League.

Ten teams are competing in the league. The majority of the teams from the previous season as well as recently promoted Dempo were originally supposed to compete this season. Dempo were promoted to the I-League on 30 May 2016, defeating Minerva Academy 3–1. [2] Aizawl were relegated from the I-League the previous season, despite finishing above last place DSK Shivajians who were exempt from relegation. However, on 27 September 2016, the All India Football Federation (AIFF) announced that Aizawl would be reinstated into the I-League for the 2016–17 season. [3]

Throughout the summer of 2016, the three Goan I-League clubs – Dempo, Salgaocar, and Sporting Goa – had been indecisive over their participation in the league. On 24 June 2016 it was first announced that Salgaocar and Sporting Goa would withdraw from the I-League following their displeasure over the proposed roadmap for Indian football for the 2017–18 season, with Dempo also threatening to do so next. [4] However, in September 2015 it was revealed that despite withdrawing Sporting Goa and Dempo still submitted their AFC Licensing documents needed for I-League play. [5] It was then revealed on 10 November that both Sporting Goa and Dempo were given national licenses for the I-League. [6] Despite this though, however, on 22 November 2016 it was officially announced by Sporting Goa that they would withdraw from the I-League for good. [7]

As well as dealing with the Goan clubs potential exit from the league, the AIFF have also worked on providing direct-entry for certain clubs into the I-League for this season. On 26 October 2016 it was revealed that both Minerva Academy and FC Bardez had submitted documents for direct-entry into the I-League. [8] However, on 23 November, it was announced that the AIFF would be issuing new tenders for a direct-entry side in the league after none of the three sides which applied fulfilled the financial criteria. [9]

On 8 December 2016, after Dempo confirmed their exit from the league, the AIFF reinstated Churchill Brothers into the I-League. [10] Finally, on 11 December 2016, the AIFF granted direct-entry to both Chennai City and Minerva Punjab to bring the number of teams in the league to ten. [11]

A team can register up to four foreign players, of which one should compulsorily be a national of an Asian Country. [36]

Churchill Brothers led the fair play table at the end of the season. [41]

Hero of the Match

Hero I-League 2016–17 awards were voted by coaches and captains of the participating teams. [42] 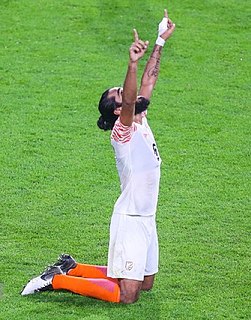 Sandesh Jhingan is an Indian professional footballer who plays as centre back for the Indian Super League club ATK Mohun Bagan FC and the India national team. Jhingan won the AIFF emerging player of the year award in 2014 and debuted for the national side in 2015. Currently he holds the record for the most number of appearances for Kerala Blasters.

The 2014–15 I-League is the eighth season of the I-League, the Indian professional league for association football clubs, since its establishment in 2007. The season began on January 17, 2015, after the conclusion of the Federation Cup and finished on the 31 May 2015 with a title deciding match between defending champions Bengaluru FC and Mohun Bagan. Mohun Bagan scored a late equalising goal to win the championship by two points. It was to be their first I-League title and fourth Indian championship in total

The 2015–16 I-League was the ninth season of the I-League, the Indian professional football league, since its establishment in 2007. The season commenced on 9 January 2016, after the Indian Super League finished, and concluded on 24 April 2016.

The 2015–16 season was the third in the history of Bengaluru Football Club. It began on 1 June 2015 and concluded on 31 May 2016, with competitive matches occurring between January and May. The club ended their I-League campaign as champions for the second time, only winning by two points ahead of second placed Mohun Bagan. In the Federation Cup, Bengaluru were eliminated early in the first round, suffering defeat to Aizawl. In the AFC Cup, Bengaluru managed to make it past the Round of 16, defeating Kitchee. The victory had qualified the club for the quarter-finals which would take place the next season.

The 2015–16 Mohun Bagan A.C. season is the 126th season of Mohun Bagan A.C. since the club's formation in 1889 and their 9th season in the I-League which is India's top football league. During this season, Mohun Bagan started the I-League as the defending champions. The team finished 3rd in the Calcutta Football league and runners-up in the I-League. Mohun Bagan were defeated by Shandong Luneng of China in the preliminary round 2 of the AFC Champions League and were eliminated from the competition at this stage. They bowed out of the AFC Cup in the round of 16 where they were defeated by the Tampines Rovers of Singapore. They were crowned Champions of the Federation Cup after they defeated Aizawl in the final.

The 2016–17 season was the 138th season of competitive association football in India.

The 2016–17 season was the fourth in the history of Bengaluru Football Club. It began on 1 July 2016 and concluded on 30 June 2017, with competitive matches occurring between September and May. The season was a historic one for the club as they became the first Indian club to reach the final of the AFC Cup – suffering defeat against Al-Quwa Al-Jawiya. The club also won their second Federation Cup, while in the league, Bengaluru ended their final I-League campaign in fourth place.

The 2016–17 season was Mumbai F.C.'s eighth season in the I-League since its establishment in 2007. Mumbai were relegated to I-League 2nd division at the end of the season.

The 2016–17 season was the club's 97th season in existence. The club had already won the Calcutta Football League and became the runners of 2016 Bordoloi Trophy.

The 2016–17 Indian Federation Cup was the 38th and last edition of the Federation Cup, the main domestic football cup competition in India. The top eight teams from the 2016–17 I-League season will participate in the tournament which will be hosted solely in Cuttack, Odisha. The tournament is set to take place between 7 May to 21 May 2017. Mohun Bagan are the defending champions.

The 2016–17 season is the 33rd season in the history of Aizawl Football Club and their second in the I-League, India's top flight professional football league. The season began on 1 August 2016 and will conclude in May 2017. The club ended the I-League campaign as the champions after they were reinstated into the league after they were relegated the previous season. The club will also participate in the Federation Cup while they also made it to the semi-finals of the Mizoram Premier League and the Durand Cup.