In the electoral system introduced in 1996, the President of Chad is elected to a five-year term using a two-round system, with an absolute majority required to prevent a second round of voting. [1] 23 candidates submitted their applications to run for the presidency. President Idriss Déby ran for a fifth term in office and was expected to win. [2] One of the opposition's most prominent members, Ngarlejy Yorongar, was prevented from running due to administrative irregularities. [3]

Chad's opposition led a large-scale nationwide shutdown on 24 February 2016 to protest Déby's continuing 26-year tenure. The nationwide strike brought many of Chad's towns and the capital N'Djamena to a halt with markets, schools, transport, district centers and various operations shut down. It was the sixth major protest against Déby since the beginning of the year and various residents in N'Djamena claimed that it was the largest protest ever against the President. [4] The campaign was run under the slogan "Ça Suffit", French for "That's enough". [5]

On the day of the election mobile internet, fixed internet connections and SMS messaging were cut. Furthermore, many foreign TV operators could not cover the post election scene as their filming licenses were not renewed. [6] French broadcaster, TV5Monde had their equipment confiscated and their crew were held for several hours for filming at a polling station. [7]

Results announced by the electoral commission on 21 April 2016 showed Déby winning in the first round of voting with 61.56% of the vote. All of the other candidates trailed far behind. Long-time opposition leader Saleh Kebzabo, who placed second, was credited with 12.80% of the vote. [8]

The Constitutional Council validated the results on 4 May 2016, dismissing a joint appeal from opposition candidates, who alleged irregularities, on the technical grounds that it could not review appeals submitted jointly. The final results issued by the court showed Déby with 59.92% of the vote and Kebzabo with 12.77%. [9]

The African Union, of which Déby is the current chairperson, declared that the election was carried out "without fraud" despite various discrepancies in the electoral process. [11] The report stated that various polling station staff were under-trained and of all the ballot boxes observed, 81% of the ballot boxes were not checked to see if they were empty at the start of the polling. Furthermore, 10% of the polling stations did not provide secrecy in voting; however, the elections were peaceful and concluded fairly. [12]

Runner-up Saleh Kebzabo refused to accept the outcome of the vote, stating that it was an "electoral stick-up." Other opposition politicians cite alleged ballot irregularities, including the disappearance of boxes and stuffing. [13] [14]

Marshal Idriss Déby Itno is a Chadian politician who has been the President of Chad since 1990. He is also head of the ruling Patriotic Salvation Movement. Déby is of the Bidyat clan of the Zaghawa ethnic group. He took power at the head of a rebellion against President Hissène Habré in December 1990 and has since survived various rebellions and coup attempts against his own rule. He won elections in 1996 and 2001, and after term limits were eliminated he won again in 2006, 2011, and 2016. He added "Itno" to his surname in January 2006. He is a graduate of Muammar Gaddafi's World Revolutionary Center. Déby's multi-decade rule has been described as authoritarian by several international media sources.

Ismaïl Omar Guelleh is the current president of Djibouti, in office since 1999. He is often referred to in the region by his initials, IOG. 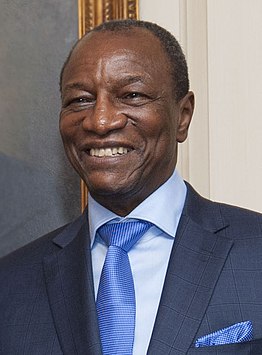 Alpha Condé is a Guinean politician who has been President of Guinea since December 2010. He spent decades in opposition to a succession of regimes in Guinea, unsuccessfully running against President Lansana Conté in the 1993 and 1998 presidential elections and leading the Rally of the Guinean People (RPG), an opposition party. Standing again in the 2010 presidential election, Condé was elected president in a second round of voting. When he took office that December, he became the first freely elected president in the country's history. Condé was reelected in 2015 with about 58% of the vote.

The Association Tchadienne pour la Promotion et la Défense des Droits de l'Homme or Chadian Association for the Promotion and Defence of Human Rights is a human rights organization operating in Chad. According to group co-founder Delphine Djiraibe, following the rebellion by Idriss Déby that overthrew the dictatorship of Hissène Habré in 1990, she and several colleagues returned to Chad from abroad and saw widespread starvation and poverty among the people. The event motivated them to found the ATDPH to prevent similar suffering in the future.

Presidential elections were held in Chad on 2 June 1996, with a second round on 3 July. They were the first multiparty presidential elections in the history of Chad and occurred at the end of a long transitional process after repeated delays. The elections were won by the incumbent President Idriss Déby, who easily defeated a prominent southern politician, Wadel Abdelkader Kamougué, in the second round. Déby benefited from the support of another southern politician, Saleh Kebzabo, who was placed third in the first round. The election was marred by widespread and credible reports of electoral fraud and government intimidation of opposition forces, confirmed by international observers. Voter turnout was 67.5% in the first round and 77.7% in the second.

Presidential elections were held in Chad on 20 May 2001. Incumbent President Idriss Déby of the Patriotic Salvation Movement was re-elected with 63% of the vote.

Presidential elections were held in Chad on 25 April 2011, after being postponed from 3 April. 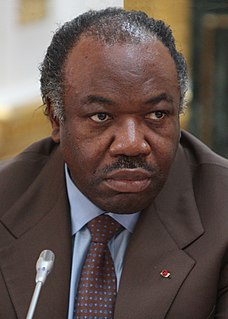 Presidential elections were held in Gabon on 27 August 2016. Incumbent President Ali Bongo Ondimba ran for re-election and was challenged by former Minister of Foreign Affairs Jean Ping. On 31 August, the electoral commission proclaimed Bongo's re-election with a margin of less than two percent. Large protests broke out in the capital Libreville after the results were announced. Numerous irregularities and the official results from Haut-Ogooue showing that 99.9% of the electorate had voted and Bongo had received 95.5% of the votes led observers to question the impartiality of the electoral commission.

Presidential elections are scheduled to be held in Chad on April 10, 2021. Incumbent Idriss Déby, who has served five consecutive terms since seizing power in the 1990 coup d'état, is running for a sixth. Déby has been described as an authoritarian by several international media sources, and as "strongly entrenched". During previous elections, he has forbidden the citizens of Chad from making posts online, and while Chad's total ban on social media use was lifted in 2019, restrictions continue to exist.

The 2021 Chadian protests is mass protests and a day-wide general strike and opposition-led street protest movement that started as small-scale marched that turned into violent rallies from 5-6 February 2021 in Chad, mainly N'Djamena, against president Idriss Deby’s intention to run for sixth term in the 2021 Chadian presidential election. The announcement came on the evening of 4 February, sparking opposition clashes with security forces across the capital, despite restrictions and ban of protest actions. Police fired Tear gas at protesters calling for the overhaul of the sixth term intention, and calls for president Idriss Deby to resign grew louder. The protests escalated, violence took place during the protests. Protesters threw stones at the police while chanting No Sixth Term. After the protest rallies and street marches, demonstrations was suppressed and police presence remained secured and tight p/heightened throughout the capital.