The party was heavily defeated and received only 5%. Speculation about possible successors to Kalousek started, centring on Markéta Pekarová Adamová and Jiří Pospíšil. [2] On 24 October 2017, Kalousek announced that he would not seek reelection. [6]

Pekarová Adamová said she was considering running and that she would decide within a week, [7] eventually deciding not to run, to focus on her family instead. [8] Ludmila Štvánová announced her candidacy on 3 November 2017. [9] On 4 November 2017, MEP Luděk Niedermayer joined the party, provoking speculation about his possible candidacy. Jakub Lepš, whose candidacy was suggested by Karel Schwarzenberg, admitted that he could run. [10]

Michal Horáček is a Czech entrepreneur, lyricist, poet, writer, journalist and music producer. From 2007 until 2010, he was the chairman of the Czech Academy of Popular Music. He founded Czech betting company Fortuna. He stood to become Czech president in the 2018 presidential election, but came in 4th in the first round, failing to advance. 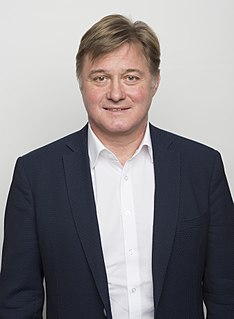 A leadership election for the Czech Social Democratic Party (ČSSD) was held on 1 March 2019. The incumbent leader Jan Hamáček was elected for second term when he received 433 votes while 57 delegates voted against him and 11 abstained.