The 2017 World RX of Norway was the sixth round of the fourth season of the FIA World Rallycross Championship. The event was held at the Lånkebanen near Hell, Nord-Trøndelag. [1] 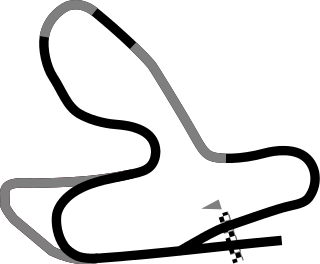 Lånkebanen is a road racing circuit situated near Hell in Lånke, Stjørdal, Norway. The venue opened in 1987 as the first asphalt track in the country. It is used for a variety of motorsports, including rallycross, go-kart and motorcycle racing. The venue also features a designated hillclimbing and a motocross track on the slopes below, and a harness racing oval. Lånkebanen is owned by the Norwegian Automobile Federation (NAF). 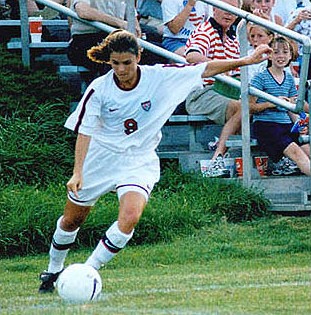 Isabell Lehn Herlovsen is a Norwegian football player who is currently playing for Vålerenga after moving home from China and the club Jiangsu Suning. She plays as a midfielder and a striker.

Tom Henning Øvrebø is a Norwegian former football referee. He has been a UEFA Elite referee, having refereed matches in the UEFA Cup and the UEFA Champions League. Øvrebø has also worked as a qualified psychologist outside football.

Ezinne Okparaebo is Scandinavia's fastest women ever over 60m and 100m, representing Norway. Okparaebo holds the Norwegian national records over 60 metres and 100 metres and has won the 100m nationals for 13 times. She moved to Norway as a nine-year old and grew up in Ammerud. She visited the Haugen skole, where her sprinting talent was discovered on a sports school day. She has been the top female sprinter in Norway since 2005, and is competing for the club IL Norna-Salhus. She won the silver medal at 60 metres for women in the 2009 European Athletics Indoor Championships and the bronze medal in the same discipline in 2011 European Athletics Indoor Championships. 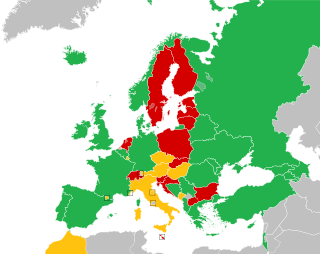 The Eurovision Song Contest 2010 was the 55th edition of the annual Eurovision Song Contest. It took place in Oslo, Norway, following Alexander Rybak's win at the 2009 contest in Moscow, Russia with the song "Fairytale". It was the third time Norway had hosted the contest, having previously done so in 1986 and 1996. The contest was broadcast from the Telenor Arena in Bærum, Greater Oslo, Norway. The 2010 winner was Germany with Lena singing "Satellite", written by American Julie Frost and Denmark's John Gordon. It was Germany's first win in twenty-eight years, its second since the Contest's inception, and its first win as a unified country. It was also the first time a "Big Four" country won the contest since the rule's introduction in 2000.

Norway participated in the Eurovision Song Contest 2014 in Copenhagen, Denmark. The Norwegian entry was selected through the national competition Melodi Grand Prix 2014, organised by the Norwegian broadcaster Norsk rikskringkasting (NRK). Norway was represented by the song "Silent Storm" performed by Carl Espen and written by Josefin Winther. The entry qualified from the second semi-final and placed 8th in the final, scoring 88 points. 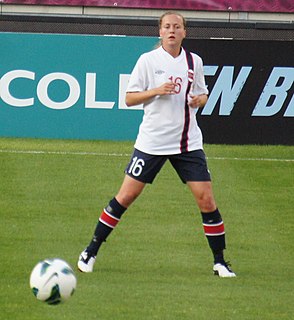 Kristine Minde is a Norwegian footballer who plays for VfL Wolfsburg of the German Frauen-Bundesliga, having previously played for Arna-Bjørnar in her native Norway. She has represented the Norway women's national football team since 2011 and featured at the 2011 and 2015 FIFA Women's World Cups, as well as UEFA Women's Euro 2013. In November 2013 she got married and took her husband's name, becoming Kristine Minde. 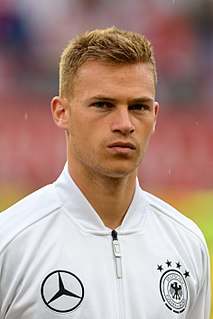 Joshua Walter Kimmich is a German professional footballer who plays primarily as a right back for Bayern Munich and the Germany national team.

Casper Ruud is a Norwegian professional tennis player from Snarøya in Bærum.

Norway participated in the Eurovision Song Contest 2017. The Norwegian broadcaster NRK organised the national final Melodi Grand Prix 2017 in order to select the Norwegian entry for the 2017 contest in Kiev, Ukraine.

Onema Grace Geyoro is a DR Congolese born French football player who plays as a defensive midfielder for Paris Saint-Germain in the Division 1 Féminine and for the French national team.

The Eurovision Song Contest 2018 was the 63rd edition of the annual Eurovision Song Contest. It took place in Lisbon, Portugal, following Salvador Sobral's win at the 2017 contest in Kiev, Ukraine with the song "Amar pelos dois". It was the first time the contest took place in Portugal - 53 years after the Iberian nation made its debut. The contest was held at the Altice Arena, and consisted of two semi-finals on 8 and 10 May, and the final on 12 May 2018. The three live shows were hosted by Filomena Cautela, Sílvia Alberto, Daniela Ruah and Catarina Furtado.

Aleksander Walmann Åsgården, known professionally as simply Aleksander Walmann, is a Norwegian singer and songwriter. He represented Norway in the Eurovision Song Contest 2017 with the song "Grab the Moment", along with music producer JOWST finishing in 10th place.