On 10 October 2018, István Tarlós announced that he will run for a third term as Mayor, after negotiating about his future role with Prime Minister Viktor Orbán. [1] [2] Also in October, independent publicist Róbert Puzsér declared his run for the mayorship, and published his manifesto Walking Budapest. [3]

In December 2018, the Hungarian Socialist Party reached an agreement with independent candidate Róbert Puzsér about a two-round primary. According to that, there would be a first round (in February), where the socialists and their allies would participate, and a second round (in June) where the "candidate of the centre" would join them. [4]

The first round was conducted between 28 January and 3 February. Two candidates participated: Csaba Horváth (MSZP group leader in the General Assembly) and Gergely Karácsony (Dialogue, mayor of Zugló).

After the first round, a second round between Karácsony and Puzsér was planned in July. Opposition parties Politics Can Be Different and Jobbik endorsed Puzsér, with the condition that he takes part in the primary. Multiple forums and debates were held between the two, but on 8 April Puzsér announced he would not take part, citing a recent agreement about district mayoral candidates which did not include the parties supporting him.

The European Parliament election caused a major change in the balance of power, as the Socialists-Dialogue alliance gained only 6% of the votes, with the Democratic Coalition taking 16% and new party Momentum (M) taking almost 10%. This prompted Momentum to announce their candidate, entrepreneur Gábor Kerpel-Fronius (hu) on 3 June, [6] followed by the Democratic Coalition on 6 June, their candidate being television host Olga Kálmán. [7]

The second round was conducted between 20 and 26 June with online and in-person voting. On 23 June a televised debate was held between the three candidates on the channel ATV. [8]

According to the organizers' self-imposed criteria, the primary was valid, as more than 50 000 valid votes were cast.

István Tarlós is a Hungarian politician, who served as the Mayor of Budapest from 2010 to 2019. Previously he served as the Mayor of the Third District (Óbuda-Békásmegyer) of the city between 1990 and 2006. Since 2006 he was the Chairman of the Fidesz–Christian Democratic People's Party (KDNP) Fraction-Alliance in the General Assembly of the Municipality of Budapest, and served as the political leader of the initiative "Social Referendum 2008". 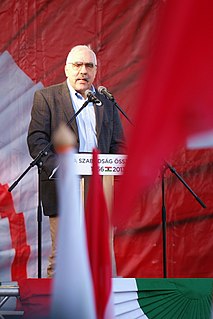 Zsolt Láng is a Hungarian politician and member of the National Assembly (MP) between 2010 and 2014. He served as the mayor of District II of Budapest from 2006 to 2019.

Together, officially Together – Party for a New Era, formerly also known as Together 2014, was a social-liberal political party in Hungary formed on 26 October 2012 for the 2014 Hungarian parliamentary election by Gordon Bajnai, the former Prime Minister of Hungary, to contrast Viktor Orbán's government. Together was founded as a coalition of left-wing and liberal political movements and civil organizations that transformed itself into a party in March 2013.

Hungarian Liberal Party is a liberal political party in Hungary that was formed on 27 April 2013 and is led by Anett Bősz. 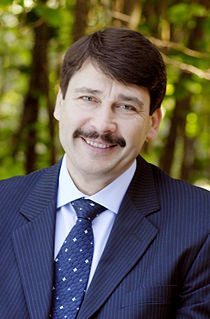 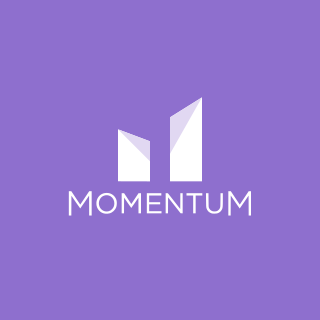 Momentum Movement is a centrist Hungarian political party founded in March 2017. It came to national prominence as a political association in January 2017 after organizing a petition about the Budapest bid for the 2024 Summer Olympics, calling for a public referendum on the matter. The petition, which gathered over 266 151 signatures, was successful, but the government cancelled the Olympic bid before a referendum could have been held. After its establishment as a political party, Momentum quickly built a national following, and presently has approximately 4,000 members.

Zoltán Bodnár is Hungarian economist, banker and jurist, former CEO of the Magyar Export-Import Bank (Exim). He was also Deputy Governor of the Hungarian National Bank (MNB) from 1997 to 1998. 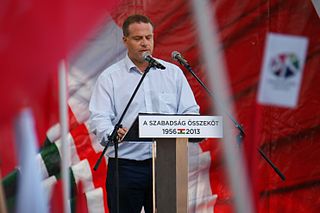 Péter Juhász is a Hungarian telemarketer, cannabis activist and politician, who served as leader of the Együtt party from February 2017 until its dissolution.

The 2014 Budapest mayoral election was held on 12 October 2014 to elect the Mayor of Budapest (főpolgármester). On the same day, local elections were held throughout Hungary, including the districts of Budapest. The election was run using a First-past-the-post voting system. In contrast with previous elections where the Mayor served a 4-year term, the winner of this election served for 5 years.

The 2010 Budapest mayoral election was held on 3 October 2010 to elect the Mayor of Budapest (főpolgármester). On the same day, local elections were held throughout Hungary, including the districts of Budapest. The election was run using a First-past-the-post voting system. The winner of this election served for 4 years. 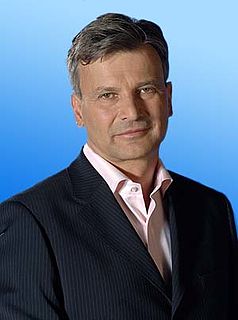 The 2006 Budapest mayoral election was held on 1 October 2006 to elect the Mayor of Budapest (főpolgármester). On the same day, local elections were held throughout Hungary, including the districts of Budapest. The election was run using a First-past-the-post voting system. The winner of this election served for 4 years.

Márta Váradiné Naszályi, commonly known as Márta V. Naszályi, is a Hungarian landscape architect, horticulturist and politician, who has been the Mayor of Budavár since 2019. She is a member of the Dialogue for Hungary (PM).

An agreement was reached on 15 November 2020 between six major opposition parties in Hungary, about running in a cooperation in the 2022 Hungarian parliamentary election. The parties in the agreement are : Democratic Coalition, Jobbik, LMP – Hungary's Green Party, Momentum Movement, Hungarian Socialist Party and Dialogue for Hungary, which together received 46.47% of the party list vote in the 2018 election. They declared they will have a common candidate for the post of Prime Minister decided via primary election. They previously reached an agreement in August to run common candidates in the 106 constituencies around the country.