The JPL Small-Body Database shows a linear minimum possible distance of 0.000007 AU (1,000 km) from the center of Earth, [2] which would be inside of the 6,371 km radius of Earth. It is not listed on the more thorough Sentry Risk Table [3] because Sentry accounts for orbit propagation nonlinearities along the line of variations and the nonlinearities do not intersect where Earth will be.

1994 WR12 is a sub-kilometer asteroid and near-Earth object of the Aten group, approximately 130 meters (430 feet) in diameter. First imaged at Kitami Observatory on 26 November 1994, it was discovered two nights later by American astronomer Carolyn S. Shoemaker at Palomar Observatory on 28 November 1994. The asteroid then went unobserved from 1994 until it was recovered by Mauna Kea in March 2016. It was removed from the Sentry Risk Table on 2 April 2016.

(276033) 2002 AJ129, provisional designation 2002 AJ129, is a Mercury-crossing asteroid. It has the ninth-smallest perihelion of all numbered asteroids, after asteroids such as 2000 BD19, 2004 UL, and 2008 XM. It makes close approaches to all of the inner planets and asteroid 4 Vesta. The asteroid is estimated to be between 0.5–1.2 kilometers (0.3–0.7 mi) across. In January 2018 there was much media hype about this asteroid being classified as a potentially hazardous asteroid, although there is no known threat of an impact for hundreds if not thousands of years. The media has compared the size of the asteroid to the Burj Khalifa in Dubai.

(163132) 2002 CU11, provisional designation 2002 CU11, is a bright, sub-kilometer asteroid, classified as near-Earth object and potentially hazardous asteroid of the Apollo group. Based on absolute magnitude, it is the second largest asteroid known to have passed closer than the Moon.

2014 XL7 is a near-Earth object and Apollo asteroid, approximately 230 meters (750 feet) in diameter. It was the most dangerous potentially hazardous asteroid on Sentry Risk Table upon its discovery by the Mount Lemmon Survey in December 2014. At the time, the asteroid had a cumulative 1 in 83000 chance of impacting Earth on 4–5 June between the years 2048 and 2084. After the object's observation arc had been extended to 35 days, it was removed from the Sentry Risk Table on 15 January 2015. Since then the asteroid's orbit has been secured. Although it has an Earth minimum orbit intersection distance of less than one lunar distance, there are no projected close encounters with Earth in the foreseeable future, with its closest passage to occur in May 2046, still millions of kilometers away. 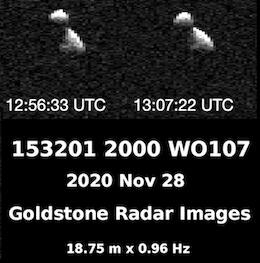 (153201) 2000 WO107 is a sub-kilometer asteroid, classified as near-Earth object and potentially hazardous asteroid of the Aten group with a very well determined orbit. It was discovered on 29 November 2000, by astronomers of the Lincoln Near-Earth Asteroid Research (LINEAR) at the Lincoln Laboratory's Experimental Test Site near Socorro, New Mexico, in the United States. It is a contact binary.

2013 TX68 is an Apollo asteroid and near-Earth object discovered on 6 October 2013 by the Catalina Sky Survey, during which it was near a close approach of 5.4 Lunar distances (LD) from the Earth. The asteroid only has a 10-day observation arc which makes long-term predictions of its position less certain. It was observed for three days as it approached Earth in the night sky starting with the sixth of October, 2013. Then it became unobservable by being between the Earth and the Sun, then not recovered due to its small size and dimness. Precovery images by Pan-STARRS from 29 September 2013 were announced on 11 February 2016 that extended the observation arc to 10 days. It was removed from the Sentry Risk Table on 11 February 2016, so there is no risk of impact from this object for the next hundred years or more. The asteroid was last observed on 9 October 2013. 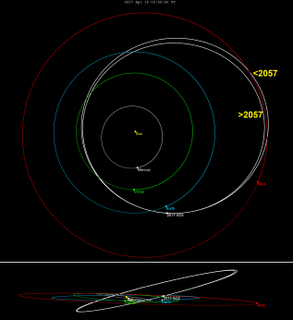 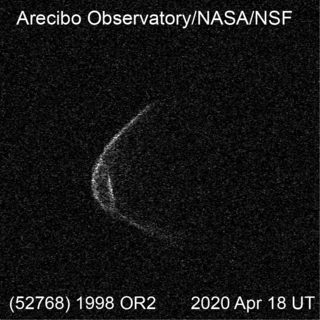 (52768) 1998 OR2 (provisional designation 1998 OR2) is an asteroid on an eccentric orbit, classified as a near-Earth object and potentially hazardous asteroid of the Amor group, with a diameter of 2 kilometers (1.2 mi). It was discovered on 24 July 1998, by astronomers of the Near-Earth Asteroid Tracking (NEAT) program at the Haleakala Observatory, Hawaii. It is one of the brightest and therefore largest potentially hazardous asteroids known to exist. With an observation arc of 32 years, the asteroid has a well-determined orbit, and its trajectory is well known through the year 2197. The asteroid's orbit is only potentially hazardous on a time scale of thousands of years. 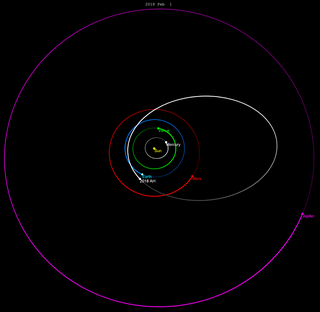 2018 AH is a sub-kilometer asteroid, classified as near-Earth object of the Apollo group, approximately 100 m (300 ft) in diameter. It was first observed on 4 January 2018, by the Asteroid Terrestrial-impact Last Alert System (ATLAS) on Mauna Loa and quickly followed-up by many other surveys, with precovery observations found from Pan-STARRS and PTF from the day previous.

2018 CC is a micro-asteroid, classified as a near-Earth object of the Apollo group, approximately 20 meters (70 ft) in diameter. Its official first observation was made by the Catalina Sky Survey at Mount Lemmon Observatory, Arizona, United States, on 4 February 2018. Two days later, the asteroid crossed the orbit of the Moon and made a very close approach to Earth.

(85182) 1991 AQ, provisional designation 1991 AQ, is a stony asteroid on a highly eccentric orbit, classified as near-Earth object and potentially hazardous asteroid of the Apollo group, approximately 1.1 kilometers in diameter. It was discovered on 14 January 1991, by American astronomer Eleanor Helin at the Palomar Observatory in California. Based on its brightness variation of 0.69 magnitude, this Q-type asteroid is likely elongated. It belongs to the small group of potentially hazardous asteroids larger than one kilometer. 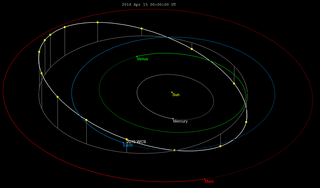 2010 WC9, unofficially designated ZJ99C60, is a sub-kilometer near-Earth asteroid of the Apollo group, approximately 100 meters (330 feet) in diameter. First observed for eleven days by the Catalina Sky Survey in 2010, the asteroid was recovered in May 2018 during its sub-lunar close encounter with Earth.

2019 UN13 is a small near-Earth asteroid roughly 1–2 meters in diameter. Even though the asteroid was in the night sky for months, it was fainter than the sky survey limit of apparent magnitude 24 until 29 October 2019 when the asteroid was two million km from Earth. It was discovered on October 31, 2019, passing 6,200 km above Earth's surface. 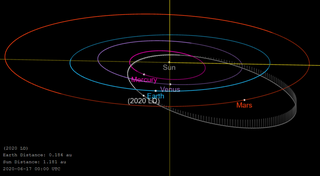 2020 LD is an Apollo near-Earth asteroid roughly 140 meters in diameter. It was discovered on 7 June 2020 when the asteroid was about 0.03 AU from Earth and had a solar elongation of 154 degrees. The glare of the Sun had masked the approach of the asteroid since November 2019. The asteroid passed closest approach to Earth on 5 June 2020 at a distance of 0.002 AU. The close approach distance is now known with an accuracy of roughly ± 1000 km. This is the largest asteroid to pass closer than the Moon this year and possibly the largest since (308635) 2005 YU55 in November 2011. The asteroid makes close approaches to Mercury, Venus, Earth, and Mars. It will be brighter than apparent magnitude 24 until 18 July 2020. 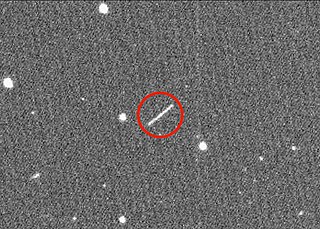 2020 QG, also known by its internal designation ZTF0DxQ, is an Earth-crossing asteroid, a few meters in diameter. It belongs to the Apollo group, and passed above the surface of Earth approximately 2,950 kilometres (1,830 mi) away on 16 August 2020 at 04:09 UT. It was first imaged by the Zwicky Transient Facility (ZTF) at the Palomar Observatory about 6 hours after this closest approach, and was later identified by Kunal Deshmukh, a student at the Indian Institute of Technology Bombay, along with colleagues Kritti Sharma, Chen-Yen Hsu and Bryce T. Bolin analyzing images from the ZTF.

2019 PG1 is a sub-kilometer near-Earth object and potentially hazardous asteroid of the Apollo class, discovered by Pan-STARRS on 8 August 2019, two weeks after it passed Earth at 62 LD. With an observation arc of 103 days, Earth approach dates become divergent by 2042 as the date of closest approach in 2042 has an uncertainty of ±3 days.

2020 XR is an Apollo near-Earth object and potentially hazardous asteroid roughly 390 meters in diameter. With a 5-day observation arc it was briefly listed as having a 1 in 11,000 chance of impacting Earth on 1 December 2028 placing it at the top of the Sentry Risk Table with a Palermo scale rating of -0.70.

2020 SW is a tiny near-Earth asteroid discovered by the Mount Lemmon Survey on 18 September 2020, six days before it made its closest approach to Earth. The asteroid passed within 21,600 kilometres (13,400 mi) from Earth's surface on 24 September 2020 11:13 UT, within the geostationary altitude of 36,000 kilometres (22,000 mi). The encounter with Earth perturbed the asteroid's heliocentric trajectory from an Apollo-type orbit to an Aten-type orbit with a semi-major axis within one astronomical unit from the Sun. As a result, the asteroid will not make any close approaches to Earth within 0.01 astronomical units (4 LD) in the next 200 years.