The 2021 Dutch curfew riots (Dutch : avondklokrellen) were a series of riots in the Netherlands that initiated as protests against the government's COVID-19 prevention measures and specifically the 21:00–4:30 curfew that was introduced on 23 January 2021. The police have described the riots as the worst in the country since the 1980 coronation riots. [4]

The proposal to introduce a nationwide curfew to curb the spread of the coronavirus disease 2019 (COVID-19) had been put on the table by the Outbreak Management Team (OMT) as early as September 2020, but did not gain the support of the House of Representatives at the time, because of its strong association with World War II. [15] [16]

Four months later, however, the measure was deemed necessary as the number of infections was not declining fast enough, despite the fact that the Netherlands had been in a full lockdown since 14 December 2020. [17] Furthermore, the more transmissible B.1.1.7 variant of the virus continued to spread across the country, raising concerns for a potential "third wave" of infections. [18]

Non-violent protests against the government's COVID-19 prevention measures had taken place on several occasions prior to the announcement of the curfew. However, on 24 January 2021, illegal demonstrations against the curfew in Amsterdam and Eindhoven escalated into violent riots in response to police interventions. [22] [23] Calls to riot were subsequently spread on social media, leading to riots in other places as well. [2] Zwolle
Places in the Netherlands where rioters clashed with the police, as of 26 January 2021 [24]

During the first night of the curfew, the police issued 3,600 fines for being outside after 21:00 without a valid reason. [11] Anti-lockdown protesters gathered in Amersfoort, Rotterdam, IJmuiden and Stein to demonstrate. [25]

On Urk, a former island in the province of Flevoland, groups of youths began to riot in protest against the curfew. The rioters vandalised police cars, and threw stones and fireworks at police officers. [26] Later that evening, a COVID-19 testing site of the Municipal Health Service (GGD) was set on fire. [26] Two suspects have subsequently been arrested. [26]

On 24 January in the afternoon, hundreds of protesters gathered on Museumplein in Amsterdam, despite the fact that Mayor Femke Halsema, the chief police officer and the chief public prosecutor had prohibited the demonstration. The police used water cannons and police dogs to disperse the crowd, in response to which the protesters began throwing firework bombs towards police officers. [27]

Similarly, in Eindhoven, rioters – who had come to the city centre to protest against the lockdown measures – attacked the police by throwing stones, golf balls, fireworks and knives. [28] They also set vehicles on fire and looted a supermarket in the city's central station. [28] According to ProRail, hundreds of thousands of euros in damage was inflicted to the railway station. [29]

In the evening, riots also took place in Enschede, Helmond, Roermond, The Hague, Tilburg and Venlo. [30] In Enschede, rioters attempted to break the windows of the local hospital, Medisch Spectrum Twente. [31] More than 300 people were arrested.

150 people were arrested during the night from 25 to 26 January in Amsterdam and Rotterdam. Shops were looted and vandalized. The cities of Den Bosch, Zwolle, Amersfoort, Alkmaar, Hoorn, Gouda, Haarlem, and Veenendaal experienced troubles, including cars being burned and police attacked with stones. [32] [33]

The riots that took place on 26 January were less heavy than the previous days. Despite some small riots in Amsterdam, Rotterdam and Hilversum, and some disturbances in The Hague, Schijndel and Julianadorp, the situation in these six cities and villages was under control within about an hour. [36]

Many cities also saw massive support coming from their locals. Cities such as Maastricht, saw its hardcore fanbase of its local football club, the angel side, gather as a reaction to the threats made by supposed rioters. A couple hundred supporters marched through the city, eventually making their way to the city centre to make a statement: "we will not tolerate destruction and looting". Most of them went home around 21.00 to adhere to the curfew rules.

On 27 January, there were no major riots, only small disturbances in The Hague and Rotterdam. In Rotterdam a theatre was set on fire. [37]

Apart from a relatively large group of youths who were shooting fireworks in Tiel, there were no more riots or disturbances reported throughout the Netherlands as of 28 January. [38]

On 31 January, protests against the curfew were held in Amsterdam and Apeldoorn. There were no major riots, but dozens of people were arrested after the police had ended the demonstrations. [39]

Demissionary Prime Minister, Mark Rutte, told reporters that the recent events "have nothing to do with protests, this is criminal violence and we will treat it as such". [40]

Minister of Finance Wopke Hoekstra said that the riots will not make the government "capitulate to a few idiots". [41] Minister of Justice and Security Ferdinand Grapperhaus said the same. "Apparently small groups find it necessary to riot. But that is not because of the corona policy, because you don't have to loot a shop for that", he said. Grapperhaus added that the police and Royal Marechaussee are cracking down on the rioters. They will be subject to summary judgment and can face unconditional prison sentences. [41]

The mayor of Eindhoven John Jorritsma gave a statement that: "If we continue down this way, we will head to civil war." [43]

The mayor of Rotterdam Ahmed Aboutaleb released a video in which he directly addressed the rioters. He asked if they felt proud to have destroyed their own hometown and promising them police will crack down on them. He went on to applaud the real heroes of the city's history, that rebuilt the city after the Rotterdam Blitz instead of destroying it. To the entrepreneurs whose establishments were damaged he promised to work together with insurance companies to support them. [44]

A spokesperson of the Dutch armed forces stated that the Royal Netherlands Army has not yet been asked to help curb the riots. However, if the armed forces are asked to help "it would be limited to logistical and material support". [45] Geert Wilders submitted a law proposal enabling the army to assist law enforcement, however, the proposal failed to receive any support aside from his own party, the PVV. [46]

Remko Pasveer is a Dutch professional footballer who plays as a goalkeeper for Ajax.

Jeroen Johannes Hendrikus Blijlevens is a retired road bicycle racer from the Netherlands, who was a professional rider from 1994 to 2004. He most recently worked as a directeur sportif for UCI Women's WorldTeam CCC Liv, and has also worked as a cycling co-commentator at Eurosport Netherlands.

S.C.F. Hooligans is a Dutch football hooligan firm associated with Feyenoord. The number of supporters in the year 1990 was estimated at around 350 people. The characteristics are a tattoo on the right forearm, some clothing and a hat. The group consists of a mix of men from different backgrounds, both workers and students and working fathers. There are often two distinct groups: the 'old' hard core and the 'new' hard core, also known as Feyenoord third generation Rotterdam (FIIIR). 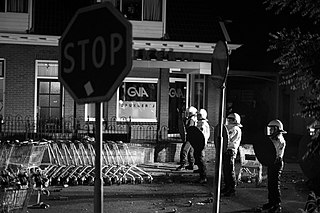 Project X Haren was an event that started out as a public invitation to a birthday party by a girl on Facebook, but ended up as a gathering of thousands of youths causing riots on 21 September 2012 in the town of Haren, Groningen, Netherlands.

This article lists some of the events from 2015 related to the Netherlands.

BIJ1, formerly known as Article1, is a political party in the Netherlands. It was founded in Amsterdam in 2016 by Sylvana Simons, a television personality who was formerly connected to another party, Denk. BIJ1 aligns itself as a progressive left-wing party, advocating economic justice and fighting racism and discrimination in the Netherlands.

Famke Louise Meijer , known as simply Famke Louise, is a Dutch YouTuber, model and singer from Amsterdam. She took part in the 19th season of the Dutch television series Expeditie Robinson. 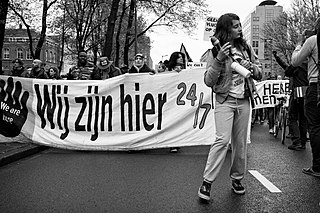 We Are Here is a collective of migrants based in Amsterdam, the Netherlands, which campaigns for human rights for its members and all undocumented migrants. The asylum seekers have in many cases had their applications to remain in the Netherlands denied but they either cannot go back or refuse to return to their country of origin. They ask for access to social services such as medical care and housing. The group formed in 2012 and by 2015 contained over 200 migrants from around 15 countries.

Squatting in the Netherlands is the occupation of unused or derelict buildings or land without the permission of the owner. The modern squatters movement began in the 1960s in the Netherlands. By the 1980s, it had become a powerful anarchist social movement which regularly came into conflict with the state, particularly in Amsterdam with the Vondelstraat and coronation riots.

The 2019–2020 Dutch farmers protests is a series of civil disobedience demonstrations by Dutch livestock farmers, characterised by the usage of tractors to block roads, occupy public spaces and intimidate officials. The protests were initially triggered by a government proposal to limit nitrogen emissions in the Netherlands by halving the country's livestock, but protesting farmers have frequently told media that they are motivated by a perceived lack of respect for their profession by the Dutch populace, media and politicians.

Gerard Weber was a Dutch professional footballer for Excelsior Rotterdam. Nicknamed Webertje, Weber was known for his speed. He played both as a midfielder and as a forward. Weber won several championships with Excelsior. He went on to manage football teams in the Rotterdam region.

The Ubica buildings are two adjacent buildings standing at 24 and 26 Ganzenmarkt, in central Utrecht, the Netherlands. Number 24 is a rijksmonument. The first recorded mention of the buildings is from 1319. After centuries of residential use, the buildings were bought by the Ubica mattress company in 1913 and used until a devastating fire in 1989. The buildings were then squatted for 21 years, before being redeveloped into a hotel and café-restaurant in 2014. 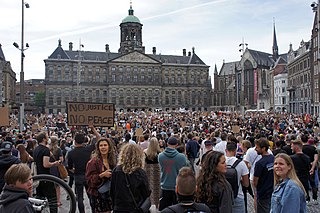 Shortly after protests seeking justice for the murder of George Floyd, an African-American who was killed during a police arrest, began in the United States, people in the Netherlands protested to show solidarity with Americans and to demonstrate against issues with police or racism. Vigils and protests of up to thousands of participants have taken part nationwide.

NIDA is a political party in the Netherlands, describing itself as "being inspired by Islam". It was founded in 2013 by Nourdin El Ouali, a former municipal councillor in Rotterdam for GroenLinks. The party is currently only represented at the municipal level, with two seats in Rotterdam and one seat in The Hague. The party shares the same electorate as Denk, mostly Islamic immigrants, although NIDA is more religiously oriented.

In the evening of 6 July 2021, Dutch investigative journalist and crime reporter Peter R. de Vries was shot in the head after leaving the television studio of RTL Boulevard in Amsterdam where he had appeared as a guest. Several bullets were fired at him in the Lange Leidsedwarsstraat, near the Leidseplein, while he was walking to his car. He was taken to the VU University Medical Center in critical condition. The hospital became heavily secured by police that same evening. De Vries died from his injuries on 15 July 2021.

Keyennu Lont is a Dutch professional footballer who plays as a winger for Eerste Divisie club Helmond Sport.