The 25th Special Mission Forces Division, mostly known by their former name Tiger Forces or Quwwat al-Nimr (Arabic : قُوَّات النِّمْر‎), is an elite formation (special forces unit) of the Syrian Arab Army which functions primarily as an offensive unit in the Syrian Civil War. It has been described as a "hot commodity for any government offensive", but their relatively small numbers make it difficult to deploy them to multiple fronts at once. [2]

According to Gregory Waters, the Tiger Forces are operated by the Air Force Intelligence Directorate. [3] p. 2 [4] After successful operations in Latakia and Hama, [3] p. 2 Colonel Suheil al-Hassan was tasked a special project by the Syrian Armed Forces Central Command in the fall of 2013—to train and lead a Special Forces unit that would work primarily as an offensive unit. Colonel Hassan handpicked many of the soldiers that would later form the Tiger Forces. [5] Initially, the unit was formed by recruiting personnel from the 53rd Regiment (part of Special Forces Command) and the 14th Special Forces Division, on the other hand, heavy equipment was supplied by the 4th and 11th Divisions. [6]

On 25 December 2015, Suheil al-Hassan was promoted to major general after refusing to be brigadier general the year before. [7] He played a key role in commanding Syrian troops during the 2016 Aleppo campaign. The Tiger Forces were tasked with cutting the key rebel supply lines to Aleppo city.

In early spring 2015, following Syrian government's loss of the city of Idlib, the unit was reorganised. [3] p. 3 The Tiger Forces were one of few in the Syrian Army to first deploy Russian T-90 tanks, [8] others being the 4th Armoured Division and Desert Hawks Brigade. [9] [10] A Russian-supplied Rys LMV was seen after defeating ISIL in the village of Ayn Al-Hanish in the Dayr Hafir Plains. [11]

The most famous and effective tactic of the Tiger Forces is probing the enemy from multiple axes to find a weak spot, then sending a large mechanized force to that area to capture many villages at once. [12] According to Gregory Waters, they ultimately report to Major General Jamil Hassan, the director of the country's Air Force Intelligence Directorate. [13]

On 29 August 2019, the Syrian Government reorganized the unit, renaming it from Tiger Forces to 25th Special Mission Forces Division and placing it under the Syrian Army's central command, while keeping Maj. Gen. Suheil al-Hassan as its commanding officer. [16] [17]

According to Gregory Waters for the Middle East Institute in October 2018, [3] the Tiger Forces deploy approximately 24 groups (halfway between a company and a battalion), which organise about 4,000 infantry, as well as an attached artillery regiment and an armoured unit. [3] p. 6 Alongside permanent troops, the Tiger Forces make use of affiliated militia, who remain largely garrisoned in their hometowns until called on to join offensives as the need arises.

Later reports seem to suggest an altered internal structure, stating that the unit consists of the following subunits: [18] [19]

The Tiger Forces consisted of as many as 24 subgroups of varying size. Tiger Forces groups/subunits were founded by prominent individuals who often also served as commanders of a particular group (the group often bearing the name of the individual who founded and/or commanded the group). [1]

Cheetah Forces [28] or Qawat al-Fahoud (قوات الفهود) [29] as of October 2018 is the largest sub-unit of the Tiger Forces. [3] p. 8 The Cheetah Forces is subdivided into as many as 14 Company-level units: Cheetah 1 to Cheetah 10, Cheetah 15, Cheetah 16, Cheetah 41 and the 2nd Storming Battalion (Rami Hamadi Group). [3] p. 8 Cheetah 6 were the first soldiers that ended the 35-month long Relieving of Kuweires Military Airbase, [30] [31] while Cheetah 3 along with the Desert Hawks Brigade completed the East Aleppo ISIS encirclement. [32]

Panther Forces [33] – According to Leith Fadel in 2016, the commander was Colonel Ali Shaheen, [34] and they were involved in the Palmyra offensive (March 2016), where they were redeployed to another front after it was over. [33] [34] According to Waters, the "Panther Groups" are actually the Cheetahs, and are not commanded by Ali Shaheen, who instead commands the Leouth Groups. [13]

Both the artillery and armoured units are independent from other groups, reporting directly to the Tiger Forces’ command. The size of the armoured unit is unknown.

The Tiger Forces regular groups have local defensive units, as well as operational units which deploy across the country. [3] p. 6 According Gregory Waters, the operational units outside standing groups make up one-and-a-half to two brigades. [3] p. 6

The Ba'ath Brigades, also known as the Ba'ath Battalions, were a volunteer militia made up of Syrian Ba'ath Party members, almost entirely of Sunni Muslims from Syria and many Arab countries, loyal to the Syrian Government of Bashar al-Assad. It was set up in Aleppo under the command of Hilal Hilal, the current Assistant Regional Secretary, after rebels took most of the eastern half of Aleppo in summer 2012. Initially, the Ba'ath Brigades were used to guard government buildings and other key installations in the city, but their role has expanded as their strength has grown from 5,000 members in November 2012 to 7,000 in December 2013. Units have since also formed in Latakia and Tartus. At the end of 2013, the Brigades began deploying in Damascus, tasked with manning checkpoints and conducting "light logistical operations". They spearheaded the assault on the Old City of Aleppo in early 2014.

The 2014 Hama offensive, codenamed Ghazwat Badr al-Sham al-Kubra, was a military operation launched by Syrian rebels during the Syrian Civil War in the northern parts of Hama Governorate, in an attempt to reach the Hama Military Airport and the provincial capital of the province. It was also launched in an attempt to cut the supply line to Aleppo, especially after the rebels seized the village of Rajhan.

The Battle of the Shaer gas field is a battle between the Islamic State of Iraq and the Levant (ISIL) and the Syrian government for the control over the Sha'er gas field during the Syrian Civil War. It is the second attack that was launched by ISIL on the gas field.

The al-Ghab offensive was an offensive launched by rebels during the Syrian Civil War to capture areas surrounding Jisr al-Shughur, and to establish a foothold in the al-Ghab plain, in northwestern Syria's Idlib and Hama governorates.

The Aleppo offensive was an operation that started on 16 October when the Syrian Army launched a large-scale strategic offensive south of Aleppo. The main objective of the operation was to secure the Azzan Mountains, while also creating a larger buffer-zone around the Syrian Government’s only highway leading to the provincial capital. The objective was also reportedly to set conditions for an upcoming offensive to isolate rebel forces in Aleppo City and to relieve the long-standing siege of a pro-government enclave in Aleppo Province. 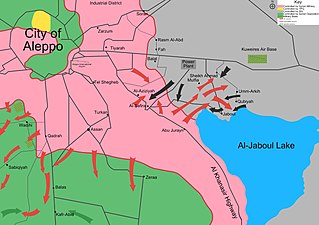 On 14 September 2015, the Syrian Arab Army (SAA) – in cooperation with the National Defence Forces (NDF) and the Al-Ba'ath Battalion – launched a fresh offensive inside the Aleppo Governorate's southeastern countryside in order to lift the Islamic State of Iraq and al-Sham's (ISIS) two-year-long siege of the isolated Kuweires Military Airbase. This offensive was later complemented by another effort starting mid-October further south, which would be aimed at cementing government control over the main logistical route to Aleppo from central Syria.

Following the Syrian Arab Army's successful Kuweires offensive, during the Syrian Civil War, which ended with the securing of the Kuweires Military Airbase on 16 November 2015, the Syrian Army launched a new offensive in the eastern countryside of the Aleppo Governorate, with the aim of expanding the buffer zone around the airbase and disrupting ISIL supply lines. 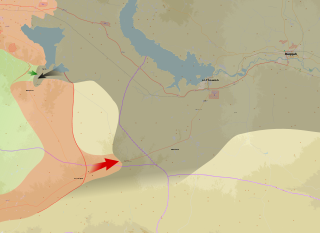 The Ithriyah-Raqqa offensive was a military operation conducted by the Syrian Arab Army against ISIL, during the Syrian Civil War, with the aim of reaching the ISIL-held Al-Tabqa Military Airport.

The 2016 Khanasir offensive was a military operation conducted by ISIL and Jund al-Aqsa, during the Syrian Civil War, with the aim of cutting the Syrian government's only supply route to the northern part of the Aleppo Governorate, which runs through the town of Khanasir. 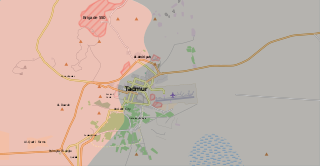 The Palmyra offensive was a military operation of the Syrian Arab Army, supported by Russian airstrikes, to recapture from the Islamic State of Iraq and the Levant the city of Tadmur, which was strategically important for both forces due to its position in central Syria. The city was fully recaptured on 27 March.

This is a chronological account of combat operations in 2016 during the Battle of Aleppo, part of the Syrian Civil War.

The 2016 Hama offensive, codenamed as the Battle for the sake of God by the rebels, was a military offensive operation launched by Syrian rebels during the Syrian Civil War in the northern parts of Hama Governorate as an attempt to relieve pressure on rebels fighting in Aleppo city. 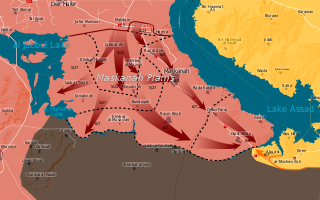 The Maskanah Plains offensive was an operation by the Syrian Army against the remaining Islamic State of Iraq and the Levant (ISIL) strongholds in the eastern countryside of the Aleppo Province, with the goal of recapturing the Maskanah Plains from ISIL and advancing into the Raqqa Governorate.

The Eastern Hama offensive (2017) was a military operation conducted by the Syrian Army against Islamic State of Iraq and the Levant (ISIL) with the goal to secure the Ithriyah-Sheikh Hilal road, the government supply line towards Aleppo, and advance towards Wadi Auzain.

The 2017 Southern Raqqa offensive was an operation by the Syrian Army against Islamic State of Iraq and the Levant (ISIL) in the southwestern countryside of the Raqqa Province.